After two grands prix, world champion team Red Bull Racing hasn't yet secured a pole position or won a race. And, when you remember that last year the Milton Keynes outfit started all but one of the 19 races from the top spot and went on to win 12 of them, that's a pretty poor start by its high standards.

That shaky beginning has prompted AUTOSPORT grand prix editor Mark Hughes to analyse what's at the root of the problem. And it all hinges on hot air - the exhaust gases and their effect on the car's rear aerodynamics, to be specific. Read his insightful conclusions, complemented by Giorgio Piola's technical drawings, in our five-page cover story.

BTCC Brands Hatch - Kevin Turner reports from the opening tin-top meeting of the year, in which Rob Collard (BMW), reigning champion Matt Neal (Honda) and Jason Plato (MG) won the three panel-beating thrashes around the Indy circuit; Plus: all the action from the Porsche Carrera Cup, Renault Clio Cup and Ginetta sportscar series on the BTCC support bill.

WRC Portugal - Mikko Hirvonen kept his cool while all those around him - including Citroen team-mate Sebastien Loeb and Ford pair Jari-Matti Latvala and Petter Solberg - crashed out of the rain-lashed event. The Finn took his first win aboard the DS3, but was then thrown out for a technical irregularity. Through the mess came young Norwegian Mads Ostberg to join the elite list of WRC event winners. David Evans tries to make sense of it all.

IndyCar Barber - Round two of the IndyCar series from the picturesque Alabama road course gave Will Power his first win of 2012 - meaning Roger Penske's Dallara-Chevrolets have now taken two on the bounce. Mark Glendenning was there.

ELMS Paul Ricard - The new-look, European Le Mans Series burst into life in the south of France with the LMP2 prototypes battling at the front. The TDS Racing ORECA-Nissan took the spoils after a fine drive from Mathias Beche and Pierre Thiriet. In the super-close GTE class, Brits Jonny Cocker and James Walker prevailed in their JMW Ferrari 458. Gary Watkins tells the story of the six-hour enduro. 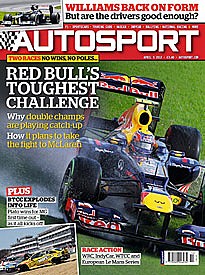 British F3 season preview - Why class powerhouse Carlin's Dallara F308/016 is the most successful car in the sport's history; Plus: race dates and men to watch.

World GT1 season preview - GT-racing saviour Stephane Ratel tells Gary Watkins how he saved his brainchild from the brink of collapse; Plus: race dates and men to watch in the reworked GT3-spec series.

National Focus - Ben Anderson looks ahead to the British GT and Formula Ford UK series ahead of their opening rounds this Easter weekend.

From the archive - Remembering the late David Leslie's Thruxton BTCC win in the Ecurie Ecosse Vauxhall Cavalier in August 1993.

Race of my life - Former F1 racer Julian Bailey recalls his final grand prix - the 1991 San Marino GP, in which he finished sixth for Lotus - and tells Henry Hope-Frost why it was the most memorable of his long career.