Is three-time world champion Sir Jackie Stewart the most influential world champion in Formula 1 history? There's certainly a strong case to be made for such an assertion. His tireless - and, at the time, unpopular - campaign to improve safety almost certainly saved the lives of drivers, officials and spectators.

In the third of our tributes to British F1 legends - edited by 13-time grand prix winner David Coulthard - Paul Fearnley examines what might have been the impact on the sport had Stewart followed his other passion, shooting - a discipline at which he was good enough to represent his country at Olympic level.

We also relive Stewart's rivalry with Brazilian hero Emerson Fittipaldi, with whom he fought for the title in his final year, 1973. Edd Straw talks to both men about their fights and enduring friendship.

Finally, we go under the skin of the Matra MS80, the car in which JYS took the first of his three titles in 1969.

Mark Hughes column - Our grand prix editor examines the paranoia associated with F1 teams as they scramble to uncover the next trick to replace double diffusers and f-ducts.

Paul di Resta interview - On the back of a superb rookie Formula 1 season in 2011, the Scot tells Mark Glendenning that he's fired-up ahead of his sophomore season, particularly with increased backing for the team and the arrival of highly rated fellow second-year racer Nico Hulkenberg. 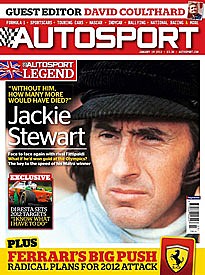 AUTOSPORT International highlights - All the highlights from the world's best racing-car show in an 11-page special from Birmingham's NEC.

Sports Extra - Financial pressures are forcing leading club-racing organisers to run fewer race meetings and cram timetables in 2012, but at what potential cost?

From the archive - As part of our Jackie Stewart special this week, Warwick Banks reflects on his time as the Scot's team-mate in British Formula 3 back in 1964.

Race of my life - David Coulthard tells Charles Bradley how his furious but focused approach to the French Grand Prix in 2000 netted him victory for McLaren over Ferrari nemesis Michael Schumacher.