This is a complicated one. Looking at just the surface of Friday's two practice sessions, you'd say the Red Bulls were set to walk it from the McLarens, with the Ferraris trailing badly behind, setting up great disappointment for the tifosi. But actually it might not be like that - because of tyre blistering.

End-of-straight speeds 30km/h (18mph) higher than Pirelli was expecting - based on its testing with the modified 2009 Toyota Formula 1 car it uses - have triggered blistering of the inner shoulder of the front tyres similar to that seen at Spa.

"I think that Toyota is probably reaching the end of its useful life as our test mule," said Pirelli's Paul Hembery after surveying the initial picture. The tyre company had already reduced its recommended front tyre camber angle from four degrees to 3.25 for this elongated, high-speed track and it is now lobbying the FIA to insist that this limit not be exceeded. This has come about through wildly increased temperatures resulting from extended running at 340km/h (211mph) rather than the 310km/h (192mph) Pirelli was expecting. With the benefit of DRS wings and super-efficient aerodynamics, the top 2011 cars are reaching this speed at three points of the circuit. The fastest speed recorded - that of Vitaly Petrov's Renault - was 347km/h (216mph).

An extra 19mph over forecast may not sound much but it means an increase in wheel rotation of around 250rpm over and above a speed at which inside shoulder temperature was already expected to be marginal given the degree of camber used. A scorching track temperature of over 40-deg C on Friday afternoon also contributed to the problem.

Pirelli is insisting, just as at Spa, that the blisters are not a safety issue but only a performance one. "It means that the soft tyre [the option here] was limited to about 10 laps on some cars, though it's early days and that might increase," said Hembery. But even if we assume the blisters limit running on the soft to 15 laps on Sunday, that means over the 60-lap race on the favoured two-stop strategy the slower medium tyre will be needed for a stint of around 30 laps.

Where it gets interesting is in how each car is using the tyres. The Ferrari - although appearing to be relatively slow here, particularly on the harder tyre - is using its tyres more gently than the Red Bull and McLaren. "It just might be that if Ferrari can keep better control of the blistering because of their car's traits, then they might be able to run a much more aggressive sprint strategy on the softer tyre than the others," suggested Hembery.

McLaren dominated the FP1 timesheets, with Lewis Hamilton 1s clear of Jenson Button, who in turn was around 0.4s clear of anyone else. But in the afternoon, with track temperatures 12-deg C higher, it was the Red Bull that looked the more competitive. This is consistent with the McLaren's recent ability to turn its tyres on almost instantly, faster even than the Red Bull. It seems this was a boon for McLaren in the morning session but a liability in the heat of the afternoon.

Ferrari, the car that struggles most of all with generating tyre temperature - and the harder the compound the worse the problem - was a whopping 2.7s off Hamilton's pace in FP1, with everyone on the hard tyres. In the afternoon on a hotter track, not only did it have the deficit to the front down to 0.8s on the harder tyre, but it was within 0.3s on the soft. If blistering does indeed remain an issue into Sunday and Ferrari can combine this reasonable pace with better front tyre durability, there's no reason why it could not be a major force.

Qualifying though looks likely to be fought out between McLaren and Red Bull, with the track temperature playing a major part in which of the two cars might be favoured. The picture of Friday is further complicated by fuel levels. We believe that McLaren habitually runs these sessions with around 25kg of fuel in the car - enough for around eight laps - whereas Red Bull run more like 40kg. That's a difference of around 0.5s. That still leaves Hamilton well ahead in the morning session, but with the Red Bulls of Vettel and Webber virtually matching Button.

Felipe Massa did a nine-lap run that was similar in pace and duration to that of Button, but the tyres afterwards suggested that the Ferrari could have maintained this pace for longer. Fernando Alonso's running was interrupted by experiments between two types of front wing. If Ferrari can put together a more aggressive strategy than Red Bull and McLaren, it still faces the problem of having to get past the cars that look likely to qualify ahead of it - and this might even include the Mercedes which, in Michael Schumacher's hands, showed great one-lap pace in the afternoon, as well as prodigious straightline speed. That could be where the Scuderia comes unstuck.

There is also the matter of how much slower it will be than the Red Bulls and McLarens once they have switched to the harder tyre. Whether its durability advantage of the soft tyre can overcome these obstacles remains to be seen. If not, the tifosi will be going home in subdued mood. 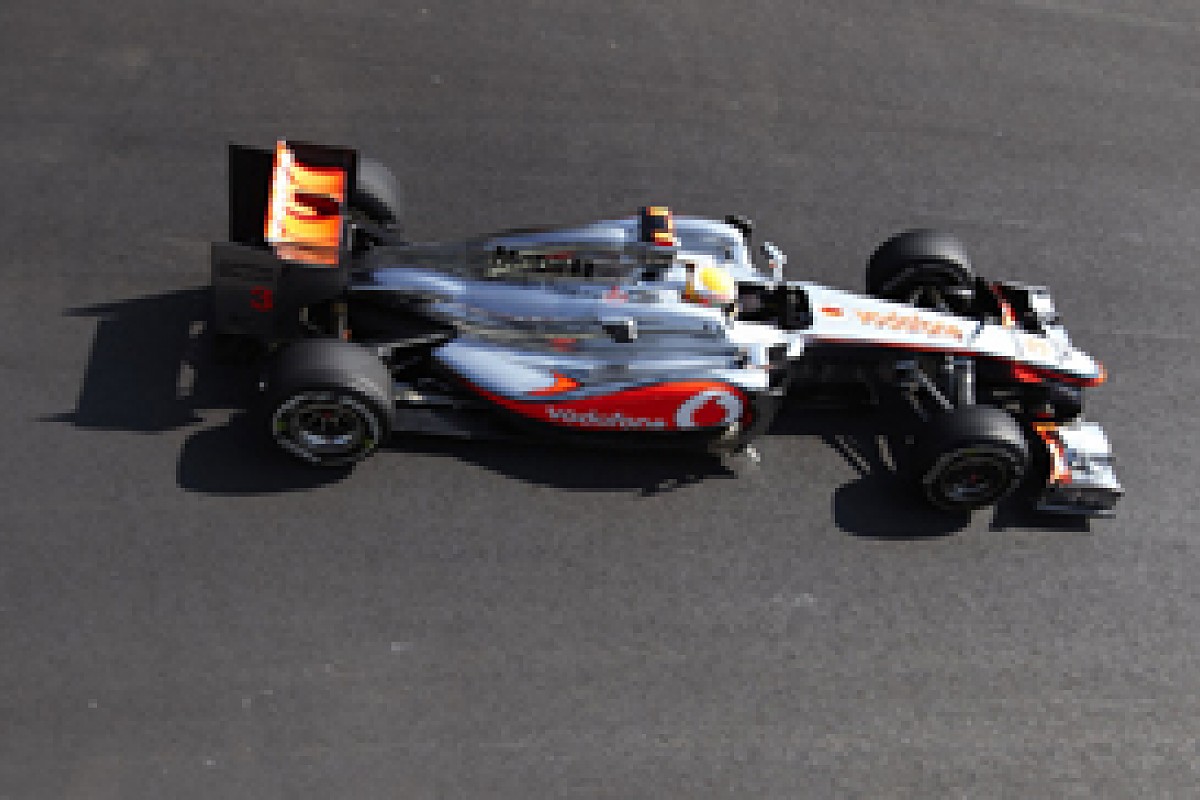