With fever levels already fit to burst following last week's 1986 Formula 1 anniversary special issue, attention turns back to the modern game as this year's combatants return to battle in the Ardennes forest. How have they all been getting on so far?

Mark Hughes looks back on the first 11 races and reminds us of a trend: Sebastian Vettel's first-half dominance for Red Bull. But don't worry, he also explains how chief rivals McLaren and Ferrari have done a lot of catching up in the past three races.

AUTOSPORT technical editor Gary Anderson rates each team's efforts from race to race - expressed as a percentage of their speed relative to the pacesetter - and reveals some interesting trends.

With the help of Giorgio Piola's photographic memory and skillful hand, Gary Anderson outlines the key technical developments seen during the season so far.

Belgian Grand Prix preview - What to expect at Spa this weekend as F1 bursts back into life after the summer break, with predictions from Lucas di Grassi, Gary Anderson and David Coulthard; plus race odds, TV times and track map. 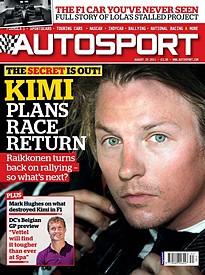 Kimi Raikkonen: what went wrong? - The 'Iceman' quit F1 at the end of 2009 to try rallying, but he's recently decided he wants to return to racing again. Mark Hughes analyses what happened to his F1 career and outlines what the future holds for the enigmatic Finn.

What happened to Lola's F1 dream - Famed British racing car constructor Lola was all ready to make the jump to Formula 1 in 2010 before learning it wasn't invited to the party. Mark Glendenning examines what happened and also reveals what became of many of the other prospective applicants.

Carl Edwards Interview - Roush Fenway Ford's backflipping star tells Andrew van de Burgt why he's ready to usurp Jimmie Johnson from the top of the NASCAR Sprint Cup pile in the run-up to the Chase for the Cup.

WRC Germany - Sebastien Loeb was on course for a ninth straight Rallye Deutschland win before a puncture delayed the world champion's Citroen. Ready to pounce was his team-mate Sebastien Ogier, who took what David Evans reveals was a controversial victory.

Formula Renault 3.5 Silverstone - Getting stuck in traffic trying to get in to Silverstone and missing half of qualifying didn't deter Canadian Robert Wickens, who flew to a double victory for Carlin. Peter Mills watched him do it, then witnessed the unstoppable Alex Lynn take two more Formula Renault UK wins for Fortec.

National focus - An historic - and agonisingly fabulous - Ferrari 512M sports-racer made its first race appearance in almost 40 years at last month's Silverstone Classic. Kevin Turner had to have a lie down afterwards.

From the archive - Twenty years ago this weekend, an almost unknown Michael Schumacher made his F1 debut for Jordan at Spa, while the car's previous incumbent was holed up in jail. We look back on a memorable milestone.

Race of my life - Fifteen years ago, Karl Kling told Andy Hallbery about his favourite race as a works Mercedes-Benz grand prix driver - the day he finished fourth in the German GP of 1954 after matching illustrious Juan Manuel Fangio early in the race.