Ferrari is not the winning machine it once was, and this week AUTOSPORT grand prix editor Mark Hughes analyses why.

The Jean Todt/Ross Brawn/Rory Byrne/Michael Schumacher dream team has long disbanded and Formula 1's most successful constructor is still feeling it. What can be done to return the Scuderia to the glory days? New head of race engineering Pat Fry, a man who spent 18 years at deadly rival McLaren, could just be the man to help turn things around. Remember: you read it here first.

European Grand Prix Preview - Full facts and stats ahead of this weekend's race on the streets of Valencia, with forthright opinion, as ever, from David Coulthard, Gary Anderson and Lucas di Grassi. Betting odds, TV times and a detailed circuit map are included too.

F1 v NASCAR - Take a McLaren MP4-23 F1 machine and a Chevrolet Impala Sprint Cup monster to Watkins Glen and get the drivers, Lewis Hamilton and Tony 'Smoke' Stewart, to swap for the day. Don't believe it? Read our exclusive swapshop special.

Acropolis Rally - Citroen's peacekeeping skills were put to the test with Sebastiens Loeb and Ogier again scrapping over the win in Greece. David Evans reports on another gravel win for the younger Frenchman and explains why seven-time champion Loeb wasn't happy. 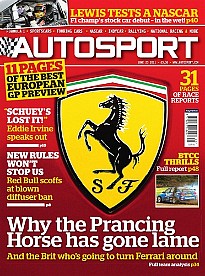 Croft BTCC - Two wins for Matt Neal for Honda at Croft ensured that the lanky midlander heads into the summer break with a tidy points lead. Kevin Turner reviews all the action and rates every driver's performance.

Lausitz DTM - It's two out of two for Audi's Martin Tomczyk. He tells Jamie O'Leary that it's all pretty easy at the moment in the world's fastest tin-top series.

Brno WTCC - The factory Chevrolet Cruzes continue to dominate, with Rob Huff and Yvan Muller taking a win apiece in the Czech Republic.

From the archive - Rob Huff took his first WTCC victory at Brno in 2006 - and he's still winning.

Race of my life - Tony Trimmer recounts his victory - the first for a British driver - in the 1970 Monaco F3 race to Henry Hope-Frost.