After four races of the 2011 F1 season, Sebastian Vettel holds a commanding advantage atop the drivers' championship points table, thanks to three victories. His Red Bull Racing team-mate Mark Webber, on the other hand, has had a much tougher time of it, with a fifth, a fourth, a third and a second on his score sheet.

Despite the tricky start, the Australian remains upbeat and optimistic that he can fight for the title he came close to securing last season. In a frank conversation with Edd Straw in this week's magazine, Webber admits he's probably in the twilight of his career, but he's still not giving up without a fight. And don't forget he took consummate, back-to-back victories in last year's Spanish and Monaco GPs - the next two races on the 2011 schedule.

Mark Hughes - our regular columnist explains how races may be won or lost in the pits this year, thanks to the high number of stops drivers are having to make.

Spanish GP preview - David Coulthard, Gary Anderson and Lucas di Grassi hope that the new regulations will allow a bit of overtaking on a circuit not historically famed for such activity.

Force India feature - The British team has had a tricky start to the year, masked by rookie Paul di Resta's excellent performances thus far, but the Silverstone-based squad is fighting back, as Edd Straw reveals. 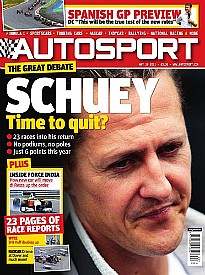 From the archive - Nick Heidfeld recalls his torrid time in the Austrian GP of 2000 for Prost - and a collision with team-mate Jean Alesi.

Race of my life - Kurt Thiim looks back on his double DTM success for Mercedes at Singen in 1995, where he beat tin-top rookie Dario Franchitti.