"I'll give it another try next lap," said Sebastian Vettel over the radio, having just gone off on standing water through Turn 11 part-way through first practice. Running on intermediates on a track that was becoming wetter once more, having earlier dried from full-wet levels, he was pushing hard.

He never got to complete that next lap, because from the moment he got his front right onto the astro-turf on the exit of Turn 8, he was a passenger. The Red Bull clattered hard off the barrier and was sufficiently damaged to prevent him taking part in the dry afternoon session. This left Mark Webber to compress the donkey work of what would normally be four sessions of dry running (two cars x two dry sessions) into a single afternoon session. With him concentrating on long runs, we didn't get a direct comparison of Red Bull raw pace with that of the McLarens and Mercedes, leaving a tantalising question hanging in the damp air.

Some questioned why Vettel was pushing so hard in a wet session, when the forecasts were all saying practice two would be dry. But it wasn't simple bravado, it was homework. Running on inters with the track becoming wetter, it was the perfect opportunity to find what the changeover lap time from inters to wets would be, information that might have proved valuable should the race day weather be similarly changeable. This required him to be pushing hard.

So it was the McLarens and Mercs heading the times in the afternoon, with Jenson Button marginally ahead of Nico Rosberg on what appeared to be similar fuel loads. Button's best lap was just 0.2s adrift from the fastest time set all weekend last year, suggesting that dry qualifying will see that time comfortably eclipsed.

Despite the hot pace, there were no concerns about the durability of the front-right tyre through the huge demands of Turn 8 - up to 5g for over 7s. Coming into the event this was the big concern of the teams, less so Pirelli itself.

"There were no signs of any structural problems with the right-front, even from teams that managed as many as 20-laps on the soft," confirmed the company's Paul Hembery, "but I'd have been surprised if there were. We adopted a pretty conservative approach in the construction of this tyre and Turn 8 here was one of the key corners we based our simulations around."

Should the rain hold off between today and tomorrow's qualifying sessions, the rubbering-in of the track is expected to allow even longer stints. "With a rubbered-in track, I'd be expecting a three-stop to be the favoured strategy," continued Hembery. "If the build-up gets washed off, then we might be looking at four, but even then I think three would remain feasible."

In terms of single-lap pace the soft tyre proved around 1.3s faster than the hard and the wear rate appeared much the same. An experimental harder version of the hard was tried by selected teams and this had better wear characteristics, but took longer to warm up. Pirelli is set to advise the teams that in subsequent races this tyre will become the new hard.

The improved Mercedes pace seen at Shanghai was evident again here, with Rosberg's best being less than 0.1s adrift of Button and the Merc was consistently the fastest in the slow-medium speed bends of sector one, where its short wheelbase would be expected to give better response than the longer McLaren. Through the sixth gear blast of Turn 8 however, the Mercedes drivers were visibly busier at the wheel than the McLaren guys. The McLaren still appears to hold onto its pace longer than the Mercedes too.

But where does the Red Bull fit in here? Probably at the front, despite its limited running today - and despite the single new-spec exhaust being destroyed in Vettel's accident. But there is a caveat: so far the car has appeared to find more drag reduction from its DRS wing than the McLaren - and with its free use in qualifying this has flattered its advantage compared to race day when it can only be used in the specified zone.

That has been the pattern in the first three events, but here the Red Bull has a new medium downforce rear wing and this may well reduce or even wipe out the Red Bull's DRS qualifying advantage. The McLaren has received only a few minor drag-reducing updates since Shanghai and its chances of beating an RB7 to pole for the first time this season, whilst reasonable, especially given the compromised preparation of Red Bull, must be considered still as less than even.

Ferrari remains some way adrift of the McLaren/Mercedes single lap pace, but Felipe Massa put together a promisingly quick and consistent multi-lap run. Fernando Alonso was hindered by hydraulics problems.

Ferrari's new wings and brake ducts were frozen in concept before the team isolated the problem it has with its windtunnel and as such do not directly address the car's main deficits. Alonso said he believes they have found him around 0.2s but that bigger improvements should be seen at Barcelona with updates based on their latest tunnel understanding. Ferrari used the Toyota windtunnel in Cologne for comparison with its own in order to get a fuller understanding of where the correlation problem lay.

Chief aerodynamicist Nikolas Tombazis explained recently just how delicate the airflow of the latest generation of cars is and how this has contributed to the team's difficulty: "An F1 car is made of a series of vortices or streams that interact with the car. Compared to the past they are a lot more delicate, brought to the limit, and it's easy to find inconsistencies in the translation to the track." The team this year increased its model size from 50 per cent to 60 per cent and this too may have contributed to the tunnel problem, in giving more airflow interference from the tunnel walls.

There's a lot of pressure on Red Bull here, and Vettel in particular, with his minimal preparation. He has shown in the past he can rise to such challenges, but this just could be the opportunity for Webber to turn the tables on the champion for the first time this year. Webber vs Vettel, with two McLarens just behind piling on the pressure? Didn't that happen here last year? 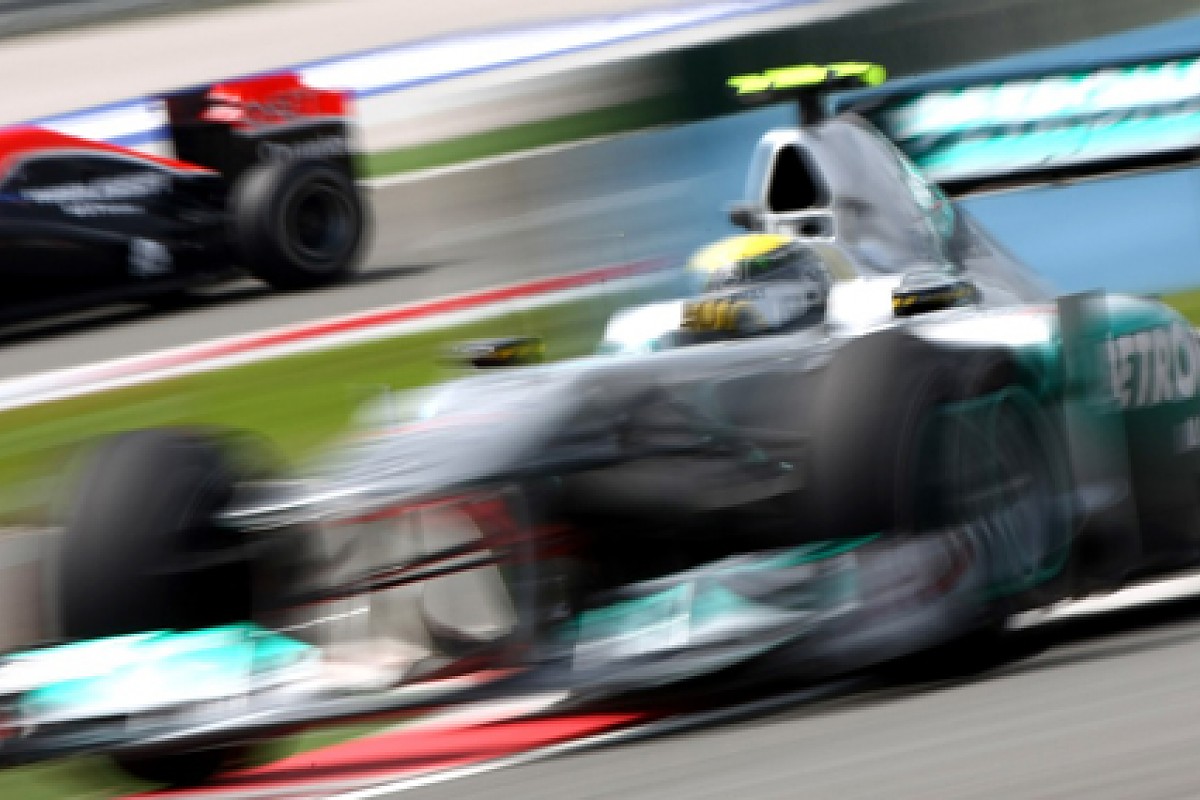