We analyse the revival of Renault's F1 team in this week's issue. The former double world championship-winning squad was in the news for all the wrong reasons during the build-up to the 2011 season. It courted controversy over its commercial tie-up with Lotus and then suffered the indefinite loss of its superstar driver Robert Kubica in a freak rally accident.

Since then, the team has called on sophomore number-two Vitaly Petrov and experienced stand-in Nick Heidfeld to lead its charge. And what a charge it's been.

Mark Hughes looks back on the team's superb start to the year, courtesy of two podium finishes in the opening two races, and examines what this lean, privately-owned squad must do to keep up the momentum against the cash- and resource-rich frontrunners.

Mark Hughes column - AUTOSPORT's grand prix editor shares his enthusiasm for this weekend's Turkish GP in which the infamous Turn 8 will play a significant part in tyre wear and, therefore, tactical gamesmanship.

Vitaly Petrov Q & A - The Russian Renault racer tells Edd Straw that he's pleased with his start to the season and that he's keen to make further impression in Kubica's absence.

GP3 season preview - Ahead of only its second season, GP3 has attracted a packed grid made up of top teams and competitive young drivers. Glenn Freeman analyses what effect this will have on the rival F3 Euro Series; Plus calendar and driver/team line-ups. 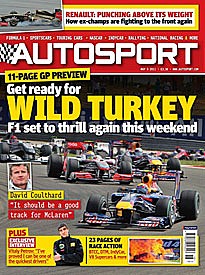 Renault 3.5 Spa - Carlin moved to the top of the Renault 3.5 winners' list with its 19th and 20th series wins - delivered in Belgium by Robert Wickens and Jean-Eric Vergne. Peter Mills reports.

IndyCar Sao Paulo - Delayed until Monday after torrential rain caused havoc on the Brazilian streets, IndyCar's latest championship round was won by Penske ace Will Power. Full report and analysis.

From the archive - We revisit Indycar racing's visit to Silverstone back in 1978.

Race of my life - Racer and TV personality Tiff Needell recalls his first outing in a Toleman-run March-BMW in the 1978 European Formula 2 championship finale at Hockenheim.