The racing might have been better than in the season-opening Australian Grand Prix two weeks earlier, but the same man eased to victory.

Yes, Red Bull wunderkind Sebastian Vettel took another maximum score to continue his perfect score in F1 2011, but behind him, there was scrapping aplenty. Mark Hughes reviews a complicated race - there were 58 pitstops for tyres! - in which strategy variations brought about by tyre wear ensured teams and fans had to concentrate.

AUTOSPORT's comprehensive report includes full qualifying appraisal, an analysis of how the high Malaysian temperature and humidity played havoc with set-up and strategy, a technical debrief from the pen of Giorgio Piola and the brain of Gary Anderson, as well as driver-by-driver weekend round-ups and full results.

Mark Hughes - AUTOSPORT's grand prix editor unravels the mystery behind Red Bull's aerodynamic advantage, thanks to the team being able to run the front of its car closer to the ground. It seems it could be a science that Adrian Newey and his sheriffs have worked on for two years...

World GT1, Zolder - Gary Watkins witnessed a turn-around in form for the All-Inkl Lamborghini squad, with Marc Basseng and Markus Winkelhock taking a Belgian victory double in the Murcielago R-SV. 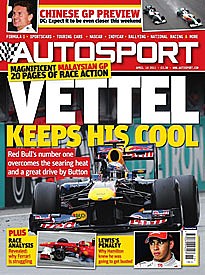 IndyCar, Barber - After failing to convert pole into victory on the Florida streets of St Petersburg in the season opener, Penske ace Will Power made amends on the Alabama road course. Chuck Bradbury Jr explains why not everyone was happy with Power's performance.

FIA Formula 2 season preview - Alex Brundle returns to the series after a tough year in British F3 and Martin's lad explains to Glenn Freeman why he needs to win races; plus entry list and calendar.

Formula Renault 3.5 season preview - Peter Mills talks to Aussie sensation Daniel Ricciardo about his title-favourite status and wonders how he'll dovetail his championship assault for ISR with his Friday-driving role for Red Bull in F1; plus entry list and calendar.

British F3 season preview - Back in 1994 Dane Jan Magnussen blitzed the British F3 series, winning 14 of the 18 races. This year, his teenaged son Kevin is out to emulate him. Ben Anderson talks to him about how tough it's going to be; plus entry list and calendar.