F1 season preview - Don't miss our traditional and in-depth, 63-page preview to the new Formula 1 season, which kicks off - finally! - at Albert Park in Melbourne next weekend.

With pre-season testing at a close, the exact state of affairs regarding the competitive order is undecided. Red Bull and Ferrari look to have an advantage, with McLaren, Renault and Mercedes all playing catch-up.

But who knows what will really happen in Australia next weekend? And how will the new-for-2011 moveable rear wings and marginal Pirelli rubber fare?

The 63-page preview to what many believe will be another cracking season contains facts, figures, opinions and technical analysis:

Lewis Hamilton - Tony Dodgins wonders if the new rules will boost the Brit's chances of a second world title.

Passing problem - Overtaking has declined dramatically in the past 20 years. Mark Hughes examines why.

Wing and a prayer - How will the moveable rear wings work. Edd Straw plays science teacher.

Di Resta Q & A - The Scot is fired up for his maiden season of F1 with Force India. 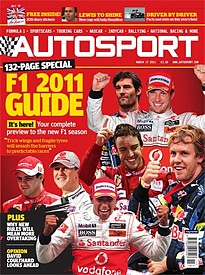 The science of tyres - Mark Hughes dons his white coat to explain the way tyres behave, physically and chemically.

Team by team guide - Analysing each of the 12 teams and their drivers on the 2011 grid.

Circuit guide - Facts, figures and maps of all 19 F1 venues.

Plus Mark Hughes - Our grand prix editor examines why McLaren has struggled in pre-season testing and suggests there could be some exhaust-blown diffuser trickery up its sleeve.

Keep an eye on AUTOSPORT.com in the coming days for the website's package of F1 season preview features and analysis.