Following the well-publicised F1 career-stalling shunt for Robert Kubica in a rally, Adam Cooper talks to another man for whom a love of rallying got in the way of the day job. Twenty-five years ago Marc Surer survived a violent accident in which his co-driver, Michel Wyder, was killed.

The Swiss driver talks candidly about that horrific smash in the European Championship Hessen Rally in 1986 aboard a Group B Ford RS200 in which he was badly burned and broke his legs and pelvis. The accident, which occured between the Belgian and Canadian Grand Prix, brought to an end Surer's 76-race F1 career.

Surer empathises with Kubica's desire to get out there and drive, particularly with the monotony of Formula 1 and the tendency for technology to dominate, but warns that Kubica mustn't underestimate his rehabilitation time. 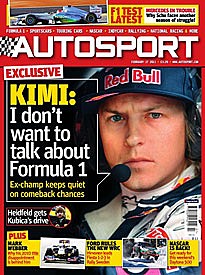 Mark Webber - Can the Australian rediscover his mojo after coming so close in 2010? Mark Hughes analyses how the Australian's attitude