The fascinating championship battle may have increased in intensity throughout the Suzuka weekend, but a quick peruse of the pitlane showed that things are no less the R&D departments up and down the paddock.

Despite F-ducts being outlawed for 2010, Red Bull and McLaren brought new versions of the system to Japan, while several teams experimented with interesting aero devices for one of the most challenging venues on the calendar.

The normal mounting position for brake callipers is horizontally at the bottom of the upright assembly. Because F1 chassis are now higher, the lower wishbone is also higher, which has created the opportunity to mount the front brake calliper under the wishbone.

If the calliper is mounted horizontally on the upright, the assembly provides a lower centre of gravity. Whenever the car corners a force is exerted on the car. There is no infinitely stiff assembly, so when there are high cornering forces you can get brake knock off and you arrive at the next corner with the brake pedal not as solid as it should be.

At Suzuka, particularly in the fast esses, there is a lot of very high-load direction change. Red Bull moved its callipers up to the vertical position, which put them in a more neutral position with the axle and therefore didn't suffer the same consequences of knock off.

It also probably allowed the team to change the suspension geometry a bit, and it's in a better position for cooling the calliper. Red Bull has had brake problems for most of the year and has addressed that with this repackaging of the front upright assembly.

McLaren and Red Bull both arrived at Suzuka with new versions of their F-duct systems, which in a way incorporated an innovation first introduced by Renault. Instead of blowing the air onto the rear flap of the wing, the system now blows the main plane. When you do that, you place the slot that carries the exiting air - that stalls the rear wing - much further forward.

When it stalls the wing, it produces a bigger percentage stall so you get a greater straight-line speed advantage.

Not only that, but the F-duct system that stalls the main plane still has air flowing through the normal slot gap, keeping the flow on this component attached. This makes the flow much more consistent when the wing is stalled and re-instated. In other words, when the driver takes his hand away from the vent, the flow to the wing will re-attach a lot faster and a lot more consistently.

One factor to overcome when using the F-duct is earning the drivers' confidence in the system. He needs to believe that he will have the downforce back when he arrives at the braking point.

Both teams arrived at Suzuka with this device, but only Red Bull raced it. McLaren reverted back to its older system after troubled practice sessions. Following Lewis Hamilton's accident, they couldn't get it all to work in time.

It was Renault that first started using the system that stalled a bigger percentage of the rear wing and we've really seen the advantage this can give. Renault wasn't great through the speed traps for most of the year, but in the last few races it has used this system and you can see it's now one of the quickest.

As you develop a car, some components affect other components elsewhere. The exhaust-blown diffuser is one of these components.

You want to try and curve the outer wall of the diffuser as much as possible to get the low pressure air behind the rear tyres to help the diffuser extract air from under the car.

The exhaust-blown diffuser has high-speed flow coming along this vertical diffuser wall. This allows more curvature on the diffuser wall, which Ferrari did for Suzuka. It's only a tiny change, but as you change pieces on the car you find that you can do other things elsewhere. As you optimise one component, you have to look at how you can then optimise another one.

There is also a small wing arrangement on top of the rear crash box. Teams want to mount the wing on central pillars here, and there is a 150mm-wide position at the crash box where you are free to do what you want. Ferrari has put a wing there, as a few other teams have also done. That wing helps the air flow to stay attached on the centre section of the rear wing.

Standard front brake ducts lose downforce, so you want to use the front brake duct to try to create more by using turning vanes to enhance the air flow to the rest of the car coming along behind. The ducts have a hole at the front to pass air to cool the brakes, but the other parts of the duct are turning vanes of one sort or another. 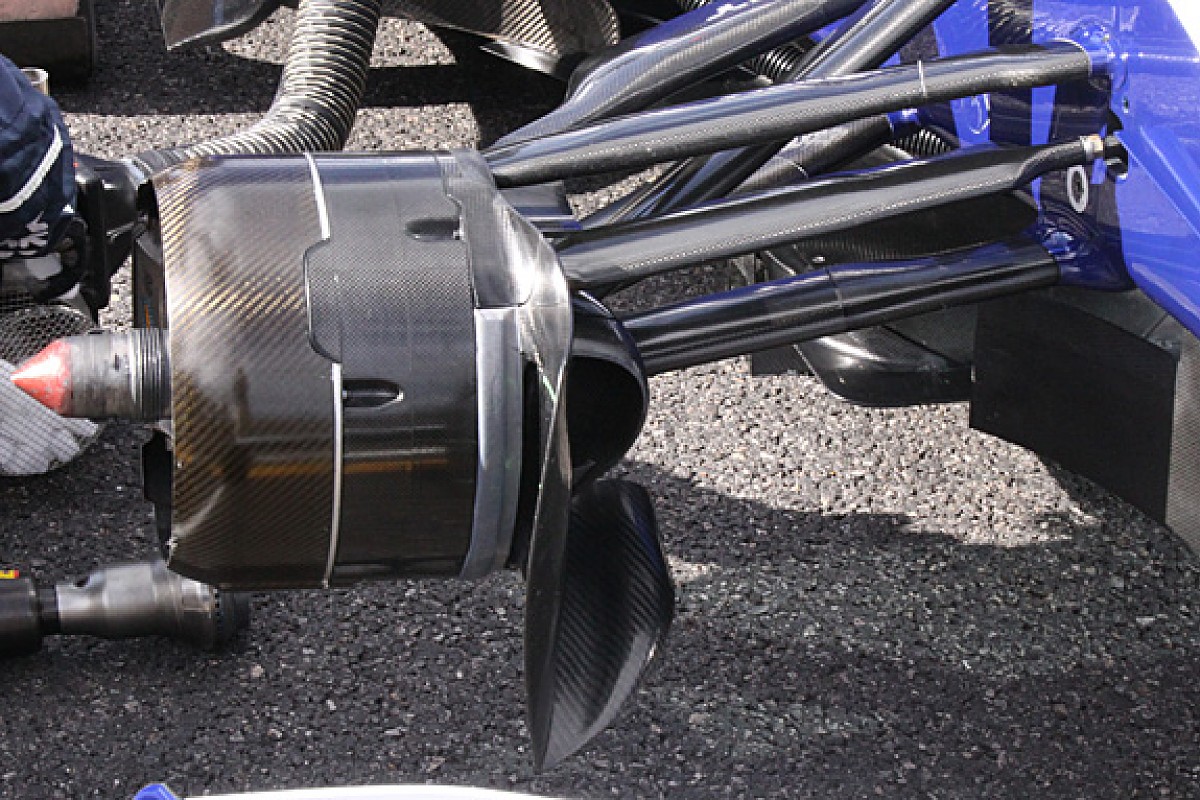 If you can produce downforce at the upright assembly, it goes directly into the tyre. If you produce downforce on the car itself, the load has to go through the suspension before it gets to the tyre. When the car is moving around quite a lot, it creates and loses downforce as it moves up and down, and the downforce is not able to react as well through the suspension. Any downforce you can produce by the brake duct is always on the tyre, which is good for much more consistent downforce.

Downforce-producing devices have to be mounted on the sprung chassis, but there is a box area where you are allowed to put brake ducts and you can fit turning vanes in this area - they are just called brake ducts.

Williams is one team that has pushed this hard. At the end of the day, the FIA should stand up and say 'that's not a brake duct'. But other teams have copied it too.

CFD is a good tool for understanding the flow around the brake duct and the wheel. In the last few years, people have also been able to measure the downforce produced at the wheels in the wind tunnel, even when they are rotating, which is a difficult task. Since people have been able to do this, we have had brake ducts with vanes sprouting out of all sorts of areas.

A rotating tyre affects airflow in the way air spills off it, which is detrimental to the underflow on the car. Williams has introduced a large vertical tyre fairing which has tidied up the flow and improved the overall performance of the underfloor of the car.

The fairing has created a more constant flow between the inside of the wheel and the chassis, so there is less aerodynamic change when steering lock is applied. On the inside of the rear brake duct, there are quite a few turning vanes that will produce a bit of downforce and help the air flow to the underfloor.

Renault has gone a bit further with the vanes around its rear brake duct. The image shows a piece sticking out at about one o'clock, another on the trailing edge at about nine o'clock and another vane at about 11 o'clock. These are all about producing downforce on the brake ducts and re-aligning the air flow between the wheel and the bodywork.

Because peoples' understanding has become greater over time - and as they've learned to accurately measure the downforce at the wheel - the ducts themselves are now smaller, neater and tidier, which has allowed more room for aero devices to produce downforce there.

Everybody does it, some teams just push it harder than others. 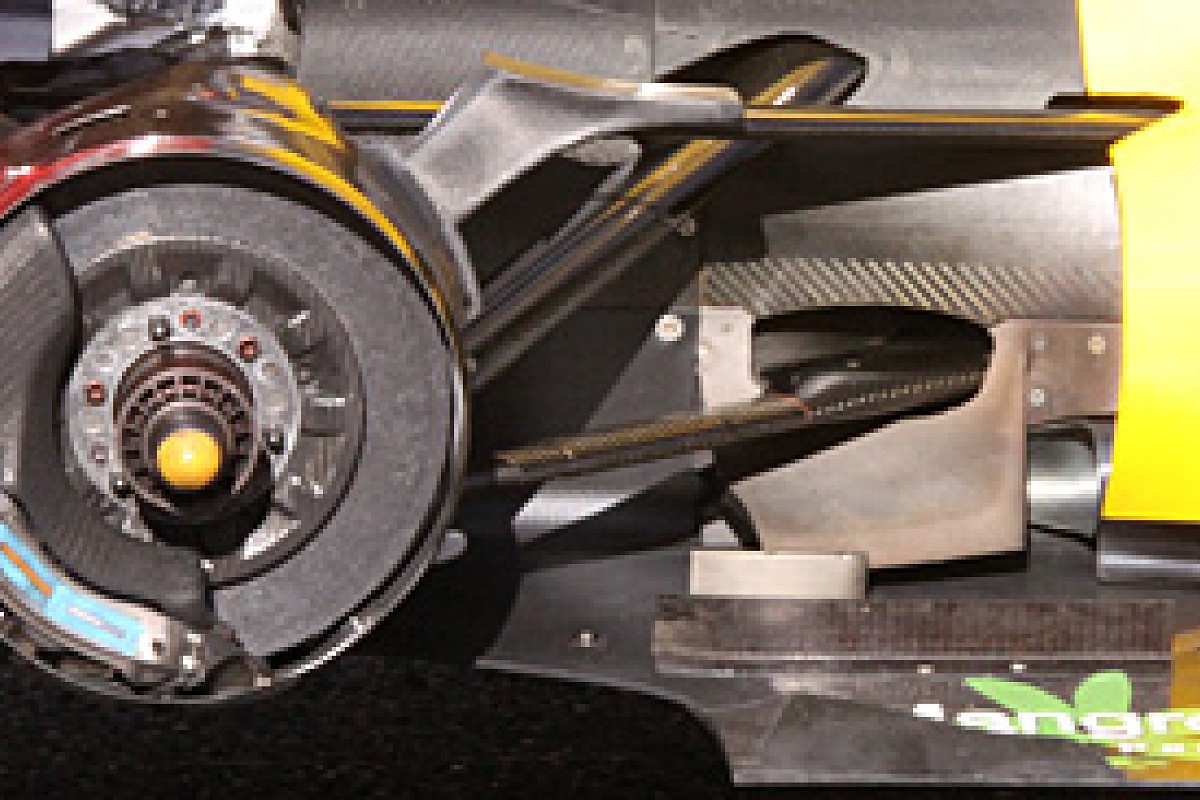