Suzuka is the perfect stomping ground for Red Bull. The question is, just how dominant will the RB6 be on the long sweeps of the Honda-owned track?

Singapore started to answer the question of whether the car's prodigious speed had been pegged back by the more stringent flexible bodywork tests that the FIA has introduced, but the Japanese Grand Prix should give us a definitive answer. Expect Red Bull to be at the sharp end this weekend, but keep a close eye on the gap to McLaren and Ferrari.

Last year, Sebastian Vettel took a comfortable pole position despite being fuelled for more laps than closest challengers Jarno Trulli and Lewis Hamilton. The memory of his dominant victory means that he heads to Suzuka with a spring in his step and perhaps a psychological edge over team-mate Mark Webber. Last year, the Australian had a catastrophic weekend, crashing heavily in free practice three, missing qualifying and starting from the pitlane. To make matters worse, a loose headrest and then a puncture ruined any chance of him salvaging a points finish.

Knowing the Australian, if the memory of 2009 has any influence at all, it will be a positive one as he makes amends. If a Red Bull driver does win, that man's identity could have a major say in the destiny of the crown. For Webber, it would put him over one race win ahead of his team-mate in the standings; for Vettel, it would put him within striking distance of running point on Red Bull's title charge.

But they have more than just each other to worry about. McLaren pairing Lewis Hamilton and Jenson Button are the most likely to challenge them, with Ferrari team principal Stefano Domenciali admitting after Fernando Alonso's Singapore Grand Prix victory that "Japan is going to be a track where we have to be more defensive". The McLaren has performed well on quick tracks like Silverstone and both of its drivers need a big result to regain the championship momentum.

In Hamilton's case, he must stop the rot after retiring from both the Italian and Singapore Grands Prix after on-track clashes (the more recent of the two being a genuine racing accident). He's only 20 points off the championship lead, and if he can upset the form book in the land of the rising sun, what looks like a big gap will shrink significantly. As for Button, he has been hanging on to the title-chasing group after losing a hatful of points courtesy of Vettel's mistake at Spa and is teetering on the brink of losing touch.

However, he has an excellent record at Suzuka. He starred there in 2000, qualifying fifth for Williams, and has only failed to finish in the top eight once when he has made the chequered flag. Considering that was in the dreadful 2008 Honda, that's as good as a full house, so don't be surprised if he gives Hamilton a run for his money.

As for Alonso, the Ferrari struggles on tracks with long corners and a par finish for him could be fifth. He'd probably take 10 points as a successful exercise in damage limitation heading to three circuits where the F10 is expected to be far more racey. He at least has a wing man on his side in team-mate Felipe Massa, as Ferrari supremo Luca di Montezemolo has made clear - and the team has prior form when it comes to using its second driver as a Suzuka spoiler.

The battle for the best of the rest is once again expected to be close, although Williams, Mercedes and Renault are unlikely to be able to get among the title challenges. In Singapore, the three teams were very closely matched, and Suzuka will tell us which has made the best progress aerodynamically with their late-season upgrades. Championship-wise, Renault realistically needs to start chipping away at the 35-point advantage Mercedes has in the battle for fourth in the constructors' if it is to overhaul the German marquee.

Force India is also likely to be in the fight, although Adrian Sutil and Tonio Liuzzi have struggled in qualifying in the second half of the season. But the team was strong in Japan last year, with Sutil fourth on the grid, giving reason for optimism.

But they are merely support players. All eyes will be on the five-man shoot-out at the front at a track that has been the stage for some classic title run-ins over the years. 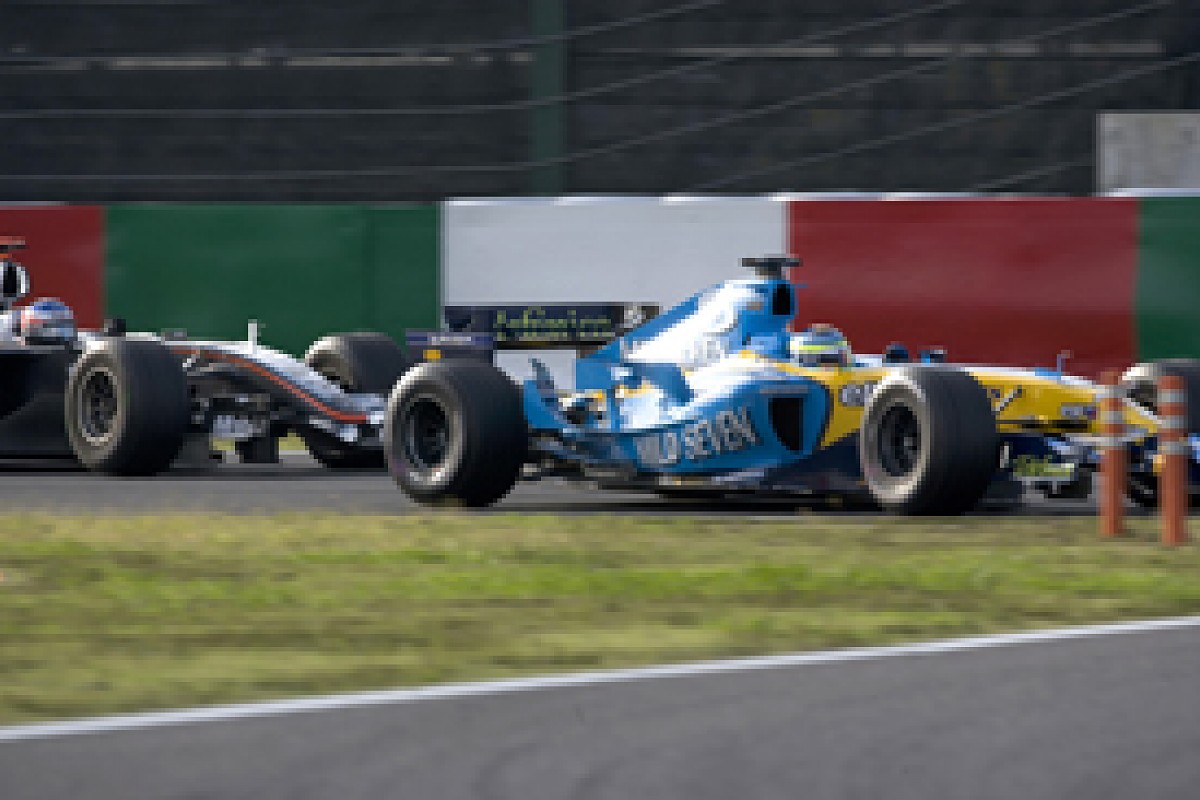 The 2005 Japanese Grand Prix has gone down in history as one of the greatest in the history of the world championship - and with good reason.

Kimi Raikkonen had already lost the world championship fight to Renault's Fernando Alonso, but he was in no mood to relax despite finding himself 17th the grid courtesy of rain hitting single-lap qualifying. AUTOSPORT's Mark Hughes described what happened in the race as "90 minutes of some of the most stunning racing narrative the sport has produced" as the Finn charged up the field.

Up to 12th at the end of the first lap, Raikkonen initially looked less likely than world champion Fernando Alonso to carve his way to the front from a lowly grid position. He soon found his way past Felipe Massa, Antonio Pizzonia and Jacques Villeneuve, but was bottled up behind Schumacher - who had been passed by Alonso in that famous move around the outside of 130R on lap 20.

He failed to jump Schumacher in the pits and eventually overtook him for fourth with 23 laps remaining, by which time Alonso was now behind him, largely down to losing almost nine seconds courtesy of erroneously having to give a place back to Red Bull driver Christian Klien after passing him by straightlining the chicane - a place he had already handed back once!

Raikkonen then leaped Mark Webber and Jenson Button after posting four quick laps before his stop. This set up a simple chase, with Renault's Giancarlo Fisichella 20 seconds ahead with 15 laps to go. This is when Raikkonen really earned his win.

With a few laps to go, he was on the Italian's tail. The Renault driver briefly absorbed the pressure, but Raikkonen had a run on him out of the final chicane at the start of the final lap. At Turn 1, Fisichella went defensive and the Finn blasted around the outside at close to 200mph in one of the most famous moves in F1 history.

"I was pushing 100 per cent as he was catching me," said Fisichella. "He was just much quicker. I was struggling with the rear end in slow-speed corners and with traction. He seemed to have better traction out of the hairpin and chicane. He was just quicker, as usual. What can I do?"

On a day when Raikkonen was an unstoppable force of nature, what indeed...

"Red Bull will be untouchable. Too many high speed corners for even Ferrari to challenge the Red Bulls. I'm not sure why some think Mclaren will beat Ferrari this weekend, but we'll see. Vettel is desperate to score big points over Webber. All Webber needs to do is not to lose his second place. I think Vettel will win because he needs it and is going to do anything to win over Webber, and Webber should simply chill out and take a safe second place. Webber has the advantage that Lewis and Alonso can beat Vettel on the other tracks to protect his championship lead over Vettel, so I hope Webber is smart and won't take any risks"
Simon Says

"I'm in the camp that thinks McLaren, not Ferrari will be Red Bull's closest challenger - but I said that about Singapore as well. Anyway I think the Suzuka layout should play more to McLaren's strengths. I've been looking forward to Suzuka for some time on the MP4/25's behalf, and more so after learning that McLaren will bring more updates. I think winning should be realistic." "
race addicted

"I think the Red Bulls will be mega for the first 45 seconds of the lap or so (up to the hairpin). Let's hope they don't mess up the start or drive each other - or others - off the track. We need this championship going down to the final in Abu Dhabi, it's been an epic season, it would be a shame for it to end on an anti-climax."
Ferrari_F1_fan_2001