There was plenty of talk about flexi-wings, flexi-floors and exhaust-blown diffusers at Hockenheim and the Hungaroring.

But with teams still pursuing aggressive development plans, these weren't the only technical talking points of the past couple of weeks.

If you look at the Red Bull on TV, it's very clear that the front wing moves a lot more than that of, say, McLaren. That's over kerbs, bumps, whatever. There's no question that it's more flexible.

The regulations allow the front wing to deflect by no more than 10mm under a 50kg load in the load test. That load is applied close to the outer end of the wing. When the car is at maximum speed, the front wing will generate over 10 times that load. If your front wing stiffness is linear, which it usually will be, that can easily account for 50mm or more deflection on each side of the wing. So the wing can deflect that much and still be completely legal.

McLaren's wing is very stiff. This highlights something that is more important when looking at flex-wings than overall downforce and the benefit of ground effect at the front of the car. When the airflow stalls on the McLaren front wing, the loading on the suspension is reduced and it extends, allowing the car to rise. The wing will then start working again and pull the car down.

For Red Bull and Ferrari, who both have flexible wings, when the airflow separates, the wing simply deflects less and between bending and airflow separation it finds a happy medium. This leaves the suspension more or less untouched and makes for a much more stable car. In the TV pictures, the Red Bull front wing moves a lot while the car stays stable. By contrast, when you see the McLaren, the whole car is bouncing up and down.

It's not just about downforce, it's about having an all-round better car. It's about packaging, not just having a magic component or concept that makes the car better.

There's also an exponential effect when considering the Red Bull front wing. The Red Bull probably generates more downforce at low-to-medium speed than anyone else, which then flexes the wing down. This increases the ground effect and creates more downforce, which further flexes the wing. The wing will do all of its bending up to, say, 200km/h, at which time because of the aerodynamic characteristics you will start getting airflow separation.

Because this separation is well controlled, the wing then stays at this level. By contrast, the McLaren front wing is too high at slower speed, gets a little lower at higher speed when there is more downforce and then starts bouncing. The whole package of the McLaren doesn't work well with what flexibility it has in its front wing.

You do what you are allowed to do by the regulations, and both Red Bull and Ferrari have done just that to create what are, right now, the best two cars on the grid.

There has been a lot of talk about flexible floors, but there are a couple of things against it - the floor tray load test and the need for the stay between the floor and the chassis having to be rigid. People have had floors bending for a long time, but if you're doing it aerodynamically, it's hard to see how you wouldn't wear the plank by more than the permitted one millimetre. 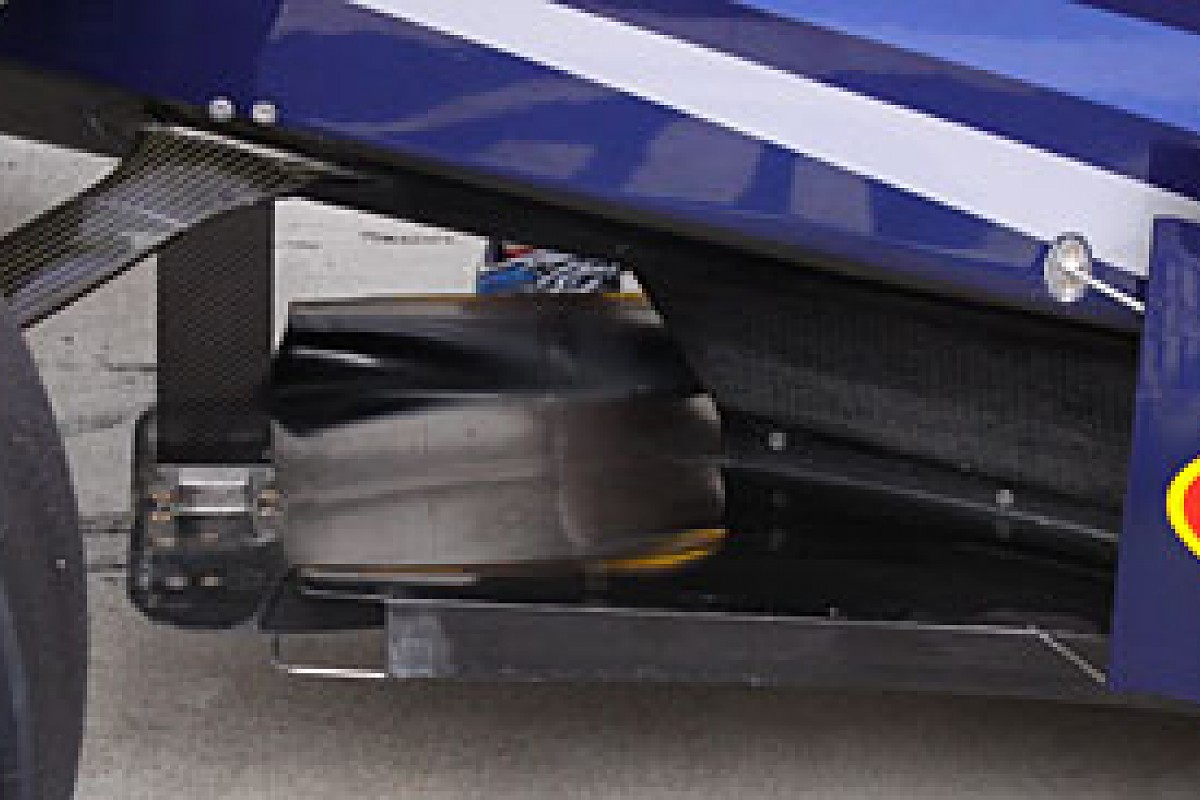 It's ambitious to be able to get the undertray and plank to bend up enough to avoid this and it's hard to see how that is achievable without using some kind of mechanical device, which would be flat out illegal. And I don't believe that the Red Bull is illegal.

What's more, if I was at Red Bull and had something that wasn't legal, I would have backed it off at the Hungaroring rather than being 1.2s faster than anyone else in qualifying. That is a sign of how confident the team is that the car is legal.

As usual, one or two teams have been very clever, and the ones that haven't been are suffering from a bout of sour grapes.

Ferrari's new front wing has played an important role in the Scuderia's return to form, not just because of flexibility. At Silverstone, the team introduced a triple-element front wing, which in Germany and Hungary really allowed the car to come into its own. Because a triple element front wing has two slot gaps, it inherently has less surface area than a two-element one. There was probably an overall loss of downforce in the windtunnel, but because it's easier to control the airflow and less prone to separation, it's much easier to achieve a consistent setup.

You'd rather have a consistent car aerodynamically than one that has a little more downforce but is harder to control. Mercedes is a great example of this - ever since the team (as Brawn GP) switched to a two-element front wing last year, it has struggled.

The front wing is the single most important performance component on the car, because it's the thing that alters the airflow to the entire car. Optimising the wake from the wing and minimising the negative effects is critical. The worst thing you can do is to have fewer elements because it's harder for airflow to stay attached to a longer element.

Putting in slot gaps costs you downforce, but you end up with better quality airflow because it's easier to manage any separation problems. You will always get a certain amount of airflow separation, but this allows it to re-attach a lot easier.

Sometimes you have to give something up to get a net gain, and if you're messing up the airflow to get a few extra points of downforce and then expecting the air to work when it hits the floor, you're on a hiding to nothing. Ferrari was the first team to bring in a triple-element front wing years ago, and many of the other teams were scratching their heads.

It has realised again that this is the way to go. You can get better figures in the windtunnel, but in the real world its characteristics are far better. Red Bull has done this as well because Adrian Newey has such a good grasp of how the airflow works without having to rely on simulation.

The Hungary rear-wing package was all about producing as much downforce as possible, and we're seeing how the F-duct concept being declared legal has open the doors to a change in wing philosophy in that you don't need a slot gap to run across the wing from front to back.

Because of the F-duct, you can create a wing with an extra slot in the back surface of it and still comply with the closed element regulation. The regulations state that you can have a maximum of two closed sections in the rear wing, but there's nothing to say you can't have a closed section with a slot through the back of it.

The Renault rear wing takes in airflow through that central section in the upper surface, as does the Mercedes, and runs it through the wing chamber. Then there's another slot in the back of the main plane, which that airflow can then be sucked out of because the low-pressure airflow on the undersurface of the wing will stay attached for a certain period of time; but then it can't stay attached any longer.

So if you have a slot and you have air volume inside of that chamber, air will be sucked out of there to help to keep the air attached to the surface of the wing until it gets to the main slot gap, which is between the flap and the main plane.

Renault has got the inlet in the middle of the wing in the top surface and its also got two outer inlets, which equalises the air in the chamber of the wing so you've got decent airflow to the main slot gap. It's very elegantly done and heralds a whole new family of rear wings that are made possible by the F-duct - until the concept is outlawed by changes to the regulations next year!

Renault is probably the first team to do it well. Mercedes has done something similar, but not quite as well. The theory is the same, but it hasn't exploited the concept as well.

Renault has done a lot of very good work aerodynamically recently, and the rear wing is another example of how good a grasp the team has of the airflow. For the first time in a while, Renault is trend-setting.

McLaren has struggled since it introduced the exhaust-blown diffuser package in Friday practice at Silverstone, an upgrade that some thought would allow it to overhaul Red Bull. To adapt your car to include this concept when you have designed it around a conventional diffuser is not an easy task. Unless you introduce a whole new diffuser package, and I haven't seen that on many of the cars, there's a danger that you will overwork the diffuser, which will give you little benefit.

To adapt your exhaust mid-season to work with your diffuser and to get it to work consistently with the throttle open and closed is difficult.

I also don't believe that there's as much performance to be had in the diffuser working better as there is in filling up the void behind the rear tyre, which is where you would normally be channelling the air. That will reduce the drag of the car and also help the diffuser work better. If you change your exhaust position and expect the diffuser and the whole package to work better you are probably being optimistic - that's why we are seeing people taking packages on and off like this. Ferrari took a while to achieve this, and seems to be doing well with it, but I believe that the front wing is playing a bigger part in this improvement in performance .

There is an intrinsic advantage in getting the exhaust gases out lower, because if they are coming out higher they will interfere with the beam wing and the main part of the rear wing. There are some negatives that you reduce by lowering the exhaust outlets, but there aren't that many positives to be had!

There was talk that McLaren was expecting to get something like seven-tenths of a second a lap out of the diffuser, but to talk about that kind of increase is akin to Zimbabwean inflation! You just can't find that kind of gain - just look at the comparison of last year's lap times to this year's. To change an exhaust and expect that kind of gain is too optimistic. 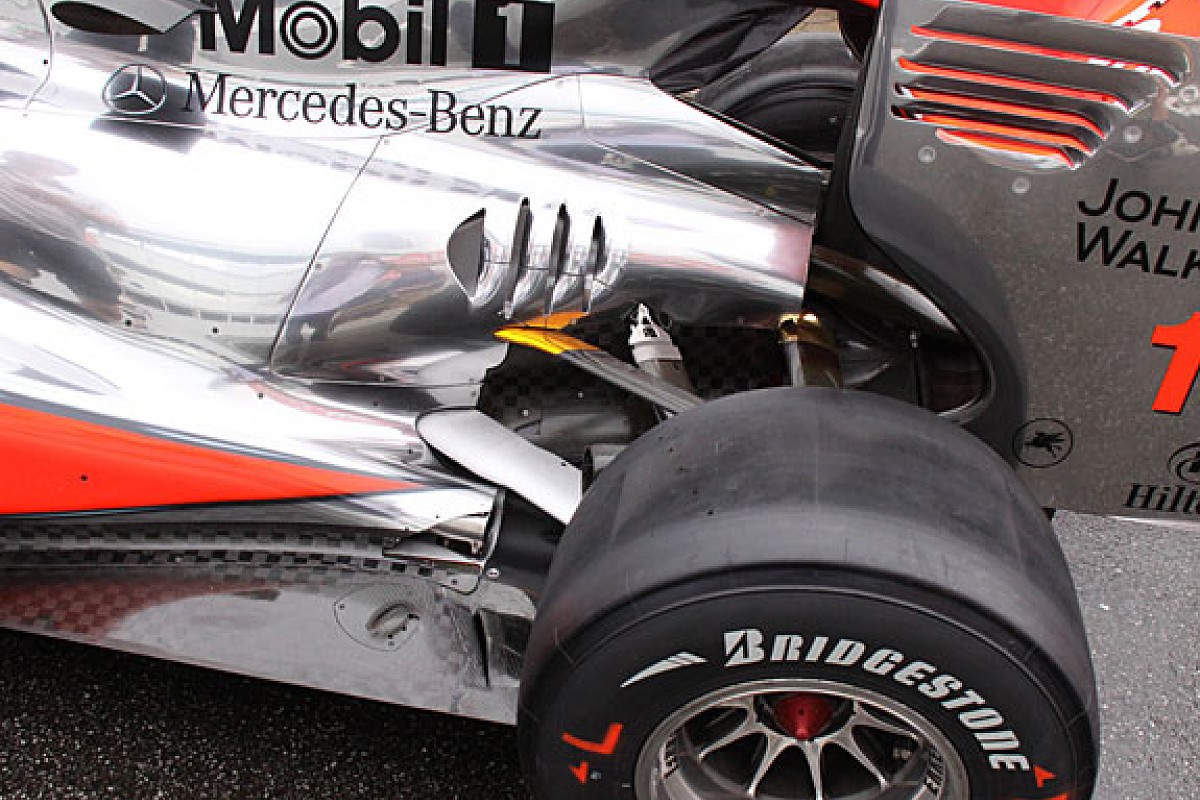 As to whether it has set McLaren back, you have to bear in mind that anything you do sets you back. Time devoted to a certain concept, whether it's in the design phase, the engineering phase, the manufacturing phase or the track-running phase takes up resources and it has to produce a benefit. McLaren admits that it has been a struggle
to get the best out of this package, and there could still be more to come.

I don't think that any team has been caused any problems by introducing the exhaust-blown diffuser, even though it seems that, in McLaren's case, the on-track benefit hasn't matched the windtunnel benefit. The key is not just putting a package on the car, it's about understanding it. Ferrari seems to have got to grips with it better, perhaps through a combination of more realistic expectations and better simulation.

The fact is that McLaren appears to be going backwards, and needs to react soon to keep its championship hopes alive.