While we await the introduction of the mid-season upgrade packages from a host of teams - including Ferrari in Valencia and McLaren in Silverstone - a lot of work was still required for the Canadian Grand Prix.

The event in Montreal puts pretty unique demands on the cars. Teams run with less downforce than at other tracks because there are only low-speed corners, and a big premium is put on aerodynamically efficient cars.

The biggest challenge though is the brakes - and it is now probably one of the toughest tracks of the year in this area. The reason it is so hard is that it has more high speed stops than other tracks - where you are coming down from maximum speed to a very slow corner quite often.

Because Canada is so hard on brakes, teams are usually pretty prepared in that area - adding extra cooling ducts for the callipers and some opting for different brake pad material that allows them to run at elevated temperatures without the wear problems associated with the normal materials.

There is often a straight trade-off when it comes to choosing brake disc and pad material for a race like Canada. You can have a soft material that gives you a lot of feeling at low temperature but has a high wear rate when it gets hot; or you can have a harder material that doesn't give you such a good feeling at low temperatures but has a better wear rate.

In the McLaren picture you can see the team has put a bit of tape across the duct, which shows the duct they chose to run is more than capable of keeping the brakes cool.

More interestingly, what you can see the team has done below the duct is to introduce a turning vane at the lower edge of the brake package. This is clearly a downforce producing device, which helps deviate airflow on the upright and channel it to an area where it can be put to better use.

McLaren has talked in recent days about optimising every area of the car, and this is clearly an example of a small that will have required a great deal of effort and investment to come up with.

Introducing this part will change the airflow to the rest of the car, so could have an impact further downstream - which in turn will require examination and then perhaps lead to even more detailed work of other components. But that is what it is like in this currently intense development fight between the top teams these days.

Red Bull Racing appears to have played things a bit on the cautious side in Canada with its brake preparations, although you could hardly blame it considering the problems it has had in this area this season.

The bottom duct is clearly aimed at keeping the calliper cool, and it is what I would label a 'rugged prototype'. It appears to have been made very quickly to get on the car. But still, the exact shape and dimensions will have been carefully thought about - as the days of barn door brake ducts have long gone.

BMW Sauber also ran the double duct option in Canada - and you can see it ran an aerodynamic turning vane device at the rear of its front brakes.

One of the themes of the 2010 season has been the rate of development at Renault. The team has shown with the numerous tweaks made to the R30 that it not only understands how the car works, but also has a really good handle on 3D-concept airflow around the front-wing endplates and wing flaps. 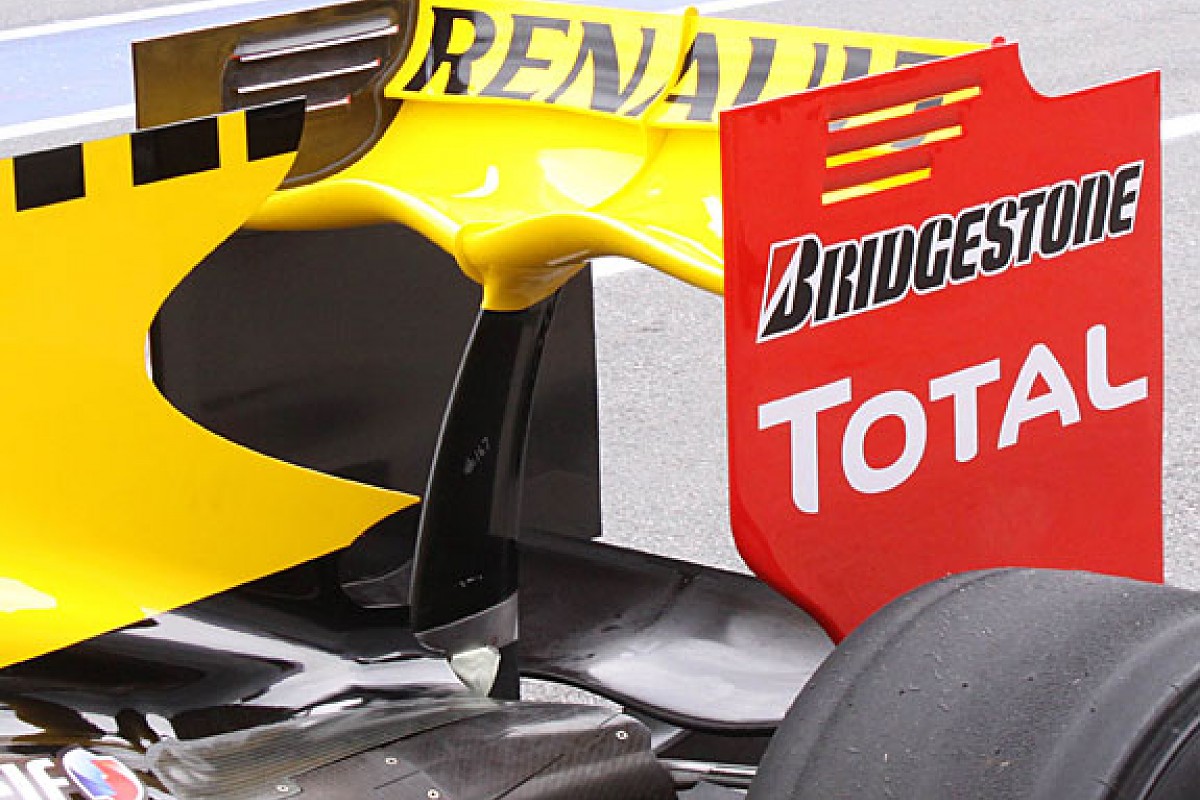 Total proof of this came in Canada when the team introduced a pretty advanced rear wing design - which showed how well-grounded the team's thinking with airflow is.

With any flow regime on the rear wing of an F1 car, you do not get a linear flow across the whole width of the wing. It is not hard to work out that some of the airflow will hit the rear wing straight on, but on other parts the air will be coming at it at an angle. One area where this happens is around the engine cover - where the airflow comes around the side of the cover and shoots downhill, at an angle of between 10 -15 degrees.

The twisted shape of the main plane ensures that the airflow is hitting the leading edge of the wing to give a more or less equal lateral loading. This gives maximum efficiency across its width. Towards the centre it has a steeper angle of attack, and this is really just because of the airflow regime around the mounting system. The wing then reduces in camber as the airflow comes down, and around the engine cover, and then increases again at the outer edges where the airflow is more horizontal.

Renault's strong airflow understanding is mirrored by the developments it has made to its front wing too. This picture shows both the new version used in Canada at the top and the older version at the bottom - which does not feature the upper front wing element.

With any two or three-piece front wing assembly, any change in angle, plus or minus, that you put on the wing is going to have an impact on the airflow over the rest of the car - so there are numerous knock-on effects if you try to change the downforce level by increasing or decreasing the angle of the main wing flaps.

By putting the upper front wing element on, you are able to create more downforce while being able to leave the other wing assembly alone.

Renault was able to get rid of rear downforce in Canada and hence drag with the smaller rear wing and was then able to reduce the front downforce to give the required balance by removing the upper forward element. This allowed it to keep the main planes at a stable angle. This ensured a better flow regime to the rest of the car which gave much better overall aerodynamic consistency. 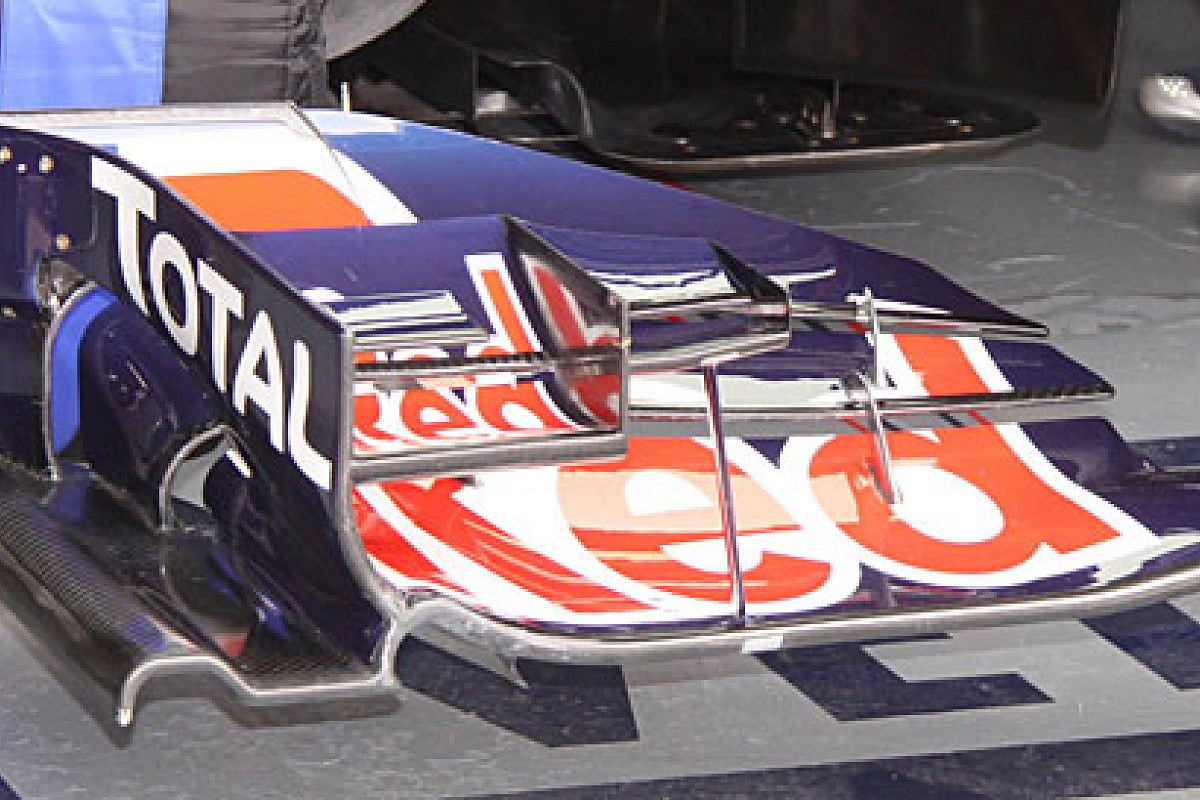 At one time Red Bull Racing did lead the way in terms of front-wing understanding, but it appears that it has now been caught up. It was first with a trend-setting multi-wing, multi-element component and maybe it realised it was now time to do a revision of it.

Its Canada wing featured a 3D slot at the end of the flap in the front wing endplate. The aim of this was to get air through there to stop airflow separation where the flaps meet the endplate. Although such separation could be caused by a very small percentage of the wing, when it happens it would affect a much larger area so if you can reduce or remove that separation you will have a more efficient and consistent front wing package. 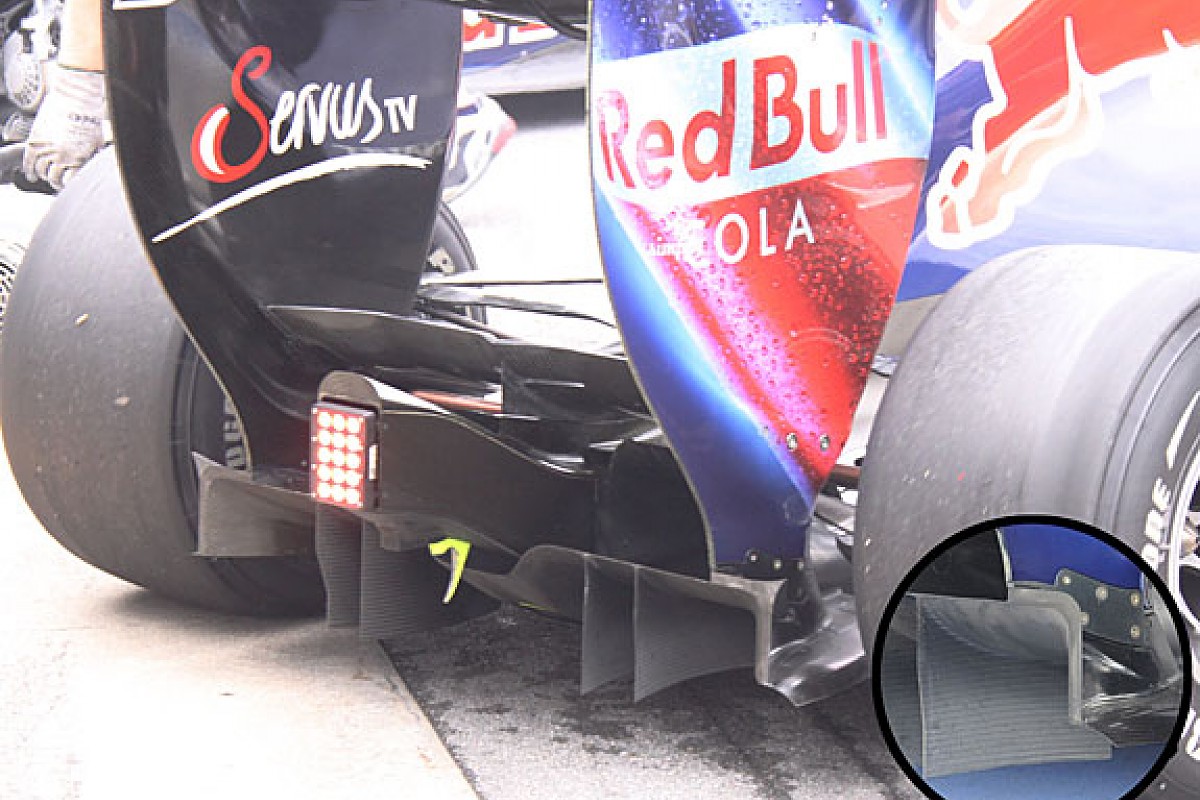 Most teams have now done the major development work on their double diffusers, but a lot of work is still going on in circuit specific fine-tuning for extra performance.

Red Bull Racing showed how the focus on improving the diffuser designs extends to the smallest details when it tweaked a Gurney Flap on the top corner in Canada.

The Canada version (main picture) features an added pointed section, compared to the rounded version that had been used up until now (inset).

Looking at the vertical outer wall, this is the area where the exhausts are fed into the inner area to re-energise the flow on the very curved inner vertical wall .

The outer vertical wall of the diffuser turns out very abruptly to try and communicate with the low pressure area behind the rear tyres. Often, by the time the air reaches this section of the car, it can be quite lazy, having been beaten up as it passes over the rest of the car. It may then not want to stay attached to the inner vertical surface and turn the corner into that low pressure area behind the tyre.

This is why Red Bull uses the exhaust outlets to assist in creating some reasonable energy airflow to help the lazy air get there quickly. The idea of this extra pointed gurney flap will be to set up a defined vortex position and connect this lazy airflow to the low pressure area behind the rear tyre.

This in turn keeps the airflow attached on the inner wall of the diffuser and get the diffuser and the low pressure area behind the tyre working together. The result will be a more consistent downforce.

McLaren also tweaked some details on its diffuser in Canada - rounding out some of the sharp edges on the inside of the tunnels.

If you have a straight 90-degree connection betwen the underfloor surface and the vertical splitters, the airspeed on the vertical wall will often find itself at a different speed to that which is flowing along the horizontal wall. This can create a vortex - which can lead to a small area of airflow separation and cause you a fair amount of grief.

By putting a radius between the vertical and horizontal sections you will be dissipating these speed differences. While this will still create a vortex, it will allow the air somewhere to rotate and you can control it much better - therefore providing more consistent airflow through the diffuser.

In F1, as Canada showed, it is often the details that count.

On the technical front, the Canadian Grand Prix was not just important for what happened on track - because there were some interesting developments off it as well.

F1's think-tank, the Technical Working Group, met in Montreal before the race and voted through a number of changes to the cars that will have a big help on overtaking for next season.

While a lot of interest has surrounded the return of KERS, I don't think that that is going to have as big an impact on improving the racing as the moveable rear wing.

Although there are still a few details to get sorted with regards the rear wing, the basic concept is that for next year the wings will have a rear slot gap that is normally 10mm wide - but it will be able to open up to a maximum of 50mm if a driver pushes a button on the straight.

Opening up the slot gap will make the rear wing produce both less downforce and less drag. If, for example, you had 1000kg of downforce with 333kg of drag, a three-to-one ratio with a 10mm gap, you would probably get 500kg of downforce and 166kg of drag when the gap opens up to 50mm - again a three-to-one ratio. The objective is to achieve less drag, but unfortunately with that comes less downforce.

The idea is that a driver can only use the wing if he has been very close to a rival for a whole sector of the lap - and a light in the cockpit will alert him to the fact that he can use the wing. What is significant is that the driver in front, who is defending his position, will not have access to the same kind of drag reduction.

This moveable rear wing, along with KERS, should be a big boost to the spectacle - and it is good that the teams have finally realised that the adjustable front wing has been a flop. And although there will be a bit of a cost for the teams in producing a new family of rear wings, it should actually be a reasonably cost-effective way of improving the racing.