On the grid were 66 Dallara P217 LMP2 cars split into two heat races, with the top 15 from each then making it into a final Bonus Race. Each car has two designated drivers, one professional racing Esports and one from real-world motorsport, with a driver swap required in each race.

A unique feature of the VCO ProSIM SERIES is fans voting for each track just ahead of the evening’s action, and so it was Road America that was the chosen venue this time around.

Enzo Bonito in the #70 Team Redline entry would lead the first heat race away from pole position, ahead of the #20 Coanda Simsport car driven by Mitchell deJong. Round 1 Bonus Race winner Chris Lulham in the #11 Team Redline would line up in fifth.

The race start was frenetic, with Bonito and deJong rubbing cars through the first corner, while further back IndyCar and NASCAR Xfinity Series driver Sage Karam skirted the gravel trap, but unfortunately hit the tyre barrier. 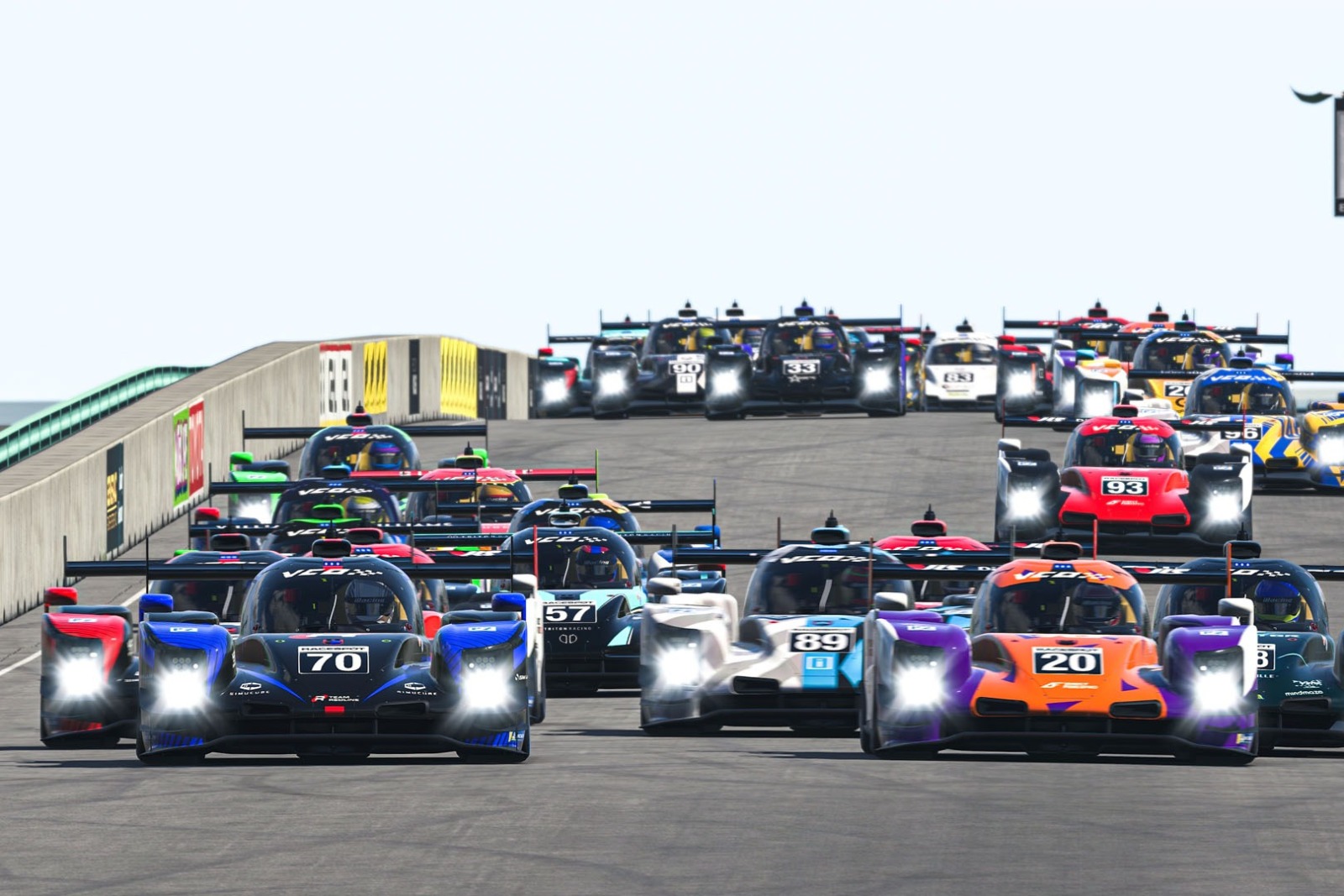 Further round the opening lap, Lulham has made his way up to second, passing deJong on the inside of Turn 5. This was followed by a lurid slide from deJong through Turn 7, rescued through Hurry Downs – but several positions were lost.

Meanwhile, Corvette Racing driver Tommy Milner in the #83 Private Label Team Hype car suffered from a ginormous shunt towards the end of the first lap.

As the race progressed, all eyes were on the battle for fourth between the #89 BS+COMPETITION entry driven by Phillippe Denes, a recovering deJong and a resurgent Ayhancan Guven for Team VRS.

After several moves, the battle culminated in Guven taking two positions in one move at Canada Corner, as deJong received a small tap from Denes, sending them both wide. However, deJong would fight back once more, snatching fourth again on the very next lap.

With just under nine minutes on the clock, Lulham pitted from second to switch over to Maximilian Benecke, while race leader Bonito waited one additional lap before handing over to Gianni Vecchio. The net result was a significant undercut by Benecke to take the lead.

R8G Esports was in third position at this point, with Vlad Khimichev at the wheel, but he sadly went off the circuit at Canada Corner after contact with Vecchio – wrecking any chance of a podium finish. 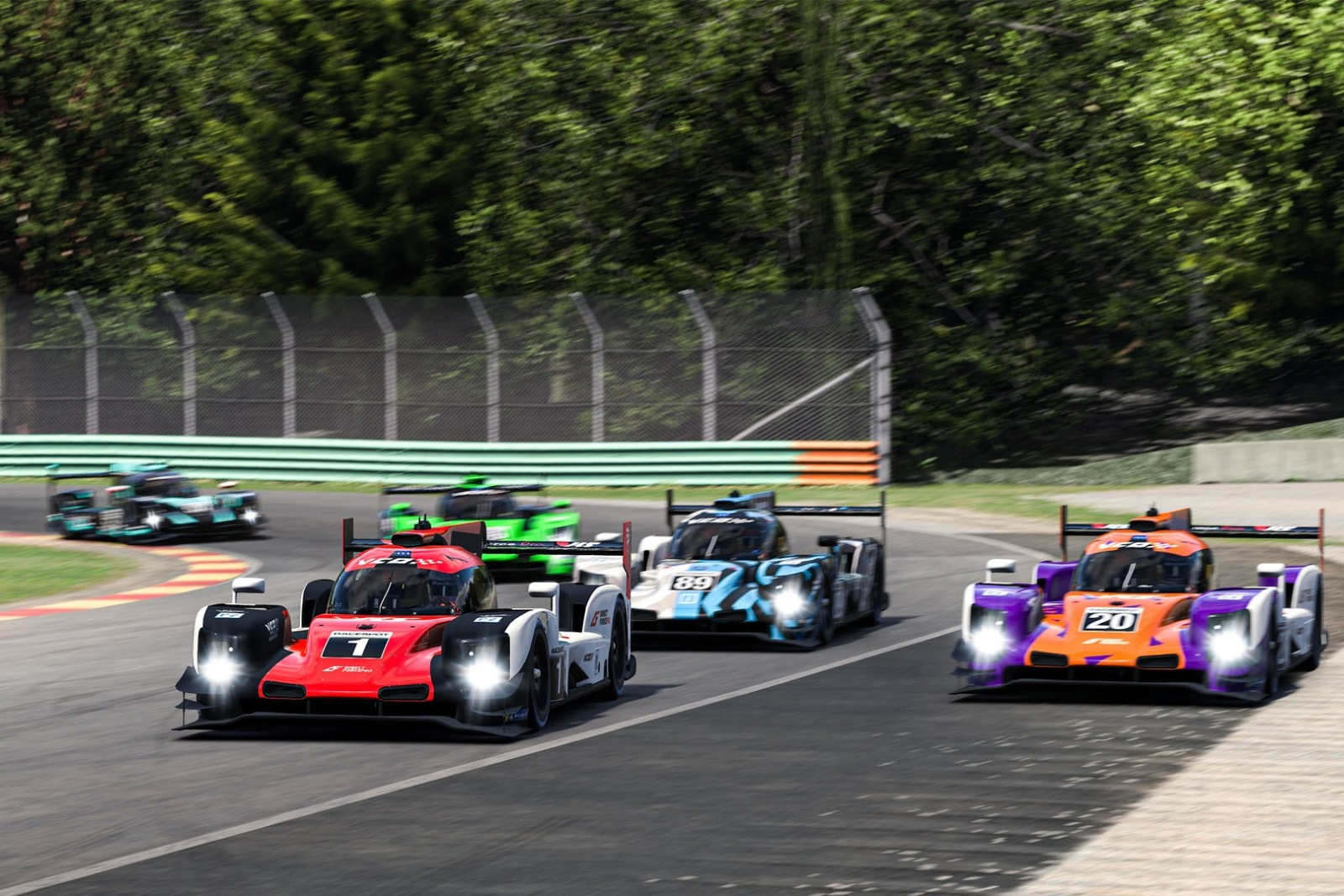 Vecchio was defending heavily to try and keep hold of second place. He went three-wide into Canada Corner once more on the final lap, with Charlie Collins, now in the #20, on his left and Joshua Rogers in #1 on his right. There wasn’t enough space for all three, with Collins ending up backwards in the gravel and Rogers moving up a position.

In the end, it was a crushing performance by Benecke and Lulham to win, ahead of Rogers and Guven and Vecchio and Bonito.

After the stress of the first heat, 2021 Porsche Supercup and Porsche Carrera Cup Deutschland race winner Laurin Heinrich was on pole position in the #92 car of BS+COMPETITION ahead of Alessandro de Tulio in the #87 R8G Esports vehicle. 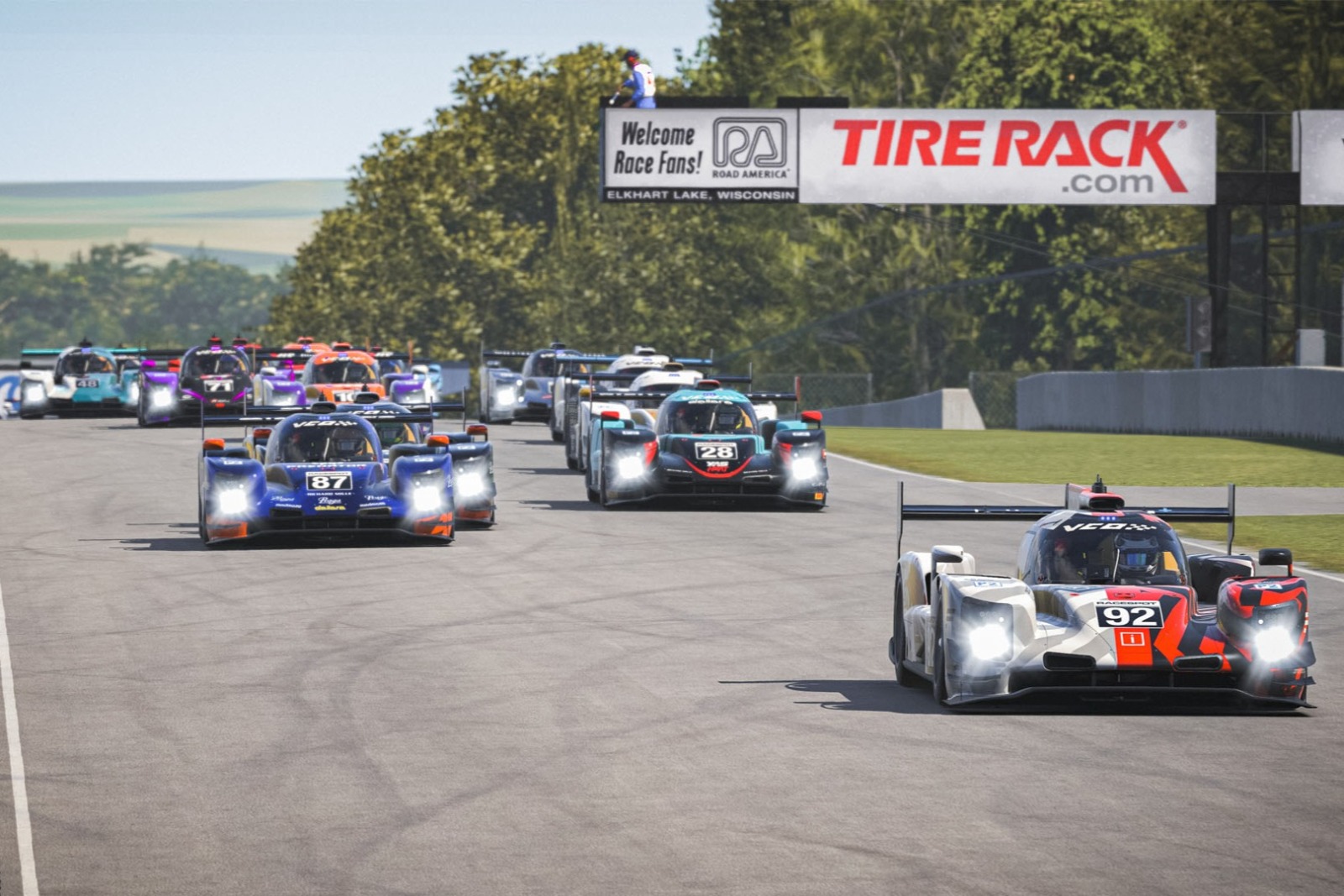 Drama hit the field immediately at Turn 1 as current Super TC2000 championship leader Agustín Canapino ended up spearing backwards towards the wall and falling to the back of the field. DTM Trophy podium-finisher Moritz Lohner was deemed at fault for the lap one incident, resulting in a drivethrough penalty, and then later tapped the rear of Coanda Simsport team-mate Dylan Pereira.

At the head of the field, Heinrich still led Tulio, with Nicolas Varrone in a close third. As the two R8G Esports cars tried to pressure Heinrich, Varrone moved past Tulio, but this allowed Heinrich to stretch a gap.

Varrone visited the pits to hand across to Przemyslaw Lemanek at just under the nine-minutes left mark. Both Heinrich and Tulio stayed out one further lap, but the positions remained the same once everyone had switched drivers – with Kay Kaschube now in the leading #92. 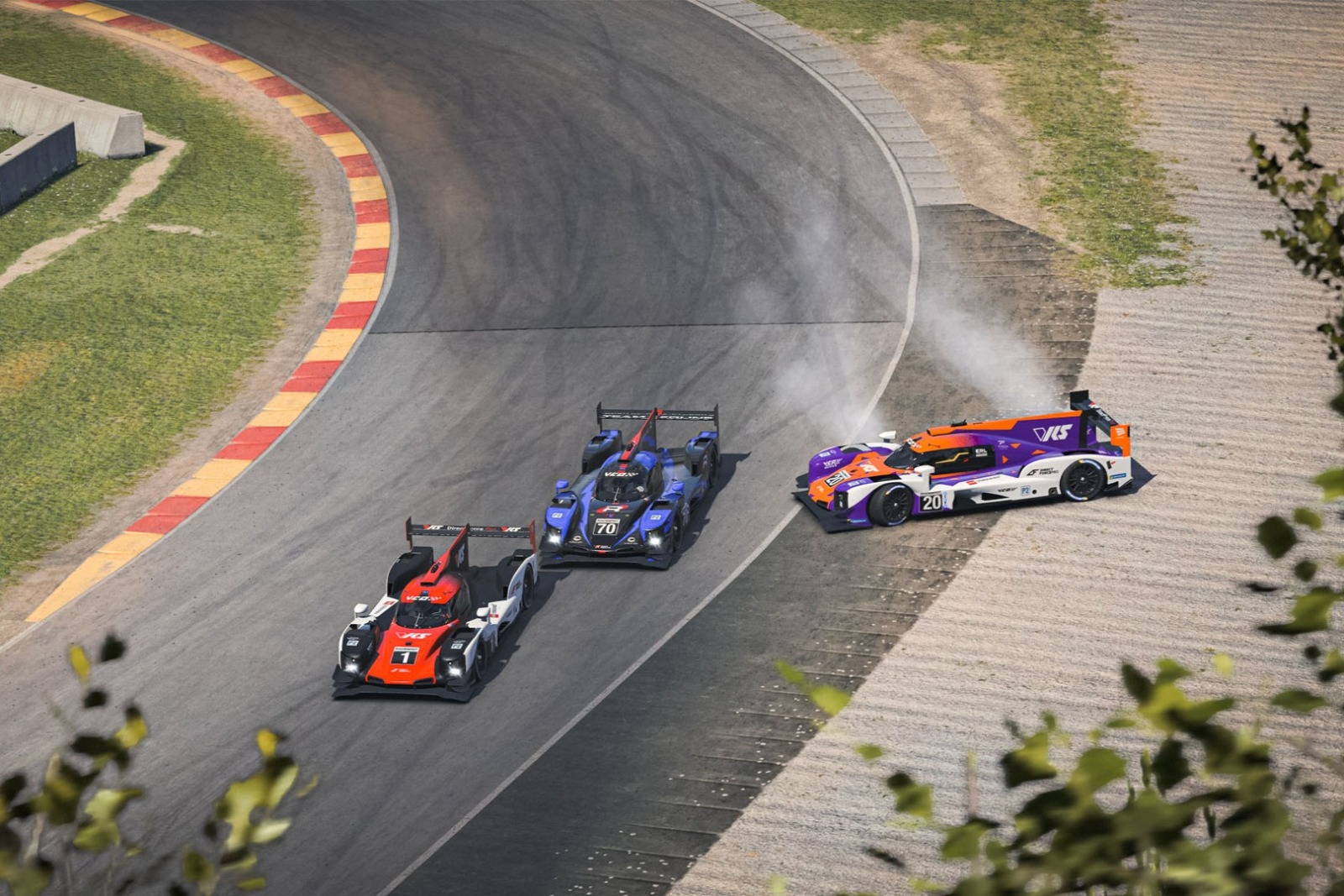 Thibault Cazaubon was now in the third-placed R8G Esports machine but was overtaken for the final podium spot by Apex Racing team’s Jamie Fluke in the dying moments of the heat.

In the end, it was the Kaschube and Heinrich combination that held on for the win, ahead of Varrone and Lemanek in second, with Taylor Barnard and Fluke in third. Across the line, the #32 RLR Abruzzi eSports entry was tipped into an unceremonious spin by the #47 MSI eSports car.

Onto the longer, 30-minute, Bonus Race to end this round’s action – where most of the prize fund cash is distributed.

Coanda’ Simsport’s Collins started on pole position, joined on the front row by Apex Racing’s Fluke, ahead of reigning champion Rogers in third and Heat 1 winner Benecke in fourth.

The Heat 2 and Hockenheim Bonus Race winners, #92 BS+Competition, were all the way down in 15th. 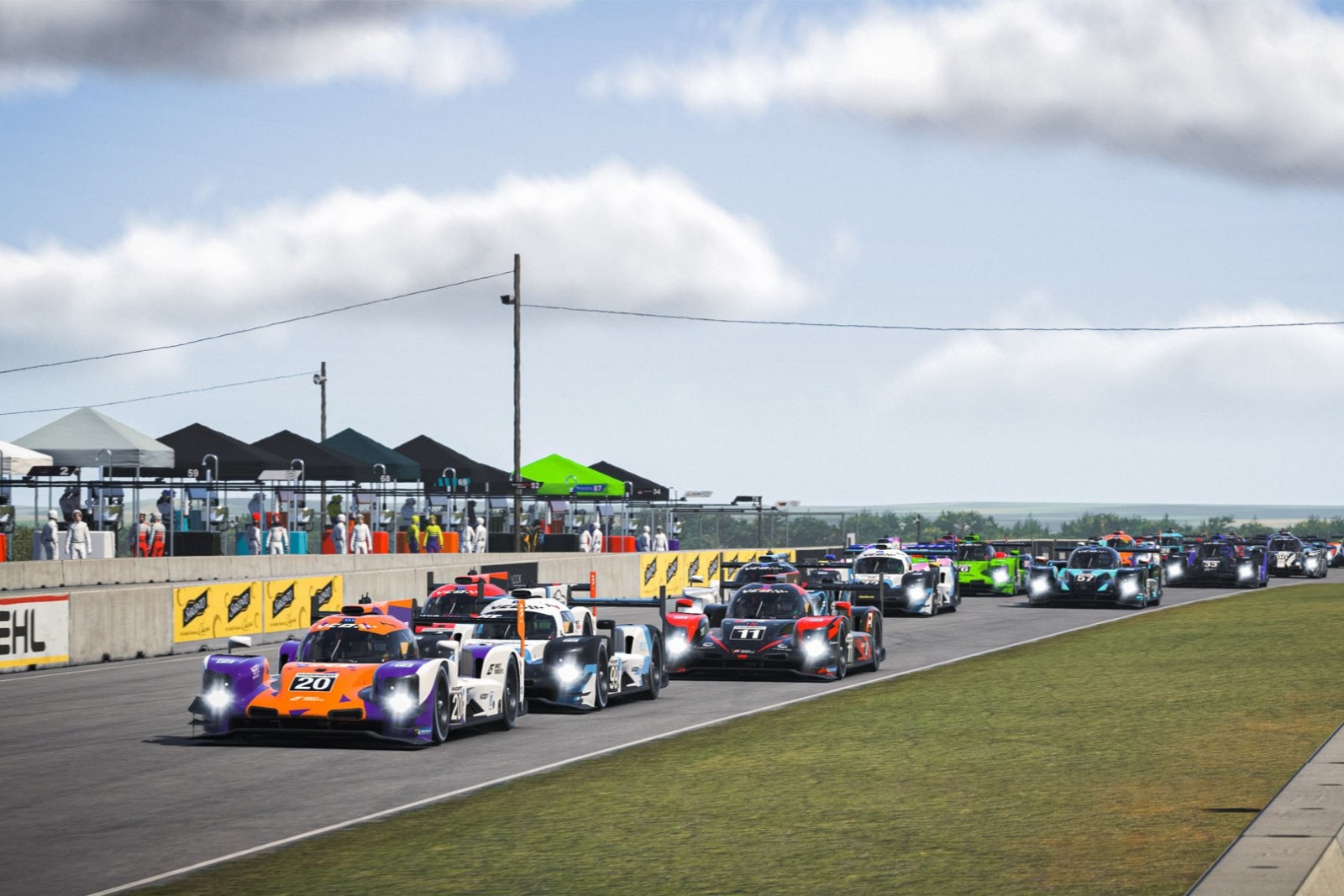 The first incident happened behind the pace car before the green flag, as Louis Nahser was punted into the barriers by #70 driver Vecchio in what was assumed was a technical error.

When the race got underway, the top three on the grid were nose-to-tail all through the opening laps, with Collins not breaking away, but Fluke preoccupied with Rogers close behind. As they battled for the first seven minutes, Benecke closed in to make it a four-way scrap.

With nearly 10 minutes complete, Rogers applied pressure to Fluke, making a clean overtake into Canada Corner – now becoming the default passing opportunity – for second. A few minutes later, Benecke was up to third, getting by at Turn 6.

As the race dipped under the halfway mark, Rogers was charging, making up the deficit to the race-leading Collins. The leader made their mandatory pitstop with just over 13 minutes on the clock remaining, so Rogers stayed out for one more lap. 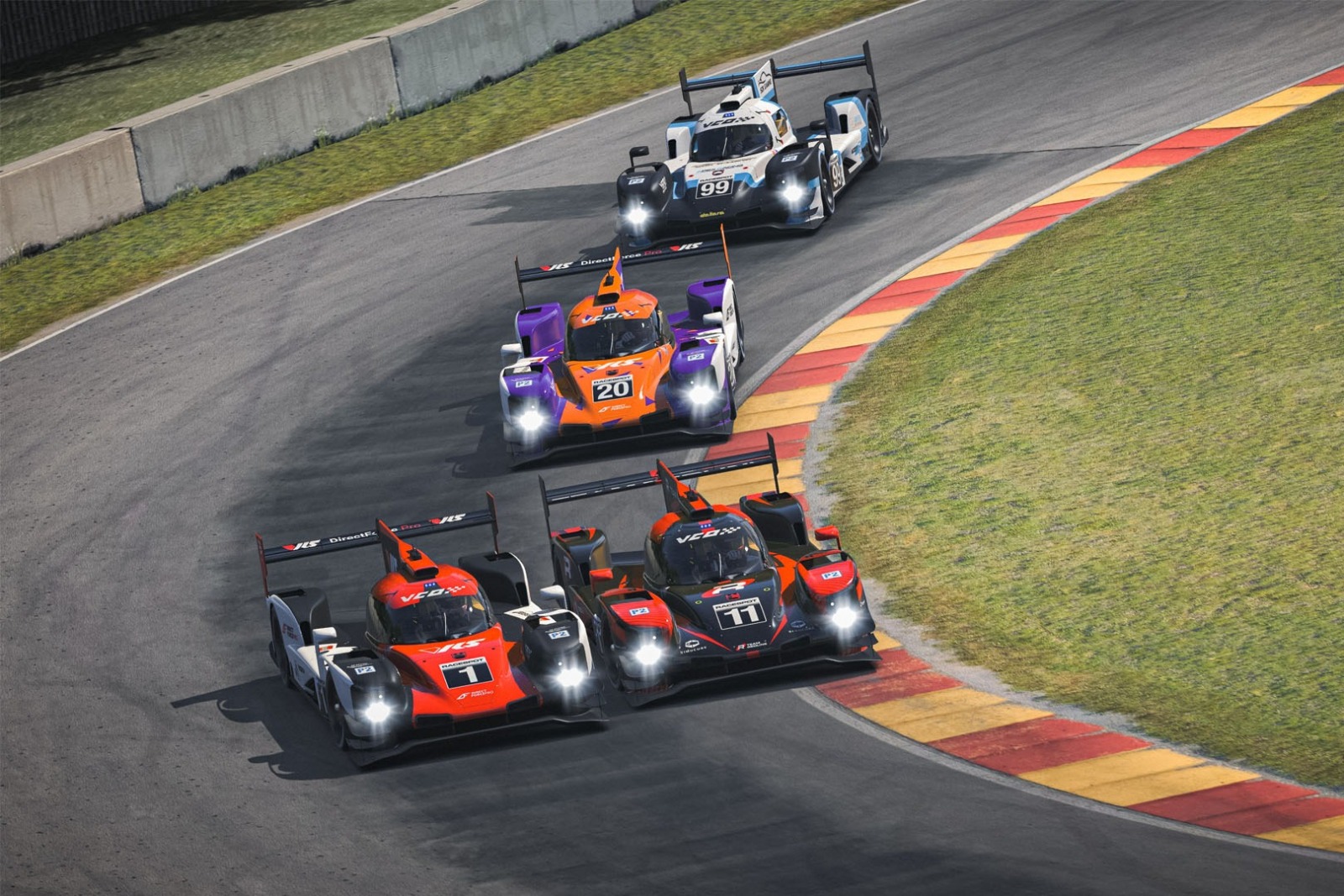 Once the strategies had played out, Rogers’ approach of staying out a lap longer had worked, with Guven now at the wheel and in the lead, ahead of Lulham in second taking over from Benecke, deJong switching for Collins in third and Barnard replacing Fluke in fourth.

With eight minutes left, and four cars vying for the lead, Guven started defending. Lulham tried to make the move stick at Turn 6 but ultimately lost out to deJong. With all this battling taking place, fifth place had also joined the train, Phillippe Denes in the #89 BS+COMPETITION ENTRY right on its tail.

As the clock ticked down, Guven put on a staunch defence, covering the inside line whenever an aggressor zoomed into view. On the last lap, deJong tried at Turn 1 and Turn 5, but was met with a face full of a Team VRS rear wing – losing second to Lulham after his second failed attempt. 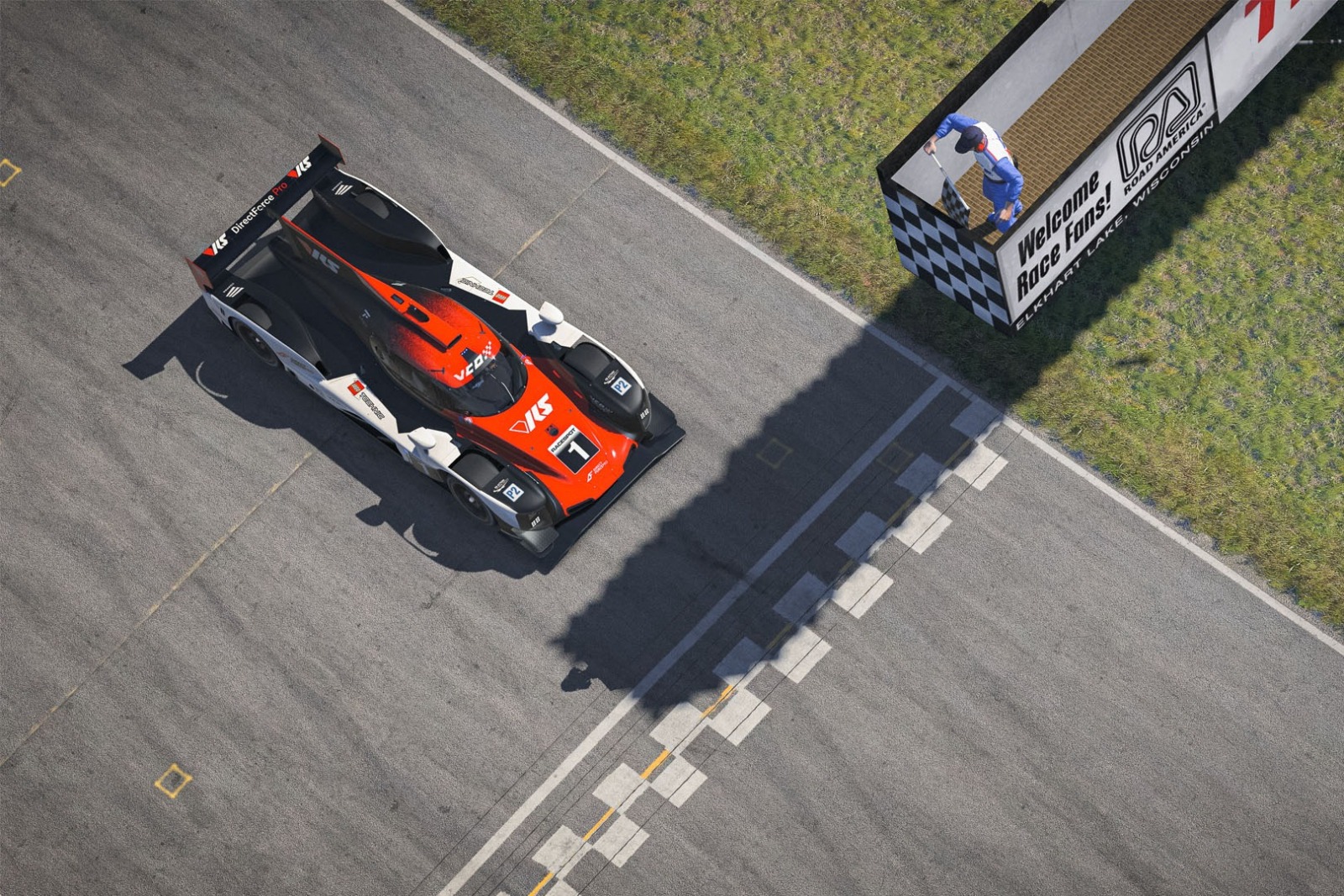 In the end, it was a masterclass in covering your position by Guven to give him, Rogers and Team VRS their race victory of the year.

The final round of the VCO ProSim Series is on the 23rd November 2021 where the championship shall be decided.