It doesn’t matter what flavour of sim racing you follow; the final three rounds of a championship is the home stretch. For Mortiz Lohner, that means preserving his healthy advantage in the standings of 53 points for just a few more rounds to be a triple champion of the ADAC GT Masters Esports Championship.

Round 5 featured EuroSpeedway Lausitz as the venue of combat this month – a demanding circuit where focus is required at all times. Sparks were flying off the undersides of the cars and many more were expected in all three races of the evening, be they GT3 or GT4.

Florian Hasse had enjoyed a decent 2021 season with a win back at the Red Bull Ring a highlight. The argument could be made that his consistency rivalled that of Lohner just with smaller points scores and the two were almost deadlocked in qualifying during this round.

One thousandth separated the two Dorr Esports cars with Florian snatching pole by the finest of margins. The conversely inconsistent Nikodem Wisniewski would line up third whilst Isaac Price would be one to look out for in fourth.

Second in the championship but seventh for the Sprint Race, Jack Keithley surely wouldn’t have been happy. Neither would close rivals Jakub Bzezinski or Kevin Siggy, as both drivers were even lower. 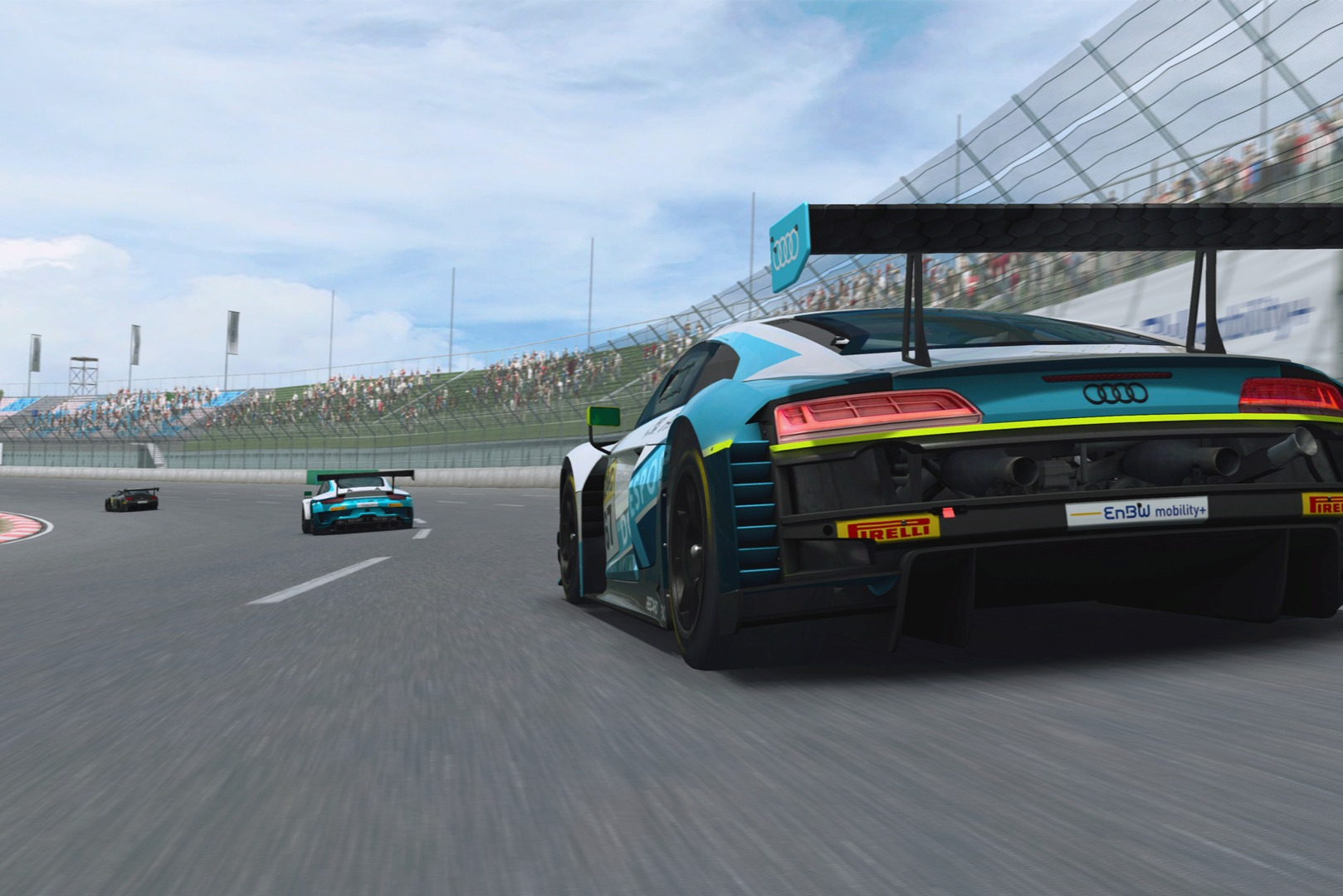 It wouldn’t have been hard to imagine a giant grin on Price’s face after the lap one had concluded. First, a free position as Wisniewski was unable to take the start due to a technical issue. Second, a sensational overtake around the outside of Turn 1 on the entire front row to take the lead. Third, the second Williams of Keithley found strife through Turns 3 and 4, spinning out of the top 20.

ADAC GT Masters Esports 2021 Round 5 Sprint Race Bentley Spin Docile was the word to describe the following five minutes before an overtake emerged amongst the frontrunners. Lohner had been content running behind his stablemate but with Price starting to extend the lead gap, a switch had to happen. So it did with 13 minutes left.

Despite having the lion’s share of the race left to run, however, the German was simply unable to put a dent into Price’s advantage and the Brit would make his first win of the season look effortless. Bence Banki would secure reverse grid pole position after an 18-minute defensive drive against an exasperated Siggy. 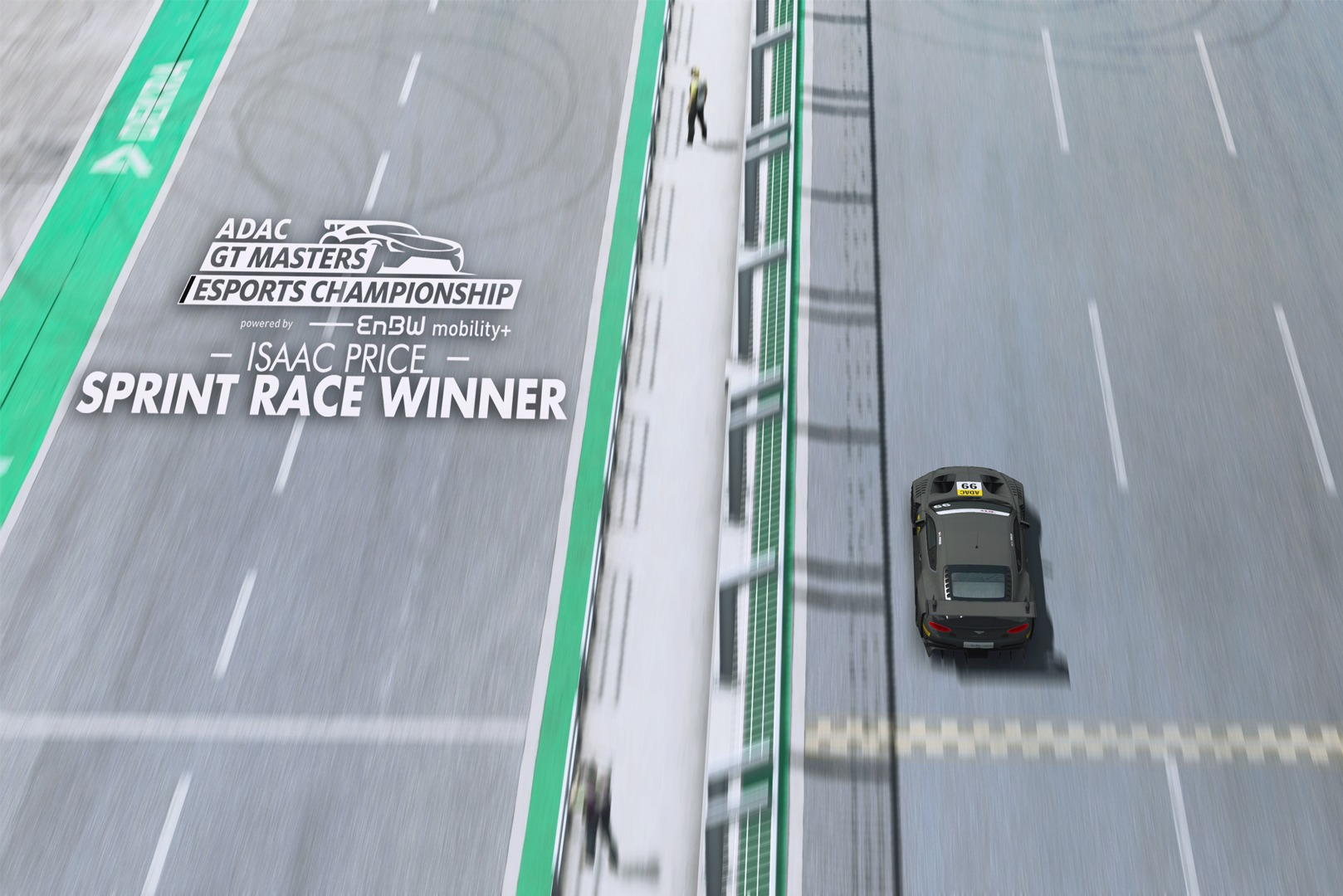 This week we were delighted to see exhaust pipe connoisseur and resident Traxion.GG Scotsman John Munro return to the GT4 field. He, along with everyone else, was most likely terrified by the three-tenths Emre Cihan managed to hold over everyone in the qualifying session.

We promise you all that we’re not duplicating this section month after month, it is simply the truth. Cihan won the race from pole as yet again Adam Pinczes and Alessandro Ottaviani made up the rest of the podium.

John got 18th though and we are all very proud of him, his best result so far and after some technical dramas preventing extensive practice. 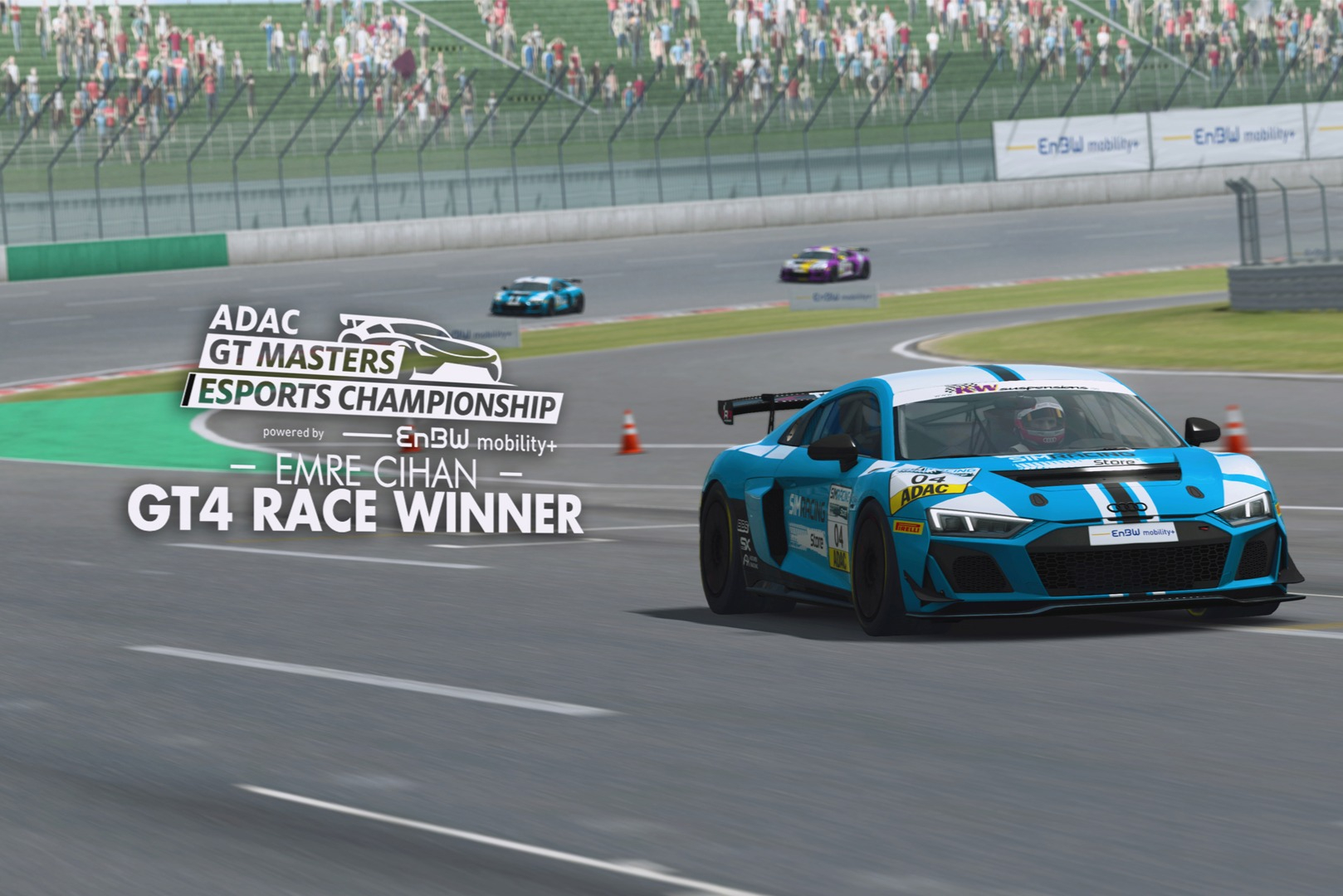 Turns 3 and 4 were once again laced with carnage as the front runners got away cleanly with the exception of Tim Jarschel lost out due to a spin. Turn 11 would see another major casualty as Jeffrey Rietveld ejected out into the gravel trap, falling from the middle of the top 10 to 18th on the road. Brzezinski had already snatched one position from Leon Rudinger and come lap two he replicated Price’s opening gambit in the Sprint to relieve Marc Gassner of second.

Speaking of, the Brit was tearing through the field picking up four places in the first three minutes. The other podium sitters were also finding strong winds with Hasse up to fifth and Lohner up a single place but struggling to pass a stubborn Leonard Krippner. He’d end up in seventh anyway but not by his own skill. Brzezinski after a storming start picked up a slow-down penalty taking away all his good work and then some. 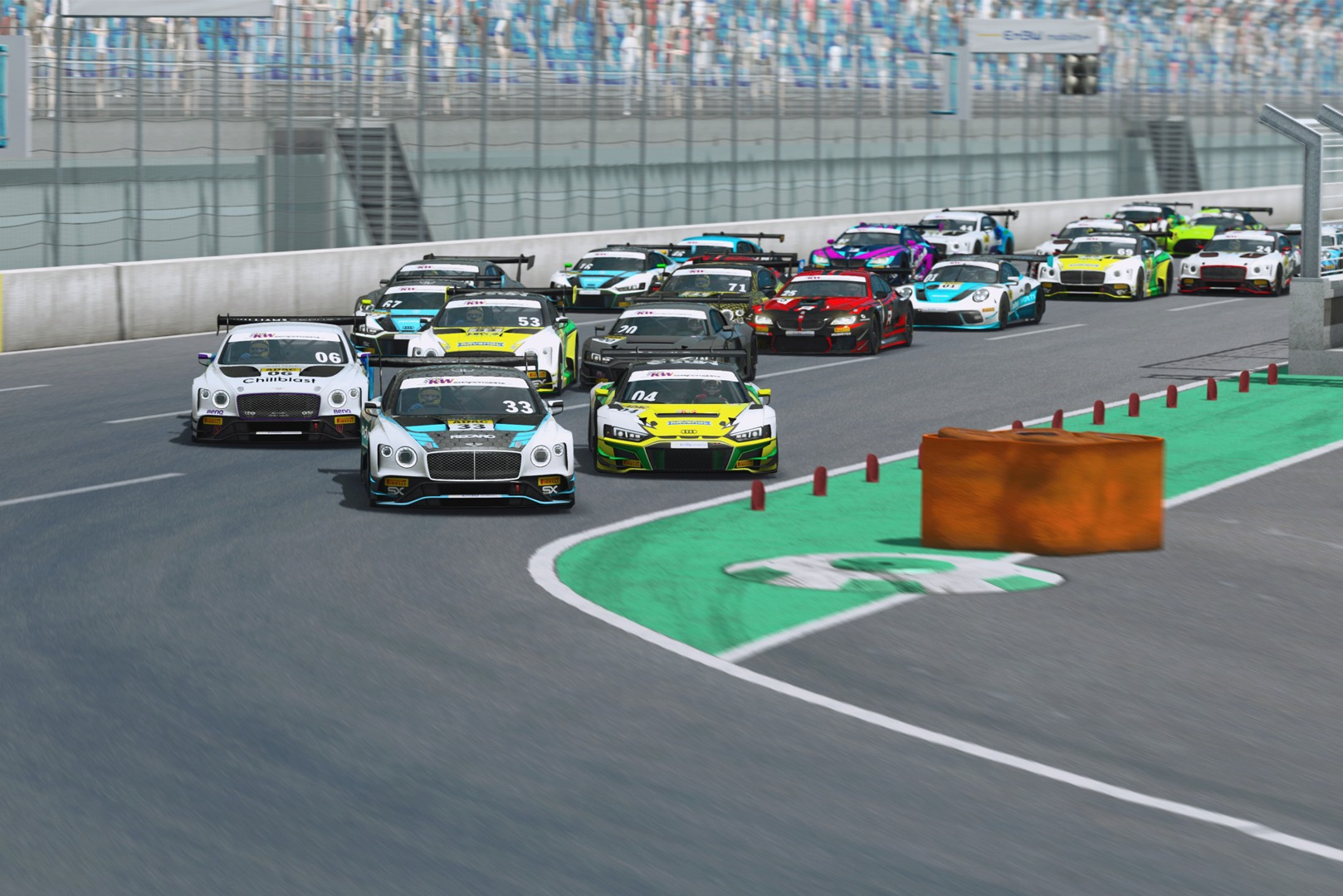 A few plucky pilots were eager to dive into the pitlane as soon as it opened. Amongst these included championship leader Lohner but more curiously Isaac Price who usually was one to stay out on track longest in the Feature Race. The two would coincidentally come out nose to tail; a testament to the virtual Dorr mechanics. The second blue and white machine paid a visit the following lap and lost out to both undercutters.

The result of this information was almost everyone who had yet to pit diving in to respond to the threat of Price’s and Lohner’s early stop insurrection. Indeed so tight was the pit exit into the field for Gassner and Rudinger that the pair were clipping into each other right until they finally separated at Turn 5. A most bizarre sight.

All front runners done and dusted, the order now ran as Banki, Price, Lohner with Gassner down to fourth. Alex Dornieden along with Siggy and Brzezinski had all chosen to stay out a little longer to wait out the seemingly inevitable loss of positions. A win for the reigning champion was on but time was of the essence with the net race leader holding a three-second buffer. Lohner seized the initiative from Price into Turn 11 and had bagged himself 20 minutes to chase crucial championship points. 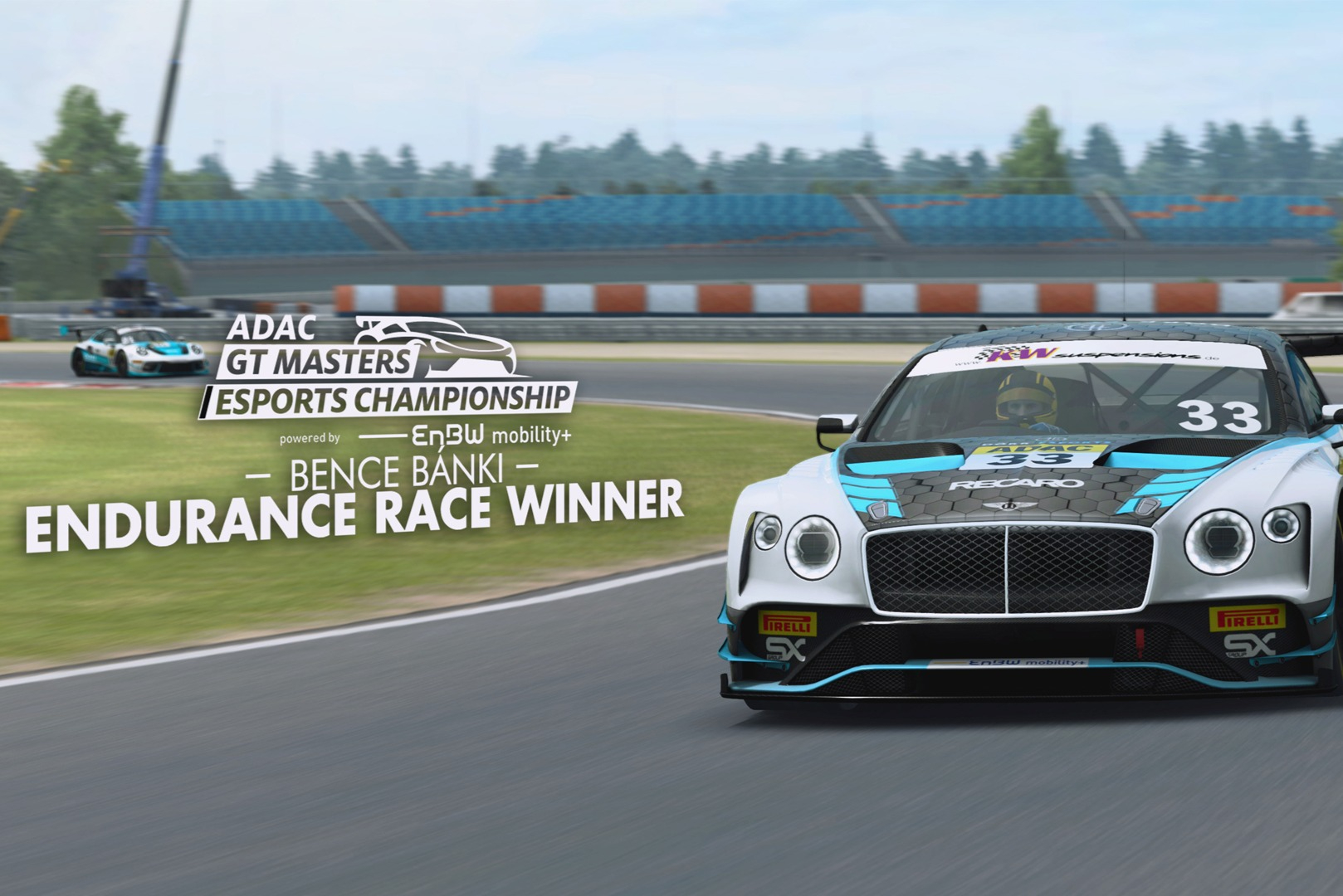 Aside from the highly entertaining battle on the edge of the top 10, the race was subdued. Music to the ears of Bence Banki who would ensure a second Dorr Esports 1-2 of the evening with Lohner and Price hitting the podium a second time in one evening.

The ADAC GT Masters Esports Championship returns on 28th September. Our German tour continues at the Sachsenring and the racing will be live on the Traxion.GG YouTube channel.