Peugeot Sport will be competing in the 24 Hours of Le Mans Virtual for the first time ever this weekend, which also marks the three-time real-world event winner's outright debut in sim racing.

One of the most garlanded motorsport brands in the world will be participating in the biggest Esports event of the year this weekend. 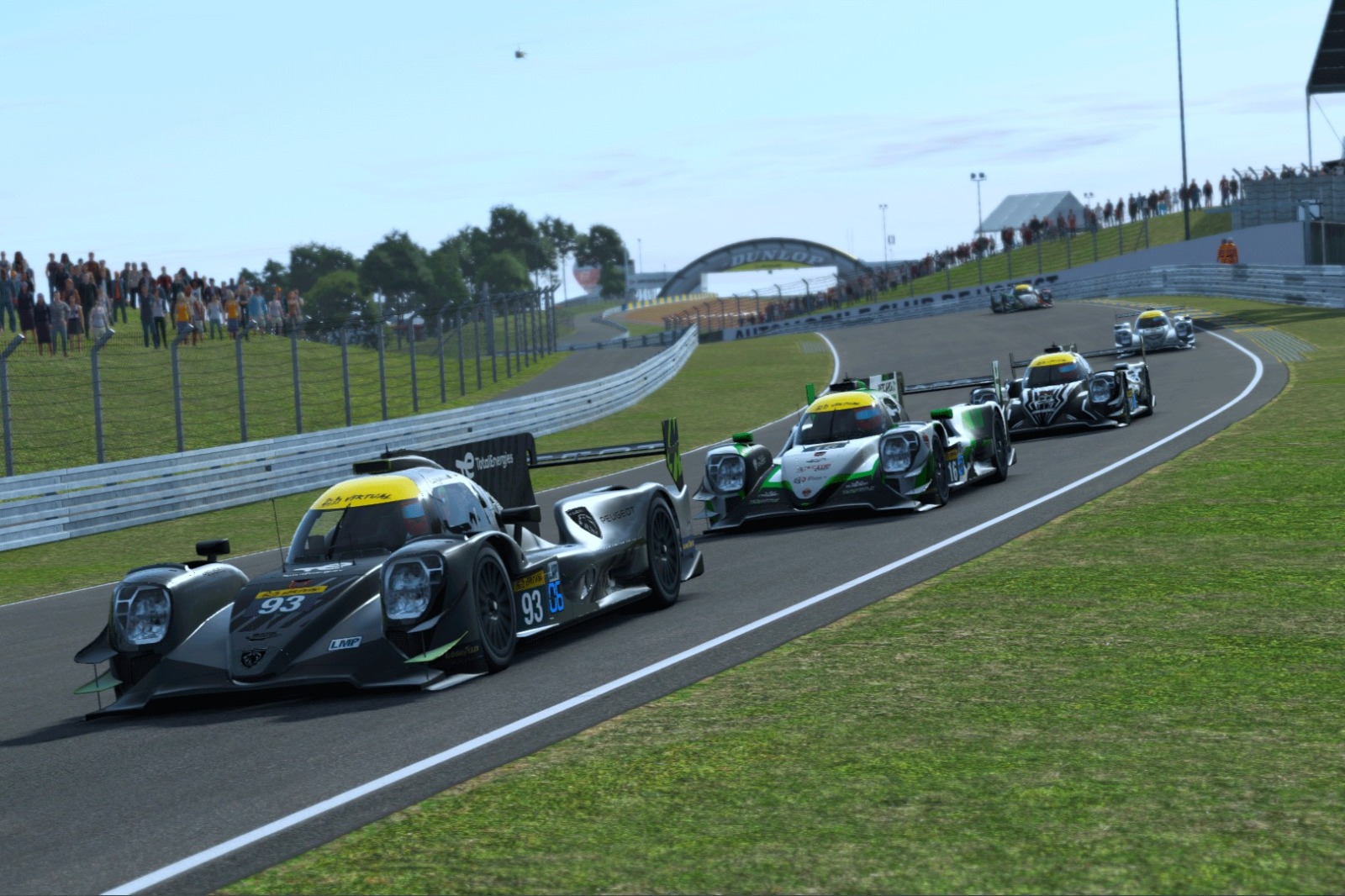 “We are really excited,” said Vincent Dussossoy, Marketing and Communications Manager for Peugeot Sport. “We can’t wait because we have been preparing for the event for the last six months. This is the first time Peugeot will enter and commit to Esports, so we wanted to do it properly with a competitive line-up.

“For Peugeot, there is a lot of expectation, but it’s a first edition for us. Everything will be new. We’re pretty happy with the set-up and the pace, so we’ll just go for it.”

Being part of the virtual world of racing has always been a dream of the Stellantis group. Of course, Peugeot is just one of the 14 brands who represent the global automaker. The decision to highlight Peugeot Sport was an easy one, considering the brand’s “core market” is aimed at the younger generation.

Dussossoy says one of the goals is to gain the attention of millennials by creating a community by competing in Esports.

“Real-world motorsport is expensive. It’s dangerous. Sometimes you have the talent, but lack the opportunity. In Esports, you can sim race worldwide and as a manufacturer, we want to be in. During the lockdown, everybody was talking about sim racing, so we had made our benchmark.” 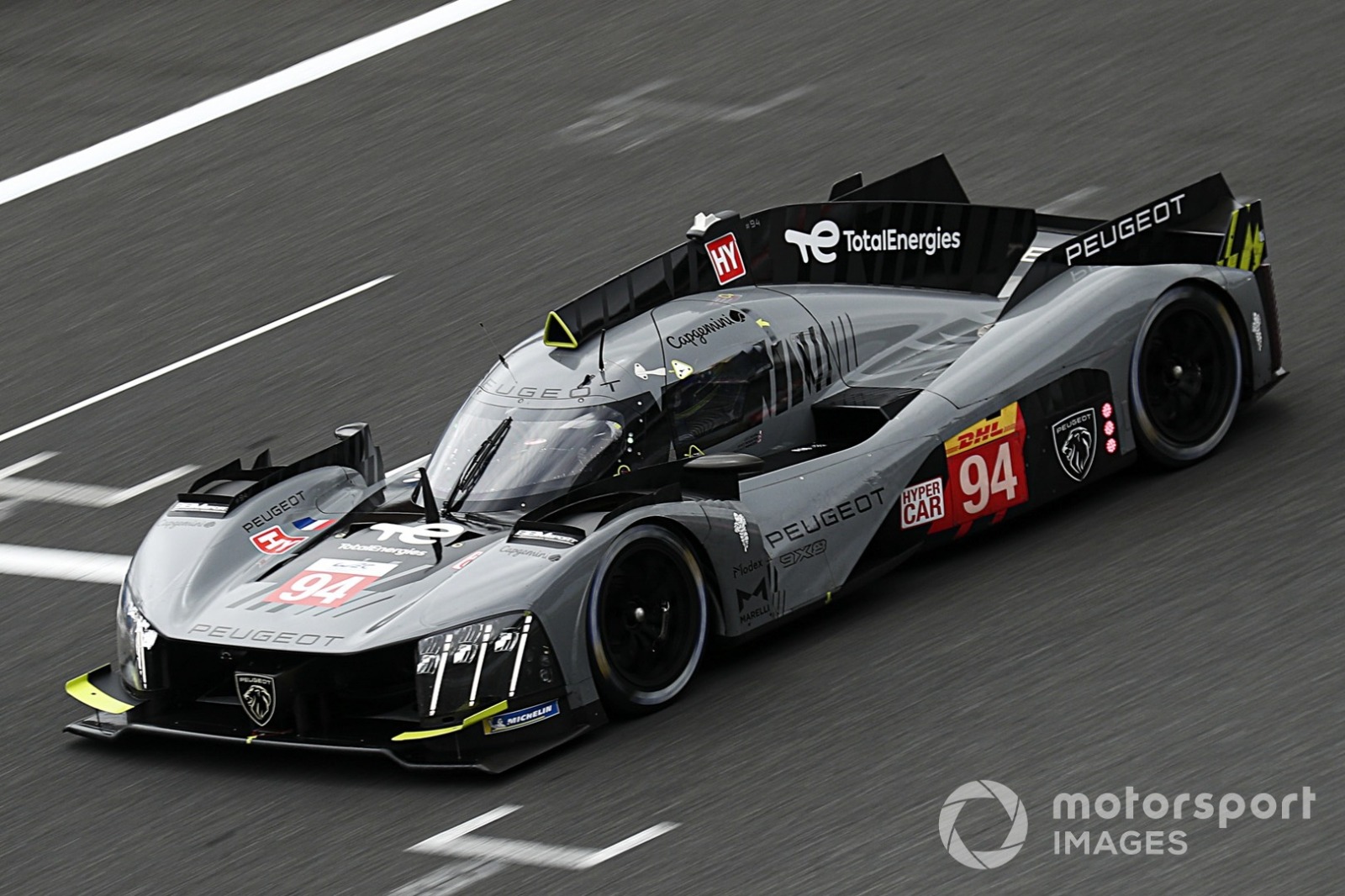 Fans and the media were wondering why Peugeot hadn’t entered the virtual realm, too. After all, it returns to Circuit de la Sarthe in the real-world later this season and has won there three times before.

Given the competitive nature and plethora of professional drivers who already compete in events like the Le Mans Virtual Series, the push to get involved was almost a no-brainer.

“We know that the level and competition is very, very tough,” Dussossoy admitted. “When you see Team Redline and drivers like [Max] Verstappen, who are as fast as the sim racers… we just want to be consistent.

“It’s the first experience for us and we will be happy. We have this set-up at the headquarters [in Versailles], which is important to us because we are at the core of Peugeot motorsport. 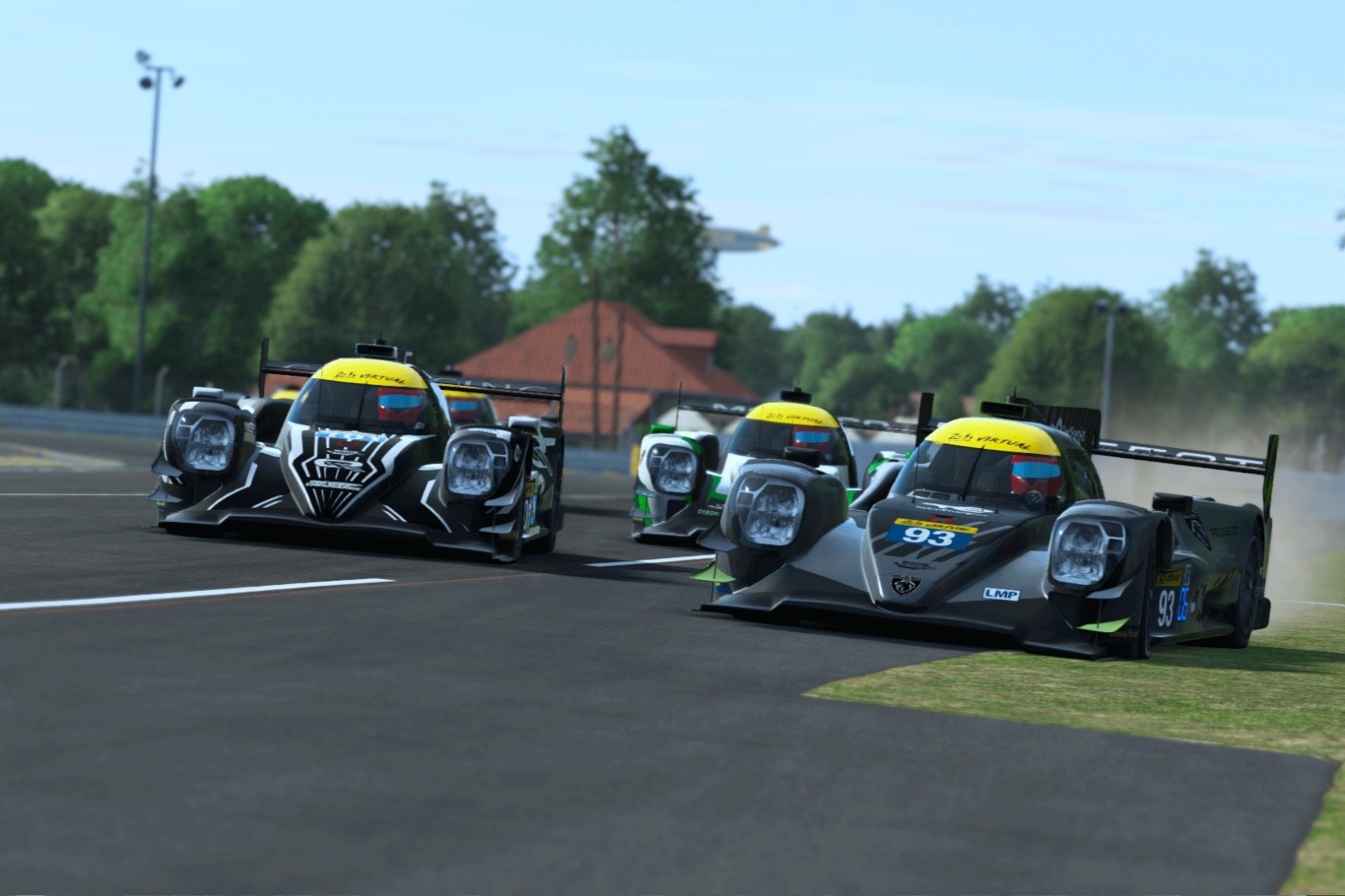 “The workshop with the World Endurance championship-competing 9X8 is just next door. For us, it’s not only the race, but the whole event for media partners, fans and our employees, too.”

Peugeot Sport will be racing the stunning wingless vehicle at the 2023 WEC, as well as the real-world 24 Hours of Le Mans. 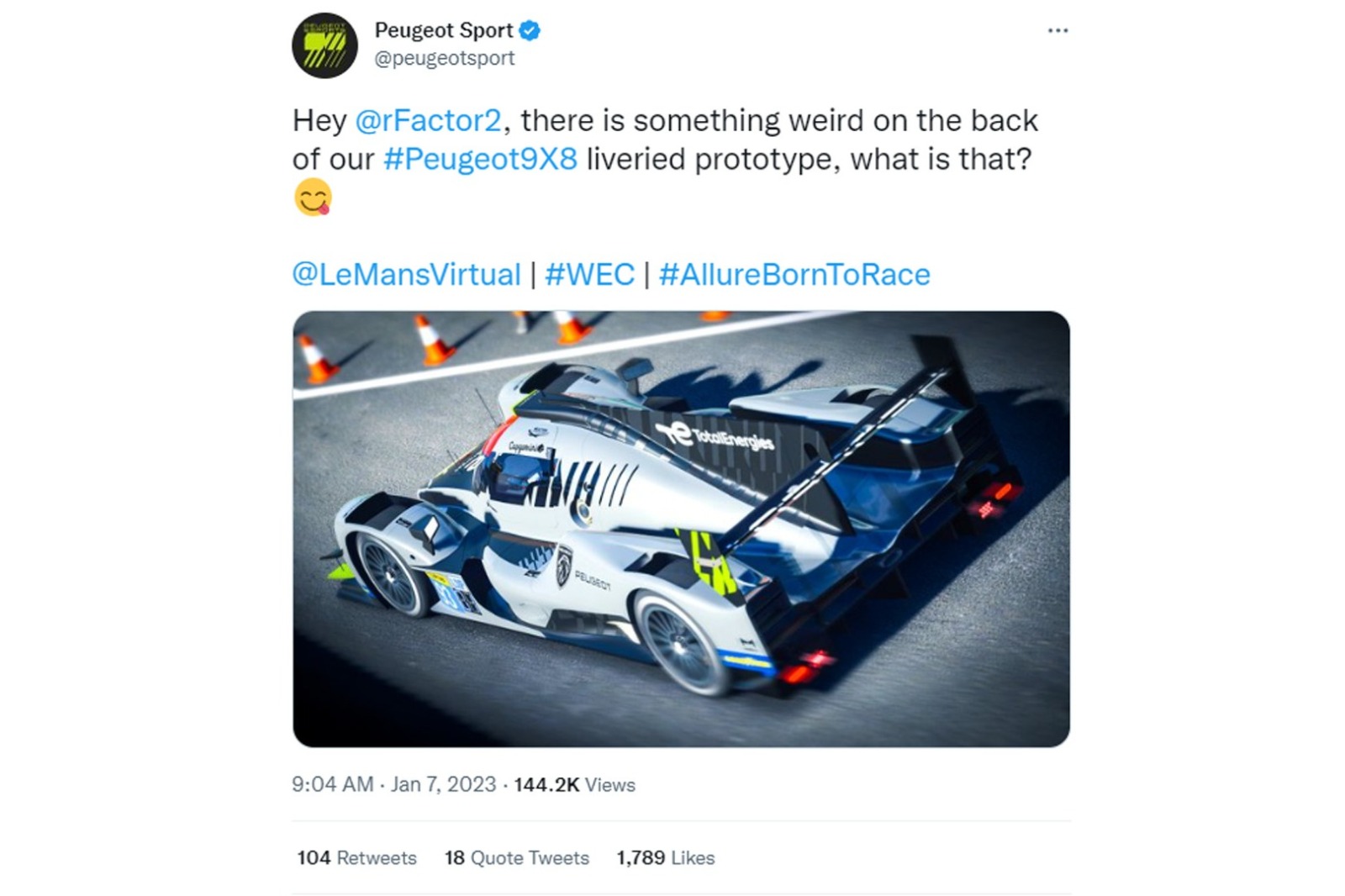 However, they’ll be rocking the rear wing virtually this weekend. A requirement in the event since every LMP car is identical to their opponents, aside from their choice of livery.

“It was a bit of a joke,” smiled Dussossoy when talking about Peugeot Sport’s cheeky tweet from last week. “Everybody has the same shape and we can put the livery on it. We have the Peugeot brand on the wing and it’s fine.

“The 9X8 looks better without it, though.” 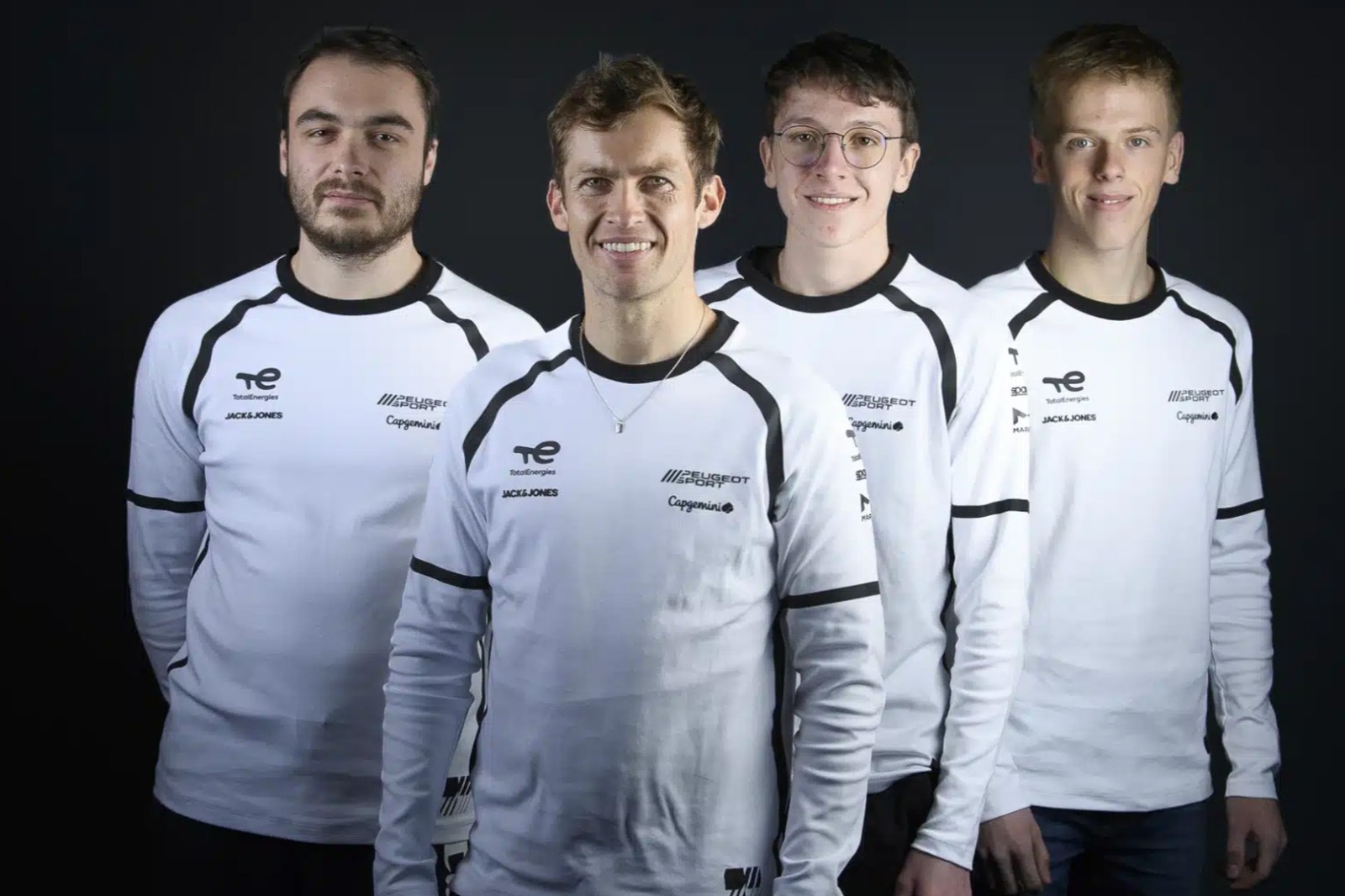 You can watch the 24 Hours of Le Mans Virtual live from 1pm GMT Saturday 14 January on Traxion.GG and Motorsport.tv.

Plus
Plus
WEC
Monza
7 m

Plus
Plus
Esports Apr 2, 2020
Jonathan Noble