A jump-start penalty for DiRT Rally 2.0 World Series champion Killian Dall'olmo handed victory to his brother Quentin in the Montalegre World Rallycross Invitational round in association with Motorsport Games

Killian dominated the five-driver final, taking his joker lap on the first lap after his jump-start and returning to a comfortable race lead once his brother completed his joker.

However, he was given a 20-second penalty for a jump start, which left top qualifier, Quentin, with the event win ahead of Junior WRC and DiRT Rally 2.0 development driver Jon Armstrong.

On his virtual rallycross debut, 2016 Supercars champion Shane van Gisbergen took the final spot on the podium despite multiple spins in the final.

He collided with Swedish rally driver Mattias Adielson, who won the inaugural event at Catalunya, on the opening lap.

Adielson was handed a post-race penalty which dropped him behind avid sim racer van Gisbergen. 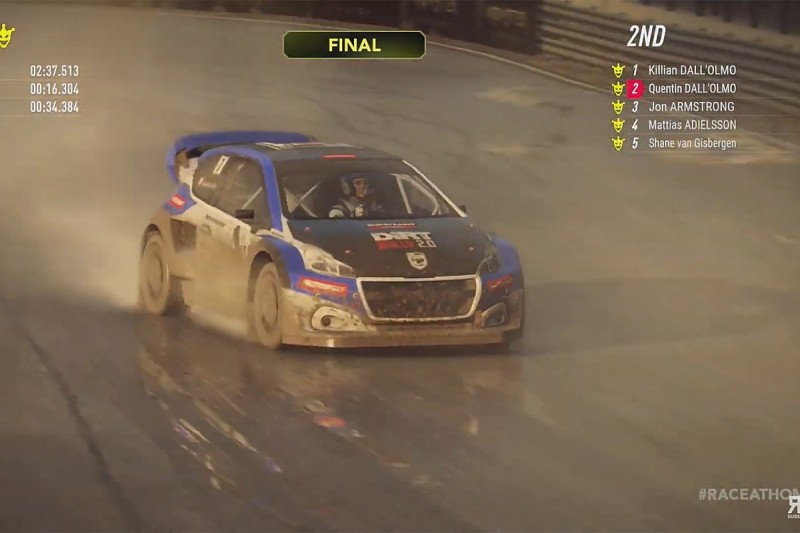 Van Gisbergen denied reigning World RX champion Timmy Hansen a spot in the final with a bold move on the inside of Hansen when the 27-year-old slid wide at the Turn 1 right-hand hairpin in the first semi-final.

Hansen slipped further back thereafter and was eliminated along with Czech sim racer Lukas Mateja and the GCK Megane driver Rokas Baciuska, who picked up a track limits penalty that dropped him out of the qualifying positions.

The second semi-final saw training partners Kevin Hansen and Henrik Krogstad eliminated with Adielson sneaking into the final as the fastest third-place driver.

The next World RX Esports Invitational event is currently scheduled to take place at the virtual Spa-Francorchamps circuit on 17 May.