While Rast's win on Saturday in Austria relied on a fair dose of controversy, this time there was little doubt that Audi deserved the honours.

Rast did need some cooperation from Audi stablemate Nico Muller, who he passed without much in the way of argument into Turn 3 with 13 laps remaining.

At that point Rast's late-stopping Team Rosberg team-mate Jamie Green was still out in front, but once the Briton pitted it was Rast all the way.

Muller continued to shadow Rast to the finish, even taking a couple of glances down the inside of Turns 2 and 4 on the final lap.

Gary Paffett converted his pole position into an early lead in his Mercedes, before Muller drew alongside at Turn 3 on the third lap and completed a pass on the back straight.

Paul di Resta - who entered the race holding a narrow series lead from Mercedes team-mate Paffett - ran third from Rast, the BMW of Joel Eriksson and Pascal Wehrlein's Mercedes, with little to choose between the top six.

Wehrlein was the first of those to make his mandatory tyre change, while Eriksson fell away before he made his.

As Augusto Farfus parked his BMW on the grass next to the back straight and a possible safety car never came, Rast took the opportunity to dive into the pits.

Di Resta stopped a lap later, but could not prevent the up-to-speed Rast from passing him around the outside of Turn 3 on his out-lap.

Muller and Paffett went one lap longer, and Paffett was only merging onto the track at the pit exit when Rast sailed past.

Rast then closed on Muller before making his expected pass for victory. 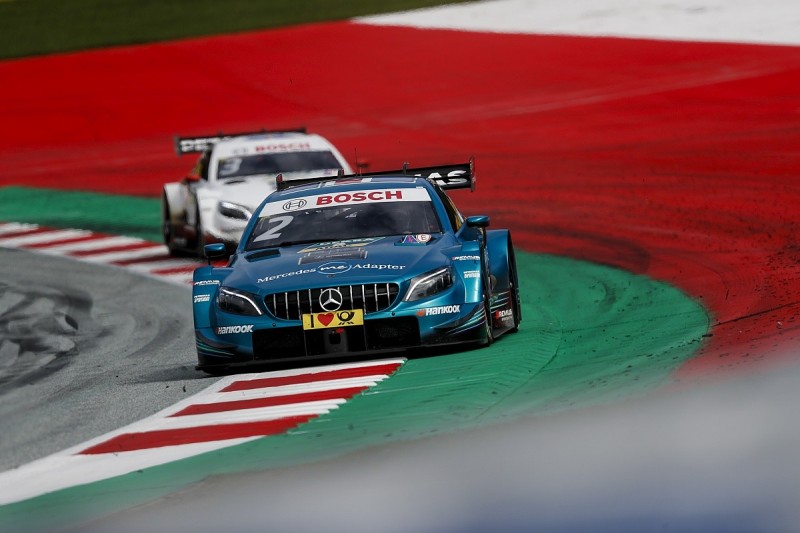 Paffett stayed in front of di Resta for two laps after his stop, before the Scot passed him at Turn 3 for a net third place, but four laps later Paffett went back ahead along the back straight.

Paffett's eventual third from di Resta means that he has cut the points gap to four with only the Hockenheim finale to come, while Rast is 30 adrift - with 56 available.

Eriksson completed one of the most impressive drives of his DTM rookie season to take fifth as the highest-placed BMW racer, with Wehrlein sixth.

BMW's Timo Glock had two notable fights with Mercedes drivers, one before the stops with Edoardo Mortara, and then one later in the race with Daniel Juncadella.

Juncadella outbraked Glock into Turn 4 but also outbraked himself, driving through the gravel trap before rejoining.

Glock therefore took seventh from Mike Rockenfeller's Audi, while Philipp Eng got his BMW ahead of Mortara on the final lap for ninth, ahead of Juncadella and Green.

Sebastien Ogier enjoyed an entertaining fight at the back of the field with Farfus, which he won, before the Brazilian's retirement.