After a safety car start, Wickens wasted no time in nailing an overtake on fellow Mercedes C63 driver and polesitter Gary Paffett at Turn 3 when the race got going before romping off into the distance to win by 10.955 seconds.

Paul di Resta finished second having also worked his way ahead of Paffett, who backed up his first podium of the season last time out at Zandvoort with third, 1.3s behind di Resta.

A downpour between qualifying and the start of the race mandated a safety car start.

Three laps behind the safety car was deemed sufficient, with Wickens closely following in Paffett's wake through the opening corners at the green flag before slicing up the inside of the Briton at the Turn 3 apex.

Wickens romped clear from there, and though di Resta snuck up Paffett's inside before the halfway mark the Briton had no answer to Wickens' pace, instead settling for second as Mercedes cars locked out the podium. 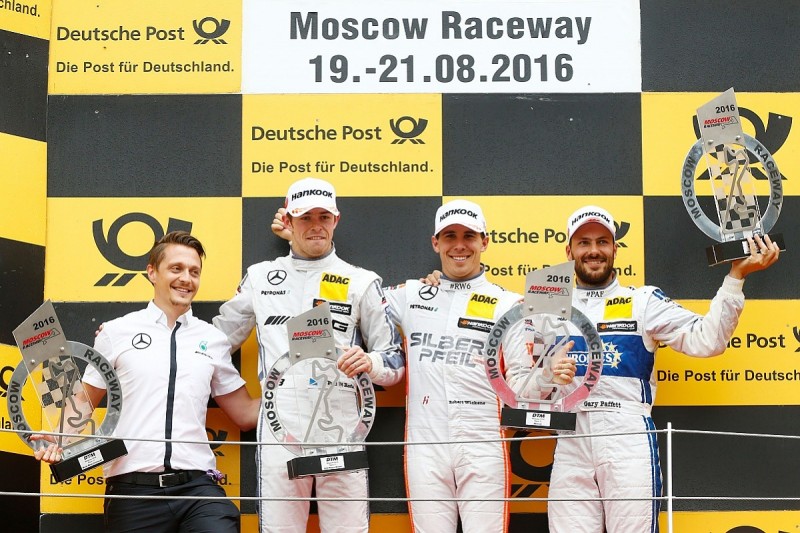 Canadian Wickens now heads the championship by three points from erstwhile leader Marco Wittmann, who had a torrid race, making up just one position in his Team RMG BMW to finish 19th.

Maximilian Gotz added an extra gloss to Mercedes' showing, finishing fourth in his HWA C63 after holding off the leading Audi of Mattias Ekstrom and BMW's Maxime Martin.

Behind them, Felix Rosenqvist claimed the final point on his DTM debut in the second ART Mercedes.

Despite being overtaken by Mortara and Green, the Swede's fine earlier pass on BMW driver Timo Glock was enough for those relegations to leave him in 10th, 1.177s behind Scheider.