After a delay of several hours caused by looming fog, which had caused qualifying to be cancelled with the race started in order of championship positions, the battle for victory looked set to be decided between Fraga’s Red Bull Ferrari and the polesitting Grasser Lamborghini of Bortolotti.

The Italian appeared to be the quicker of the two approaching the closing stages and went for a move up the inside of the final corner on lap 29 of 38, but Fraga shut the door.

Both cars spun in the resulting contact, with Bortolotti stranded in the middle of the road, but Schubert BMW driver Van der Linde managed to avoid the carnage and secured a third win of the season by 1.928s.

His brother Kelvin van der Linde made use of a late stop to vault up from 19th in the early phases to finish second in his Abt Audi, as his team-mate Ricardo Feller beat defending champion Max Gotz’s Winward Mercedes to complete the podium in third.

At the start, Fraga made superb early progress from sixth on the grid and appeared to get his tyres up to temperature quicker than the cars around him as he led before the end of the lap.

The Brazilian had nosed between van der Linde and Rene Rast (Abt Audi) to take second at Turn 2 on the opening lap and then zapped Bortolotti for the lead into the chicane, the pair continuing to run line astern throughout the opening stint.

Lucas Auer initially ran third in his Winward Mercedes, but slipped backwards behind Sheldon van der Linde, Thomas Prening (who later retired with splitter damage on his Bernhard Porsche) and Gotz before starting the pit sequence on lap nine.

Fraga was first of the leaders to pit on lap 20, with Bortolotti following suit on the next tour. The Lamborghini briefly emerged ahead, but with his tyres already up to temperature Fraga snuck past around the outside of Turn 3. 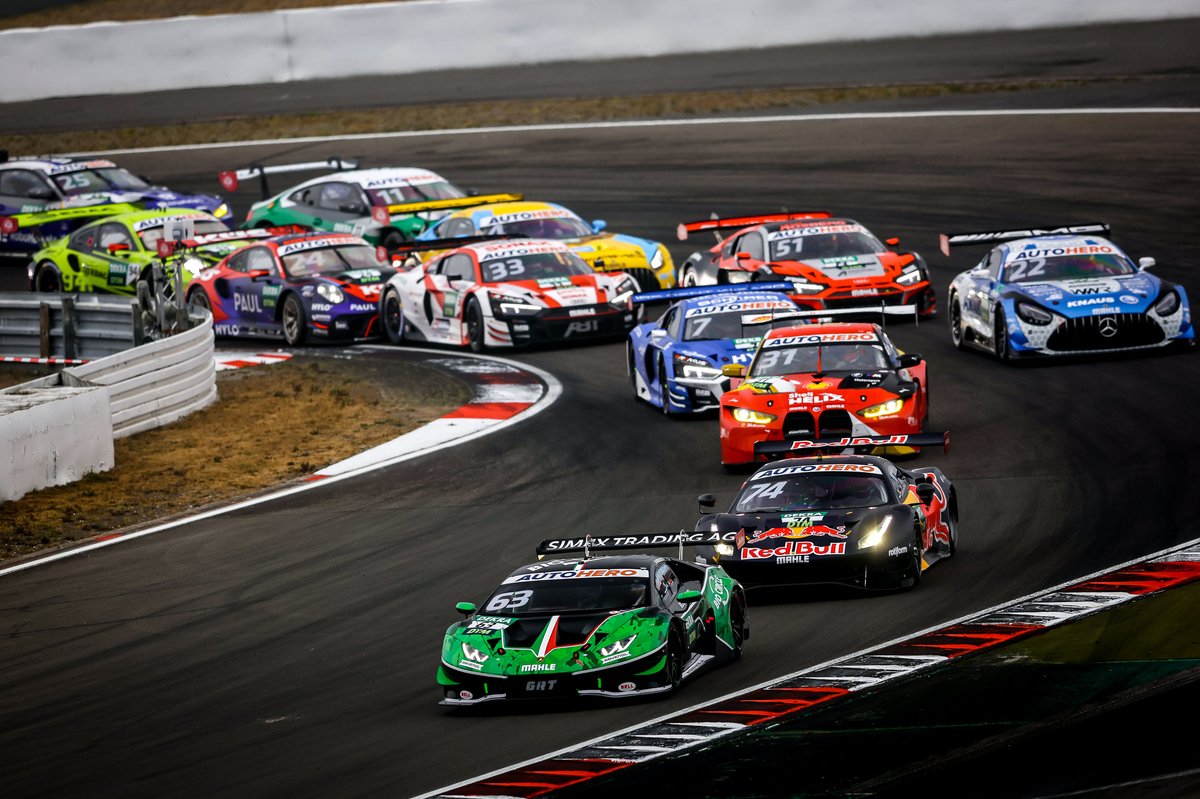 Sheldon van der Linde had pitted on lap 17 and had to pass Gotz – also struggling with tyre warm-up fresh out of the pits - before setting off after the leading pair.

Rast had also leapfrogged Gotz by pitting on the same lap as Bortolotti, but was coming under huge pressure from the Mercedes and Laurens Vanthoor’s SSR Porsche when the Belgian misjudged his braking for Turn 3 and tapped Rast into a spin, which also forced Gotz wide and allowed Feller to sneak ahead.

Auer finished fifth, while Philipp Eng (Schubert BMW) held off a charging Nick Cassidy (Red Bull Ferrari) for sixth after a spirited battle that included three-wide contact with Rast at one point.

The three-time champion eventually finished ninth, behind Marco Wittmann, after an eventful race. He had earlier made contact with Nico Muller that forced the Rosberg Audi to retire with a puncture and tapped Dennis Olsen’s SSR Porsche sideways to bend the Norwegian’s steering after they had run three-wide with Gotz at the hairpin.