Di Resta benefited from a stout late-race defence of second place from team-mate Edoardo Mortara, which delayed Frijns enough to prevent a challenge from the Dutchman, who had been lapping two seconds quicker as he caught the two Mercedes cars.

The race started in wet conditions, with polesitter di Resta just about hanging on from Mortara over the opening corners, before the rocket-starting Gary Paffett moved up to second.

Mortara pitted for slicks two laps earlier than the two leaders, but they were still in front of him when they rejoined.

Up front were Daniel Juncadella (Mercedes) and the BMWs of Augusto Farfus and Bruno Spengler, who had all started the race on slicks.

Juncadella looked in the pound seats, with a 42-second advantage over di Resta easily enough to make his mandatory stop and rejoin still in front.

But when championship leader Paffett ran wide at Turn 8, he rejoined the circuit and crashed into Mortara, sidelining Paffett and causing a safety car - and scuppering the hopes of those who had started on slicks.

Farfus got the best of the restart, and Juncadella ran wide at Turn 4 trying to regain his lead from the Brazilian.

Spengler was shuffled back at the restart, and then collided with Jamie Green's Audi at Turn 8, with Rene Rast also caught up.

Lucas Auer was also out of the race after a clash with Joel Eriksson, for which the BMW rookie earned a drive-through penalty, and the safety car was called out again.

Now the man on the move was Philipp Eng, who, from the back of the grid, was among the first to switch to slicks and whose BMW had been lapping three seconds faster than di Resta before the early race leader pitted.

Eng had jumped di Resta at the first restart for the net lead behind the yet-to-stop Farfus, but lost out to the Scot on the second restart. 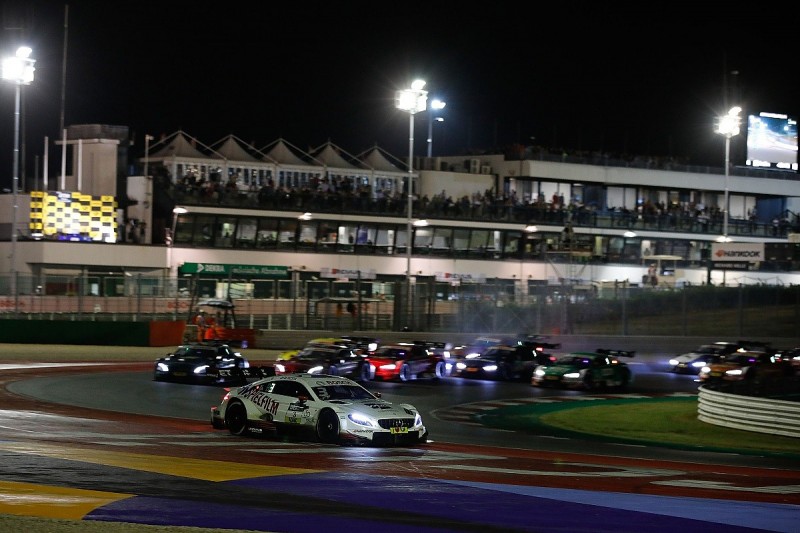 But Eng wasted little time getting back in front, and his advantage over di Resta extended to as much as 2.6s, with Farfus pitting out of his way just as he caught him.

Suddenly, Eng and his BMW stablemates began to lose serious pace to the Mercs, but the Audis were even quicker.

Di Resta moved in front from Mortara and the yet-to-stop Juncadella, although the Spaniard then ground to a halt on the grass verge with a mechanical problem.

Once Frijns had cleared the tardy Eng with four laps remaining, he slashed the gap to the Mercedes pair, but Mortara proved tough to pass.

Finally, Frijns dived inside at Turn 14 on the final lap, surviving a clatter from Mortara at the following corner that knocked him wide as he claimed second, 1.973s behind di Resta.