Marco Wittmann salvaged a disastrous weekend for BMW by winning a chaotic Sunday DTM race at the Hungaroring, which was red-flagged when several pitlane incidents left marshals and mechanics injured

Light rain started falling shortly after the start but, with conditions not changing drastically, the majority of the field decided to stay out.

However as the conditions suddenly worsened, polesitter Lucas Auer dived into the pits but couldn't stop his Mercedes and slid into the pit building, as well as a couple of marshals.

As two ambulances drove into the pitlane, the race was subsequently red-flagged.

Auer had led an all-Mercedes top six at the original start, before being overtaken by Pascal Wehrlein as track conditions became greasy.

With Auer, race one winner Paul Di Resta and Mortara all pitting before the red flag, the three remaining Mercedes cars of Wehrlein, Gary Paffett and Daniel Juncadella led after the restart.

In almost completely dry conditions, Paffett, running on wet tyres, instantly started to drop down the field and ran as low as 17th before pitting.

Paffett's woes allowed Wehrlein to build a gap, but Juncadella rapidly closed in and got past at Turn 1.

The duo was followed by Nico Muller and Jamie Green, the last drivers yet to pit, with Philipp Eng at the head of a queue of BMW drivers, including Wittmann, Timo Glock and Joel Eriksson.

Juncadella pitted with eight minutes on the clock, but rejoined well down the order and finished out of the points in 14th.

Wittmann, having passed Eng, took over the lead once all the stops had been completed and took his first win of the season ahead of Glock, who recovered from being spun around by Muller at the original start. 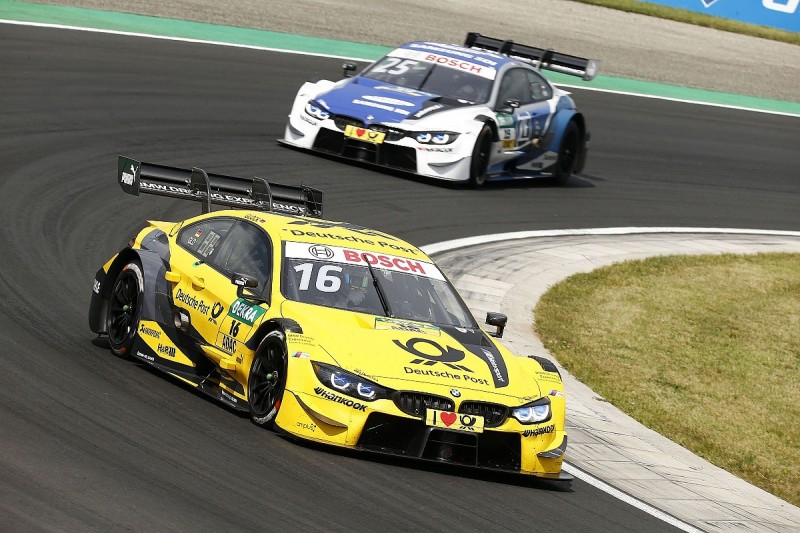 With Paffett finishing last, Glock reclaimed the championship lead with an 11-point gap.

Eng completed an all-BMW podium, as he held off a late charge from Audi's Mike Rockenfeller.

Di Resta gained several positions late on to take fifth, ahead of the BMWs of Eriksson, Spengler and Augusto Farfus.

With visible bodywork damage on the front nose section of his car, Auer had to settle for ninth, ahead of Mortara.