Robin Frijns feels his Audi stablemate Rene Rast was responsible for the spin that dropped him outside the podium spots in the opening DTM race at the Nurburgring.

Championship rivals Frijns and Rast were battling for second position in the first of the two races on the Nurburgring's grand prix layout last weekend, with points leader Nico Muller leading the race out front from pole position.

On lap 21 of 31, Frijns made a late lunge on Rast under braking into Turn 1, but he hit the inside kerb and was launched into the air, causing him to spin off the track as he landed.

The incident allowed both BMW's Marco Wittmann and Audi driver Mike Rockenfeller through into third and fourth positions, while Rast finished second to gain crucial points over Frijns in the championship battle.

Frijns and Rast had nearly made contact earlier in the race, when the Abt Audi driver pushed the reigning champion wide on lap 13 while heading into Turn 3.

Rast later managed to regain that position by stopping one lap earlier than Frijns and using the advantage of fresher tyres to overtake him on his out lap into Turn 2.

Speaking after the race, Frijns felt he could have avoided running over the kerbs had Rast left him enough room on the inside of the corner during his second attempt at passing the reigning champion. 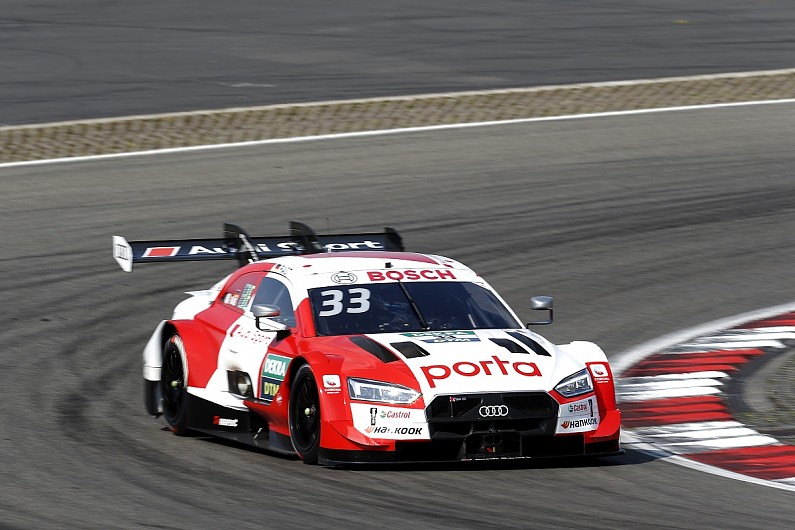 "Clearly after overtaking for the first time at Turn 2 he was on the outside, I think his front wheel was on the side of my rear wheel so I really didn't see him. I don't know if we touched or not but he ran wide.

"Then I received it back. I was surprised to get something in return like this, it was quite hard. But just the race was not mine.

"Obviously I came from far away, I did it before. I overtook before there. I'm strong on brakes at Turn 1.

"I wouldn't say it was not fair or fair or whatever. The gap was just closing and if you have committed to a gap you had pull out of it."

Rast felt Frijns was coming from too far behind to complete the move and refuted the Dutch driver's suggestion that he didn't give him enough space into Turn 1.

"I didn't expect him to be honest to brake that later, to dive in," Rast explained.

"I turned in, at one point you have to look to the corner, when the last time I checked he was behind me and I turned in and he suddenly came to the right inside.

"I didn't expect him. He came with such momentum. I think there was still some room. It was not like we had closed contact.

"Obviously once I saw him right next to me I opened up the steering to give him some more space.