X-raid Mini driver Carlos Sainz Sr has taken a commanding lead in the 2020 edition of the Dakar Rally after topping stage 10, which was suspended before the halfway point

The Haradh - Shubaytah test was due to feature 331.8-mile of timed competition in the Rub' Al Khali desert, but worsening weather conditions forced the organisers to end the competitive running early.

Citing "strong wind gusts" and all safety resources being "already mobilised", the Dakar declared the results of the stage at the 138.6-mile mark in the car competition.

However, the first half of the planned full stage had already proven sufficient for Sainz to make up decisive ground relative to his main rivals Nasser Al-Attiyah and Stephane Peterhansel.

Toyota driver Al-Attiyah, who won the Dakar last year and entered Wednesday 24 seconds behind Sainz, started the stage second on the road behind Peterhansel, and was tasked with following the Frenchman "like glue". 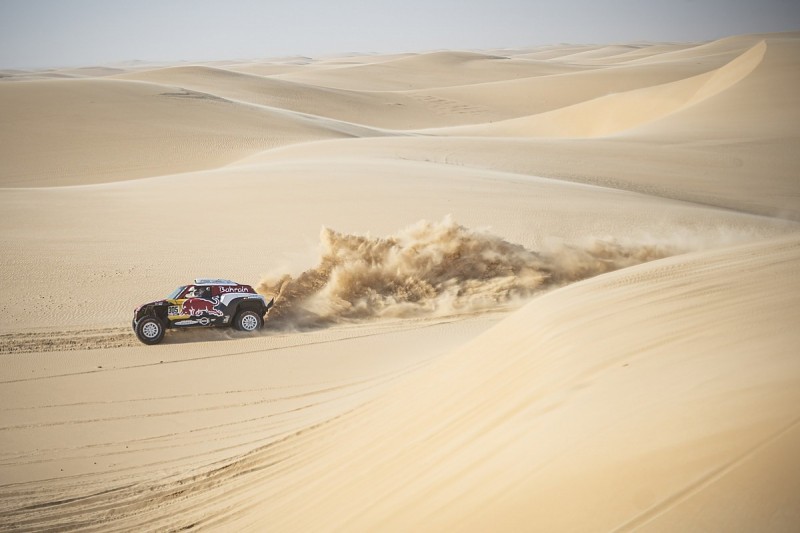 Yet both he and Peterhansel got lost trying to find the 138.6-mile waypoint, with Al-Attiyah surrendering nearly 15 minutes.

Sainz, meanwhile, came through without major setbacks, ultimately picking up the stage win and inheriting a lead of 18m10s and 18m26s over Al-Attiyah and Peterhansel respectively in the general classification.

Two-time Formula 1 champion Fernando Alonso, who was 10th heading into the day, rolled his Toyota two kilometres into the stage, which resulted in a long stoppage and forced Alonso and co-driver Marc Coma to remove the windscreen from their Hilux.

He arrived at the 138.6-mile waypoint over an hour slower than Sainz, and has dropped down to 14th in the standings.

The competitors will now carefully make their way to the Shubaytah bivouac, where they will not be allowed to receive any assistance from their technical crews under the rally's 'marathon stage' rule.

The last two days of the rally are due to feature around 460 timed miles.