Competing in the 375km Sakaka and Neom loop that formed the second part of the marathon stage, Loeb suffered two punctures in the first 80km when he had only one spare tyre on his Prodrive-built BRX1 contender.

After being stranded for over five hours in the middle of the stage, Loeb and co-driver Daniel Elena made the decision to return to the bivouac by road, marking an end to their 2021 Dakar campaign.

The Bahrain Raid Xtreme team's official truck - the #532 MAN machine driven by Jordi Esteve, Rafa Tibau and Arnald Bastida - damaged its rear axle during Sunday's Stage 7 and ran out of time to complete the stage, which meant it was thus unavailable to assist Loeb.

The WRC legend has been hit by a series of problems in his fifth attempt at Dakar and was sitting 43rd overall heading into Stage 8, over 13 hours down on leader Stephane Peterhansel of X-raid Mini.

Loeb's first major setback came in the fifth stage when he suffered several punctures and got lost in the Saudi Arabia desert, leaving him almost an hour down on the leaders.

A broken suspension arm followed in Stage 6, with any hopes of a quick fix ending when the truck arrived with the incorrect replacement part - two right suspension arms instead of one right and one left.

It forced Loeb to wait a total of eight hours until the correct replacement part was delivered - with the actual repair only taking 20 minutes. 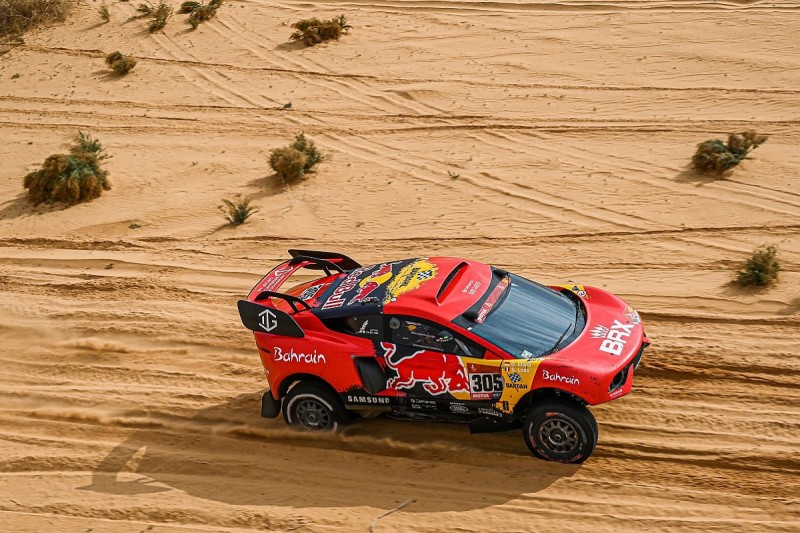 Having already dropped out of the reckoning and admitted he was focused on development work to assist team-mate Nani Roma, he suffered more mechanical pain in Sunday's Stage 7 with a damaged bearing and conceded a further two hours in total upon reaching the end of the stage.

These delays and the absence of a support truck prompted the team to provide Roma "with the majority of the team's available spare tyres to preserve the competitive position within the rally," Bahrain Raid Xtreme said in a statement.

Loeb said: "We have faced a lot of challenges in the last eight days, but throughout this Dakar, myself and Daniel, my co-driver, have been determined to reach the finish of the rally.

"Every day we remind ourselves how lucky we are that this is our job, and to be part of the BRX team.

"We came to the Dakar with the same ambition as the team; to achieve great results, but today we had no other choice but to retire.

"This morning we made the decision to give Nani and Alex our spare wheels, to optimise their chances, but with punctures during the special stage, it was impossible for us to go any further.

"I am disappointed for the team, but we have learned a lot of lessons, and will come back stronger next year."

Loeb was also the centre of a dispute with organiser ACO after he was handed a five-minute penalty for speeding in a slow zone, labelling the event stewards "incompetent".

The ACO later responded to Loeb's remarks, saying he exceeded the speed limit by 77km/h and that he "does not pay attention to his co-driver's instructions".