X-raid Mini driver Orlando Terranova leads the 2020 Dakar Rally after the second stage, on which star debutant Fernando Alonso has already lost more than two hours due to damage.

Two-time Formula 1 world champion Alonso was close to the frontrunners' pace over the first 100 miles of the test, but his Toyota Hilux was then halted after an impact with a rock that left it with wheel and suspension damage.

Alonso and co-driver Marc Coma attempted repairs on the spot and ultimately resumed running after giving up more than two hours on the stage.

The Al Wajh - Neom stage, featuring 228 miles of timed competition, is the first of six in this year's Dakar for which the roadbook is made available to crews minutes before the start, rather than the afternoon of the previous day.

Much of the day's proceedings were dominated by Saudi Arabian Yazeed Al Rajhi, who led at each of the first five waypoints and was up by more than six minutes after 155 miles, making up for time losses he incurred in an early detour on Sunday. 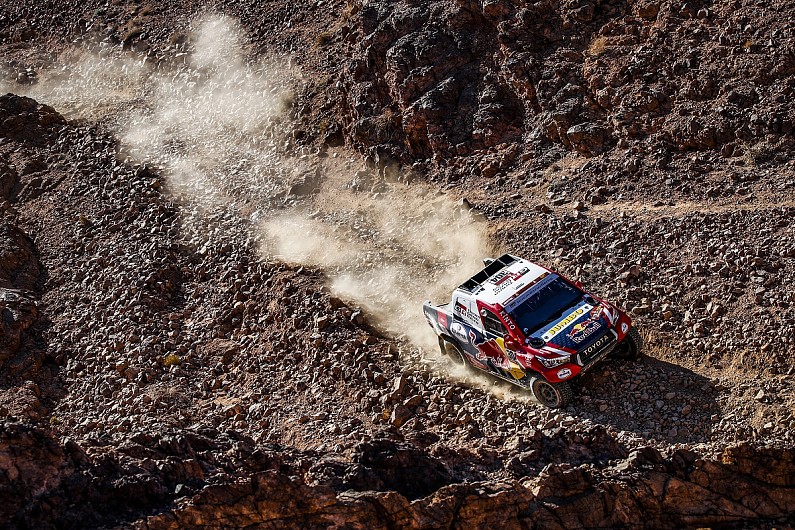 Al-Rajhi's bid for stage victory and the overall lead fell apart late on, however, as he ceded more than 20 minutes to fellow Toyota driver Giniel de Villiers (pictured above), who ended up as the stage-two pacesetter.

However, de Villiers' opening-stage dramas - he finished with a slow puncture - mean he is only sixth in the general classification after two days, and trails Terranova by 12 minutes.

Argentinian Terranova, in a four-wheel drive Mini John Cooper Works Rally, was second-fastest on the day, while Khalid Al Qassimi in a privateer Peugeot and Mathieu Serradori in a Century buggy made it four different cars in the top four in the stage rankings.

The Dakar's two most recent winners, Mini buggy driver Carlos Sainz Sr and Toyota's Nasser Al-Attiyah, both surrendered more than 10 minutes on Monday but are in the top three in the overall classification, with Serradori a surprise fourth.

Vaidotas Zala, who claimed a shock maiden win on the opening stage, was 19 minutes off Terranova's pace on stage two and now sits fifth overall.

Dakar's all-time most successful competitor Stephane Peterhansel had been third behind Zala and Sainz, but lost more time than either as he struggled with a steering issue on his Mini buggy.

Peterhansel, however, only trails Terranova by 13 minutes in the general classification and he sits in eighth place, close behind de Villiers and Al Qassimi.