Four-time British Touring Car champion Colin Turkington scored his first victory of 2021 in the opening race of the second round at Snetterton.

The Northern Irishman, who is a maestro at the Norfolk circuit, fended off a first-lap challenge from Tom Ingram, and from then on his West Surrey Racing-run BMW 330i M Sport never looked under serious threat.

Poleman Turkington and the entire top five of the grid opted to use the softer option tyre in this race, for which they all carried comparatively little success ballast – or none at all.

The extra grip from this played a large part in Turkington bogging down off the line, and his rear-wheel-drive start advantage was nullified by the getaway from front-row partner Ingram’s Excelr8 Motorsport Hyundai i30 N, which was 6kg heavier than Turkington’s BMW on 33kg of ballast.

Ingram challenged into Turn 3 on the opening lap, the leading pair rubbing panels, and then again around the outside of Agostini, where there was more contact.

Turkington eked his advantage out to over one second by lap five of 12, but a pair of fastest laps from Ingram brought the Hyundai back into the picture.

Ingram, worried about his soft left-front tyre in the heat, then elected to back off – Turkington reclaimed fastest lap to pull the gap out to 3.125s, but then he followed Ingram’s example and reined himself in to win by 2.932s.

“I was under big pressure on the first half lap,” said Turkington.

“There was more grip for the start, so that helped us bog down and we got even starts [with Ingram].

“I had to work hard and get my head down, but it’s always nice to get my first win of the year.”

From third on the grid, Rory Butcher had a lonely race to the final podium position in his Speedworks Motorsport-run Toyota Corolla. 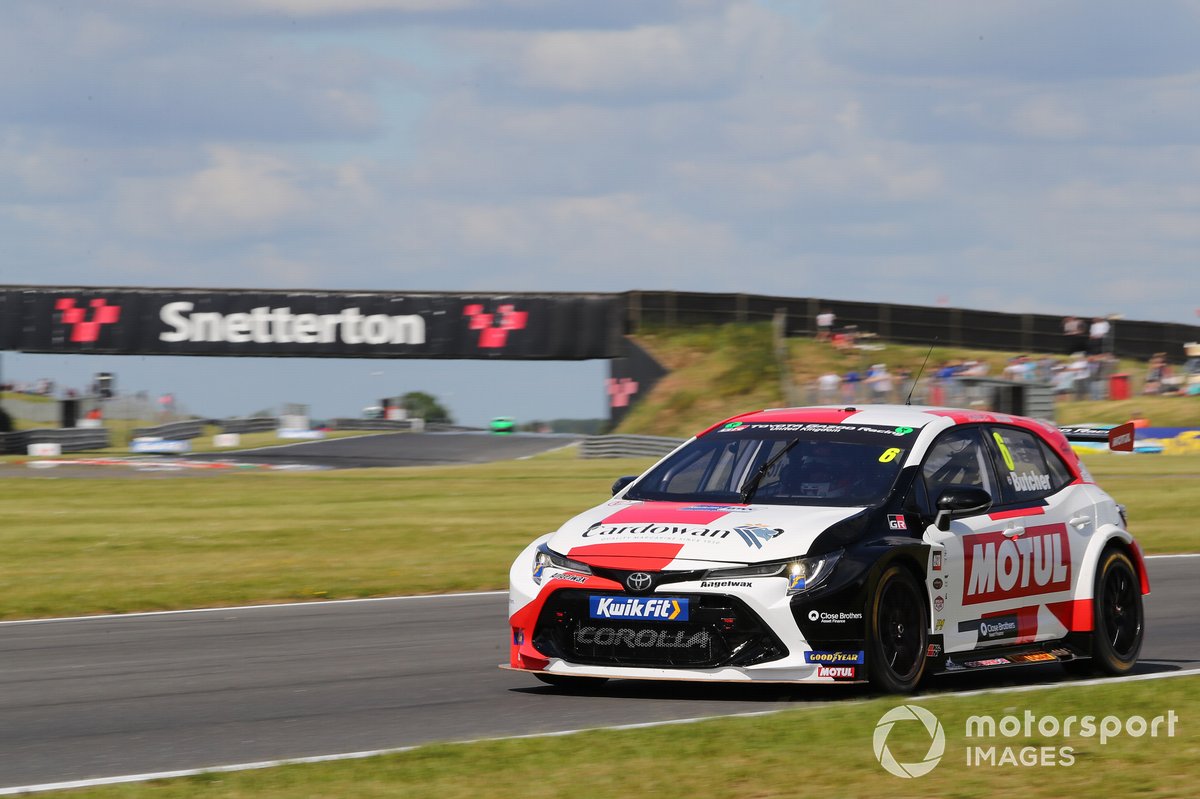 The gear-cut broke on the Toyota on the formation lap, meaning Butcher was having to lift for upshifts, and costing him straight-line speed.

Ollie Jackson, on the medium Goodyear, had a great first lap to impose his Motorbase-run MB Motorsport Ford Focus ahead of the soft-shod BMWs of Stephen Jelley and Adam Morgan.

This turned into the battle of the race, but Jelley managed to get his WSR BMW ahead of Jackson at the Hamilton left-hander with four and a half laps remaining.

Dan Lloyd then joined what was now the battle for fifth in the lead Power Maxed Racing Vauxhall Astra, but Jackson did a sterling defensive job to hang on from Ciceley Motorsport driver Morgan and Lloyd.

Points leader Jake Hill, running the maximum 75kg success ballast on his MB Ford, lost eighth place to the WSR BMW of Tom Oliphant at mid-distance, and then had to get his elbows out on reigning champion Ash Sutton as the Laser Tools Racing Infiniti Q50 driver attempted to recover from his low grid position.

That cost Sutton positions to Chris Smiley and Jack Goff and, although he repassed Goff’s Team Hard Cupra, he finished 11th behind ninth-placed Hill and Smiley’s Excelr8 Hyundai.

Further back, Gordon Shedden climbed from 28th on the grid, after losing his pole position to a technical infringement, to 15th in his Team Dynamics Honda Civic Type R.