Poleman Dave Newsham was shuffled back on the opening lap as Colin Turkington's WSR BMW shot through to lead, chased by Shedden.

The drama soon began as contact between Newsham (Toyota Avensis) and Matt Neal approaching Oggies spun the Honda across the road and put the Toyota out.

Behind, Jason Plato had to back off and his MG snapped sideways. It then speared across the track, hit the barriers and rolled.

Plato escaped injury, but the safety car was called.

As Turkington led at the restart, Bratt, Dan Welch and Ollie Jackson all had moments at Riches, but the race continued.

It soon became clear that Shedden's works Honda Civic had more pace then Turkington and he started attacking the BMW.

Just as in race two, Turkington defended from a faster Honda and, just as earlier, the battle was decided by a collision.

Shedden tried to dive down the inside into Agostini at half-distance, Turkington turned in and contact was made.

The latter spun back to seventh as Shedden headed off to victory, clear of Mat Jackson's Motorbase Ford. He had produced a good first lap from row three and was secure in second as team-mate Aron Smith defended third from Adam Morgan.

Morgan's Ciceley Toyota pressed Smith relentlessly until Sam Tordoff (MG), on a charge from row nine, arrived on his tail in the closing laps. 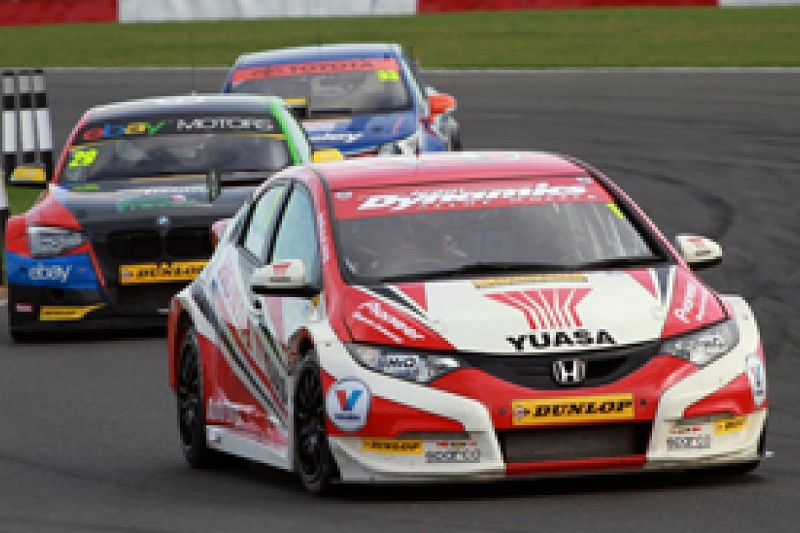 There were five cars briefly fighting for third, but the only change came when Turkington passed Jordan for sixth at Palmer on the penultimate lap.

Smith thus completed a fine weekend for Motorbase in third, from Morgan, Tordoff, Turkington and Jordan.

Further back, Neal recovered from his early off to come home eighth, while Rob Collard and Nick Foster made it three WSR BMWs in the top 10.