British Touring Car Championship race winner Adam Morgan is expecting to be on the grid for the final race of the day at Donington Park after his smash in the opener.

Morgan had just been passed for 11th place into the Old Hairpin by Ollie Jackson when he made contact on the exit of the corner with Jake Hill, sending his Ciceley Motorsport BMW 330i M Sport careering backwards into the barriers at high speed.

While Morgan hurt his back, the Ciceley squad is hard at work repairing the car for the final race of the day.

The incident also put a dent in the title hopes of Jackson’s MB Motorsport Ford Focus team-mate Hill, who was forced to pit to have his radiator cleared after spearing across the grass.

Hill recovered to finish 17th in that race and, with the success ballast taken off the Ford, he moved up to ninth in the sequel, putting him third in the starting line-up for the reversed-grid finale.

Neither Morgan nor Hill were willing to apportion any blame for the clash.

“It was a bit of a racing incident where Ollie went wide at the Old Hairpin, and I got the cutback on him,” Morgan told Autosport.

“He came back across, which forced me to move across, and unfortunately Jake was on the outside.

“That pinched me, and it just forced me into the wall.”

The damage forced Morgan out of race two while Ciceley continues to work on repairs.

“The rollcage is all right, most of everything’s OK, but it’s just pushed the chassis down on the tyres,” added Morgan.

“We’ve had Willie Poole [the renowned BTCC chassis wizard] working his magic and getting it ready for race three.

“I’m all right – I can feel my back now, which generally means I’ll really be feeling it tomorrow!” 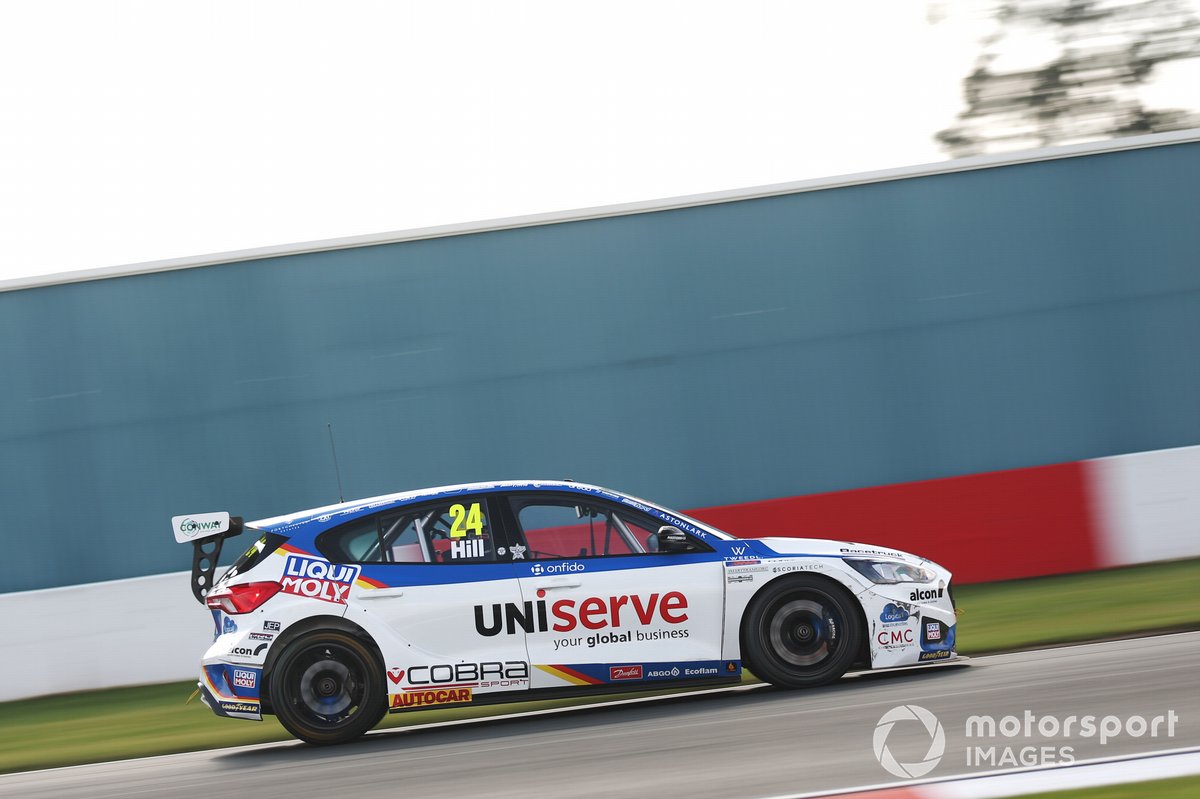 “I saw Ollie run wide, and I knew I was getting a run, but I couldn’t see how far Adam had got next to Ollie – I was almost door to door with Adam.

“It’s not Adam’s fault at all, but there was a big whack and unfortunately I was the bloke who turned him around – I feel really sorry for him.

“After that I could tell the temperatures were going up, and I knew I had a free pitstop under the safety car.”

Hill added that he has been struggling with an ongoing clutch issue “which is losing us a couple of rows on the grid at each start”, despite a change of slave cylinder for the second race.