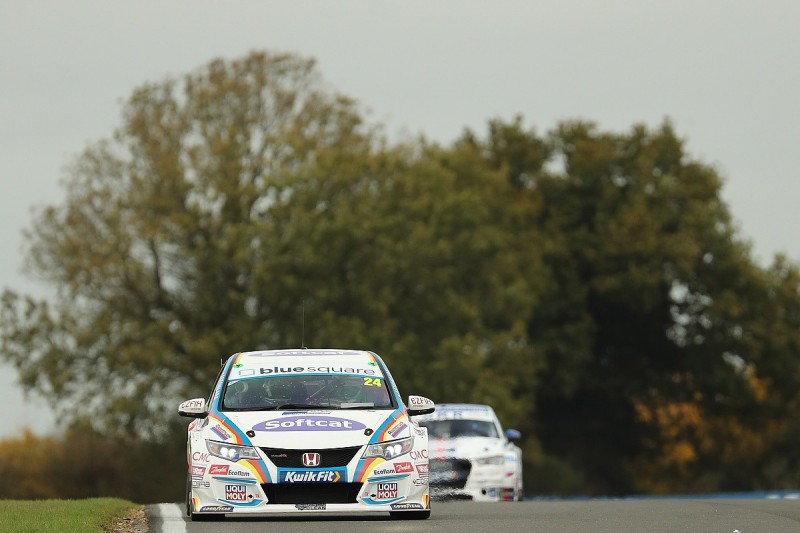 While Hill lapped his old-spec AmD-run Civic FK2 a whopping 0.558 seconds quicker than the opposition, four-time champion Colin Turkington was the quickest of the title contenders, in fourth spot.

Hill looked strong for most of the 50-minute session, with the weekend schedule changing this weekend from its normal format of two 40-minute periods.

The Kent racer had his best BTCC weekend to date at Croft last time out, with two podiums, but paradoxically dropped out of the championship top 10 - and is therefore not carrying any success ballast - due to being leapfrogged in the points by Josh Cook, who won two races in North Yorkshire.

Although Hill's fastest lap was 0.8s quicker than his next best, he was on for a decent lap on an earlier run when he found the Audi of Ethan Hammerton in the way in the final sector.

"I'm absolutely chuffed with that," said Hill ahead of qualifying, which this weekend uses an experimental format whereby the top 10 go through to a shootout to form the first five rows on the grid.

"It was definitely not to be expected - I was surprised to be that far clear, and we stayed on used tyres in the hope of being in the top 10 shootout.

"The car's working well and the team are doing a great job."

"It's just a case of it being so cold," said Hill. "Everything's just not working as it should.

"It's difficult to drive and I don't see it getting much better - we're not supposed to race at the end of October!"

Hill's time knocked the hard-trying Adam Morgan off the top in the closing moments of the session.

The Ciceley Motorsport Mercedes A-Class, carrying 12kg of success ballast, had a strong run late in the session, although Morgan had a moment under braking for Agostini on the lap after his best.

A last-lap improvement lifted the BTC Racing Honda Civic of Michael Crees to third, ahead of Turkington, who spent much of the second half of the session atop the times in his West Surrey Racing-run BMW 330i M Sport, which is on 48kg of ballast and set some consistently quick laps.

Tom Ingram, his Speedworks Motorsport-run Toyota Corolla on 42kg of ballast, improved on the final lap to go seventh, while Cook took his BTC Honda to eighth.

Cook was fastest in the early going before a red flag at the 20-minute mark, triggered by Hammerton spinning and stalling his Trade Price Cars Audi.

The second BMW of Tom Oliphant, on 30kg, was ninth, while championship leader Ash Sutton completed the top 10, his Laser Tools Racing Infiniti Q50 lugging the full 60kg of ballast.

Of the quartet of drivers making their first BTCC appearance of 2020, it was smooth-driving series debutante Jessica Hawkins who went quickest in her Power Maxed Racing Vauxhall Astra, one spot ahead of Clio Cup king Paul Rivett's Trade Price Audi.