The polesitter blasted away from the line and immediately covered off the inside line going into Copse corner to ward off any threat from the third-placed starter Ricky Collard in his WSR BMW 125i M Sport.

The latter's error allowed Andrew Jordan into third place in his WSR BMW and Jack Goff's Eurotech Honda Civic Type R into fourth ahead of Collard.

The top two remained the class of the field and were uninterrupted by a mid-race safety car to clear up the abandoned car of Josh Cook (Vauxhall Astra) from the Brooklands gravel.

Jordan was forced to pit after 11 laps with a loss of power from his two-litre turbocharged car just as Collard managed to repass Goff, which put him up to third.

Not for a lack of trying, Tom Chilton couldn't make a move stick and had to settle for second behind Tordoff and ahead of Collard and Goff respectively.

"This win has been a long time coming," said Tordoff, who returned to the BTCC this year after a year in sportscars after finishing second in the BTCC in 2016.

"I got a good start and I cut across in front of Ricky just in time.

"From there, it was about building a rhythm and controlling things, although I did make a slip-up just after the safety car and flirted with the gravel at Luffield.

"That put Tom right back on my tail and they got on the pits to car radio to tell me that there would be no team orders, I would have to work for this one. 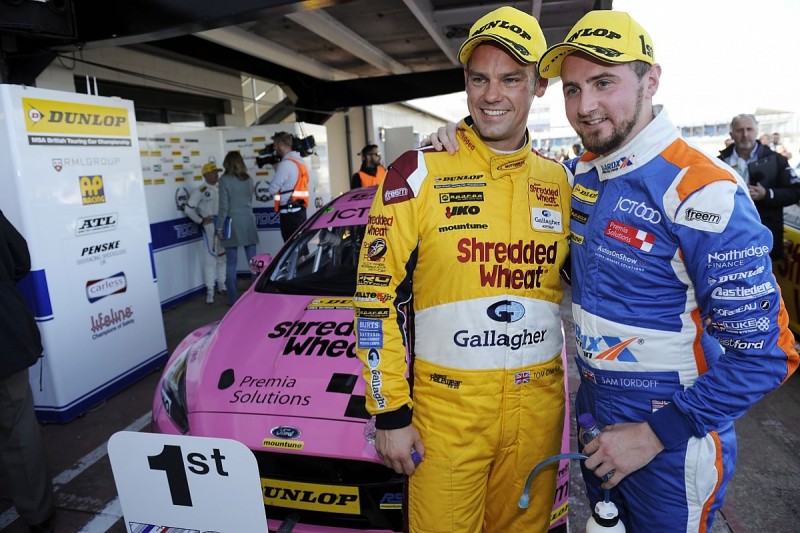 "But I held on and it was a perfect result for me and for the team."

Collard's third place came in only his third race in the BTCC, standing in for his injured father, BTCC regular Rob.

Championship leader Colin Turkington, who had only qualified in 18th place in his WSR BMW laden with 75kg of ballast, picked his way through the order and ran 12th after 10 laps.

He climbed through the lower ranks of the top 10 and eventually followed Mike Bushell's Team Hard VW CC home for eighth position at the flag.

He was well clear of championship rivals Ash Sutton, who was 11th in his Team BMR Subaru Levorg, and Tom Ingram, who was 15th in his Speedworks Motorsport Toyota Avensis.

That means that Turkington has extended his lead to 50 points in the standings with five races remaining.