Tom Ingram topped a chaotic wet qualifying for the British Touring Car Championship round at Croft, but is poised to lose pole position after apparently failing the post-session ride-height check.

Ingram took his Speedworks-run Corolla around 0.275 seconds faster than the BTC Racing Honda Civic Type R of next-quickest Josh Cook, but it was by no means the fastest lap recorded in the session.

A raft of track-limits offences, predominantly for running wide at the Jim Clark Esses which included title contender Dan Cammish, after he set the quickest time of the session only to be demoted to 16th place in his Team Dynamics-run Honda.

Surprise package Bobby Thompson also set a time good enough for the front row in his Trade Price Cars Audi S3 - and potentially pole should Ingram be excluded - only for that time to be deleted, pushing him down to seventh.

This came amid two red flags, both caused by offs for the Laser Tools Racing Infiniti Q50s.

The first came courtesy of Aiden Moffat, before championship leader Ash Sutton then locked up into Clervaux on his first flying lap after the restart and nosed into the barriers.

"It was an instant lock on the brakes - I couldn't do anything to stop it," said Sutton, who as a result of causing the red flag lost his best time, which would have classified him fourth.

To rub salt into Sutton's wounds, he had a lap deleted for track limits earlier in the session that would put him on the front row, or pole should Ingram be excluded. 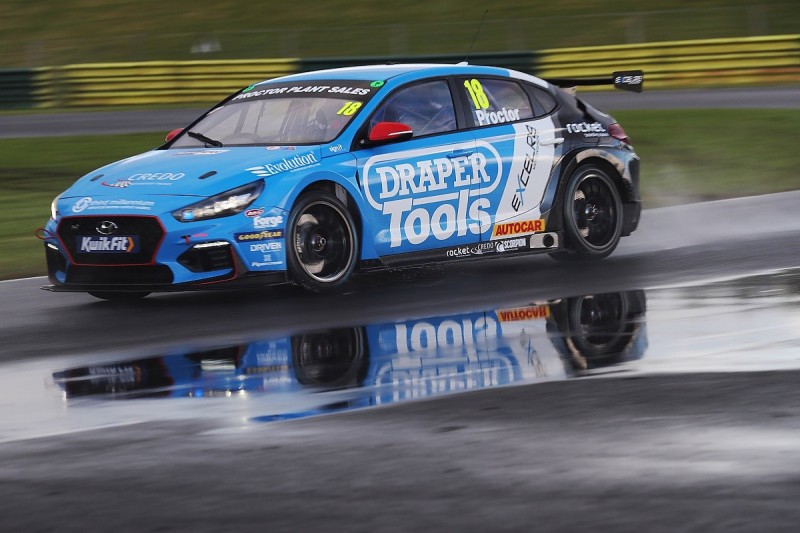 Senna Proctor was leading the way at the time of the two red-flag stoppages, having just pumped in a cracking lap in his Excelr8 Motorsport Hyundai i30, and ended the session third, but it appears that he, like Ingram, failed the post-session ride-height check.

Hill led the session early on, only for a left-front puncture to throw him into a wild trip across the gravel at Clervaux.

Fifth and sixth were the two West Surrey Racing-run BMW 330i M Sports of Colin Turkington and Tom Oliphant.

Turkington was quickest in both free practice sessions, but the inclement weather got rid of the rear-wheel-drive machines' traditional pace advantage on this circuit.

With all his time deletions, Sutton ended up eighth behind Thompson, while the Hondas of Tom Chilton and Matt Neal - run by BTC and Dynamics respectively - completed the top 10.

Apart from Cammish, another title contender to finish the session outside the leading contenders was Rory Butcher, who drove his Motorbase Performance Ford Focus to 12th.

Butcher's team-mate Ollie Jackson was another to lose a quick time, which could have put him on the front row if Ingram is thrown out.