Ash Sutton has become British Touring Car champion for a third time with one race to spare at the 2021 season finale at Brands Hatch.

Sutton put in a measured drive to sixth place at the wheel of his Laser Tools Racing Infiniti Q50 in a race led from start to finish by Josh Cook.

For Cook it was the second win of the day in his BTC Racing Honda Civic Type R, which was on the full 75kg of success ballast thanks to its victory in the opening race.

Proctor hung on around the outside and even inched ahead of Cook on the run up the hill to Druids, before locking up and nosing into the barriers at the Druids hairpin.

Meanwhile, Dan Lloyd got his Power Maxed Racing Vauxhall Astra down the inside of Shedden at Graham Hill Bend to take second position.

Round at Surtees, Ollie Jackson was pitched into a slide at Surtees by Tom Chilton, entered the corner sideways, and was then clipped by Tom Oliphant before being collected by Adam Morgan – all except Chilton were out, and the safety car made its first appearance of the race.

Cars were still in the firing line and marshals on the track when the race resumed, which appeared to catch some teams out, so that Cook, Lloyd and Shedden had a large advantage over fourth-placed Dan Rowbottom upon resumption. 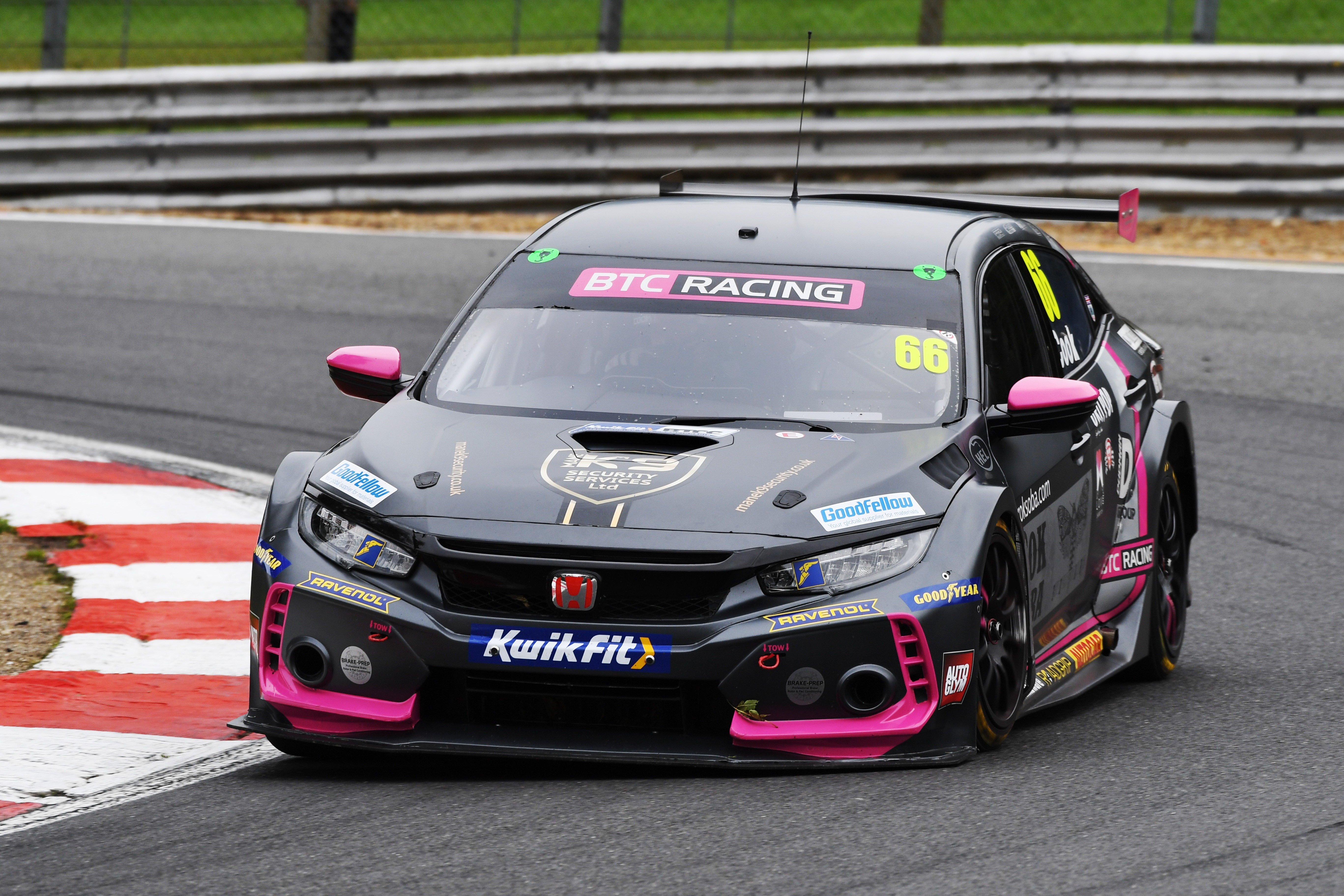 Cook drive serenely to take his second win on the bounce

Rowbottom set fastest lap in his Dynamics Honda as he closed the gap, and brought title contender Colin Turkington’s West Surrey Racing-run BMW 330i M Sport and Sutton with him, so the top six were in close proximity.

Turkington had to outscore Sutton by 11 points in this race to take the fight to the finale, and he made the only pass from then on among the top six, overtaking Rowbottom into Druids on the 11th lap.

Another safety car, thanks to Nicolas Hamilton spinning into the gravel at Westfield, bunched up the field again and left a three-lap sprint to the flag.

Rory Butcher was a spectacular seventh in his Speedworks Motorsport-run Toyota Corolla via a grassy manoeuvre on Aiden Moffat into Druids that filled his radiator with grass.

Moffat sustained a puncture in that incident, and was pitched into a spin that hit Chris Smiley at Graham Hill Bend. 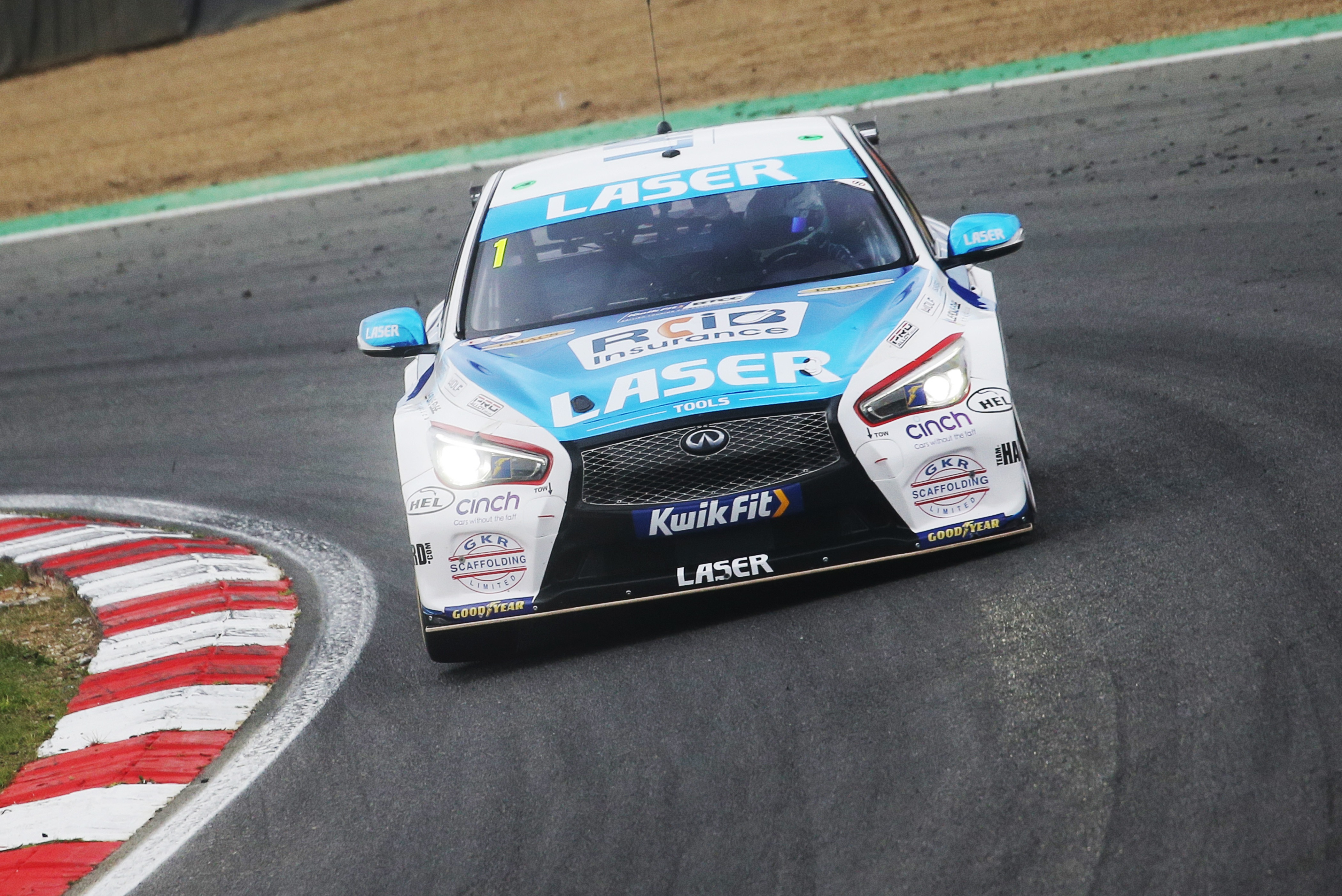 Hill had recovered from being knocked wide at Druids on the opening lap, while Ingram fought back to 12th after his Excelr8 Motorsport Hyundai i30 N was forced further and further wide in the first-lap Surtees clash as he avoided spinners, crashers and recovering cars.

But it wasn’t enough for either of them to feature in the reversed-grid equation, with habitual end-of-day polesitter Jelley drawn at the front.

It means that Cook has leapfrogged both Ingram and Hill for third in the standings, and he is 14 points adrift of second-placed Turkington.

As well as clinching the overall title, Sutton wrapped up the Independent drivers’ crown, with Laser Tools Racing claiming the outright teams’ award.