British Touring Car Championship title contender Rory Butcher believes that his three top-six finishes at Thruxton have put him in a good position for the final run-in to the crown.

The Scot bagged sixth, fifth and third from the Hampshire circuit in his Motorbase Performance Ford Focus ST on what had initially looked to be the car's least competitive weekend of the season.

The results leave Butcher, who is fourth in the championship, 34 points off series leader Ash Sutton, 18 adrift of runner-up Colin Turkington and two behind third-placed Tom Ingram.

This weekend's venue, Silverstone, has always been Ford territory; Butcher comfortably topped the July tyre test at Snetterton, scene of the late-October round; and Butcher and the Ford were the fastest combination in August on the Grand Prix Circuit at Brands Hatch, with the Indy layout hosting the final round in November.

Butcher struggled in free practice at Thruxton - he was over one second off the pace on the new fourth-generation Focus's first outing at the track, and its first run on the hard-compound Goodyear control tyres that are mandatory at the high-speed circuit.

But he made a big step forward in qualifying to take sixth on the grid, just 0.4s off the pole time.

"We'd never run the car on the hard tyre and we'd never been to Thruxton, so it was a big learning curve for us," Butcher told Autosport.

"For qualifying we made quite a significant change to the car and it transformed it - it gave me a lot more confidence in the high speed and I could fight for it. 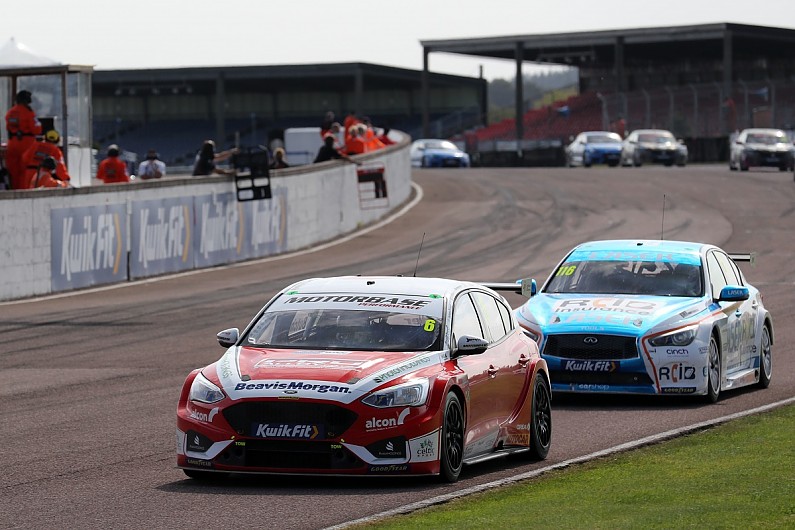 "We had a different car in both free practice sessions, and coming into qualifying I was adapting to the new feeling."

That set up Butcher for his race-day run, where consistent finishes kept him in the title hunt.

The podium came after clinging on to the position despite a race-long attack from Sutton.

"I didn't really have the car underneath me, and I was definitely starting to fade, but I decided he wasn't getting past," said Butcher.

"We definitely were behind the curve, but what looked like a tough weekend ended up a high points-scoring weekend - to come away with a sixth, a fifth and then a podium is unbelievable.

"On our bad days we're still scoring points, and that's a testament to how good the car is."

Although Butcher has lost third spot in the points to Ingram, that reduces his success ballast from 48kg to 42kg for Silverstone.

"We'll look at what we think Silverstone will need, and we'll roll out of the box and hopefully be closer to the sharp end," said Butcher.

Neate excluded from entire Thruxton round 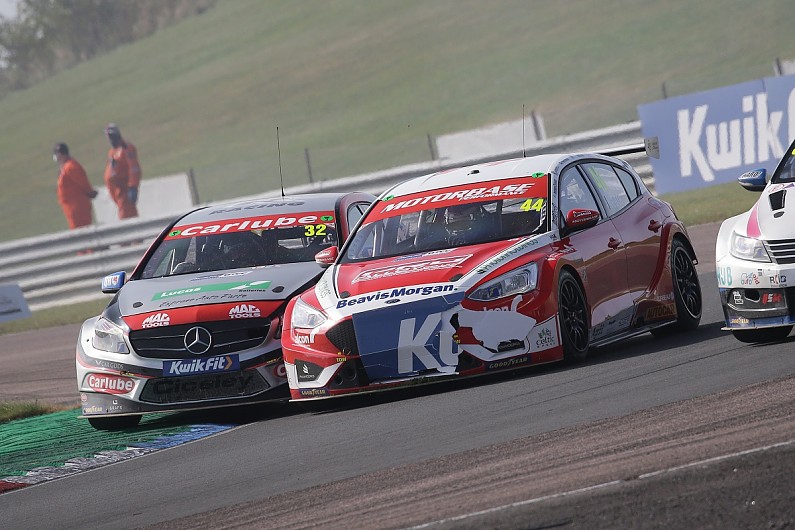 Butcher's Motorbase Ford team-mate Andy Neate was in hot water at Thruxton, when he was excluded from the entire race meeting.

Neate pitted in the first race after collecting a banner across the front of his Focus in an early incident, and rejoined a lap down.

When Carl Boardley subsequently got out of shape at the Complex, Neate hit the Team Hard BMW, for which he was initially reprimanded and endorsed two points on his licence.

While Neate subsequently drove in the other two races, BTCC officials looked into further evidence - understood to be onboard footage and his radio - and expunged him from the day's results.

A series statement said: "Andy Neate was disqualified from the race meeting for an act prejudicial to the interests of motorsport generally in making a threat of physical assault by the use of his car to make deliberate contact with another competitor."