Dan Cammish has been handed a time penalty for a safety car infringement but keeps his win in the first British Touring Car Championship race at Brands Hatch.

Slick-shod Cammish led team-mate Matt Neal, who gambled on a mid-race swap to wet tyres, for a surprise Team Dynamics Honda one-two in a rain-hit opener to the season finale on the Grand Prix circuit.

But Cammish has had five seconds added to his race time for overlapping with Tom Oliphant at the safety car line but was 7.882 seconds clear of second-placed Neal so does not lose his victory.

Barry Plowman, the co-owner and technical director of Team Dynamics, told Autosport: "There was nothing that Dan could have done differently."

The race was neutralised when Matt Simpson shunted his Honda Civic Type R into the tyre wall at the top of Paddock Hill Band.

Drivers can race up to the safety car line on the main straight before falling into formation.

Cammish was adjudged to be out of position alongside the BMW 330i M Sport of Oliphant in their battle for sixth place.

"It happened just as the cars were getting ready to take the restart," Plowman added.

"Oliphant [in front] went wide at Clearways and was losing the car, so Dan moved right over the track because he was sure that Oliphant was going to go off.

"He got on the brakes, and there was a slight overlap.

"We have seen Oliphant's onboard [videos] and he was on the [steering] lock-stops." 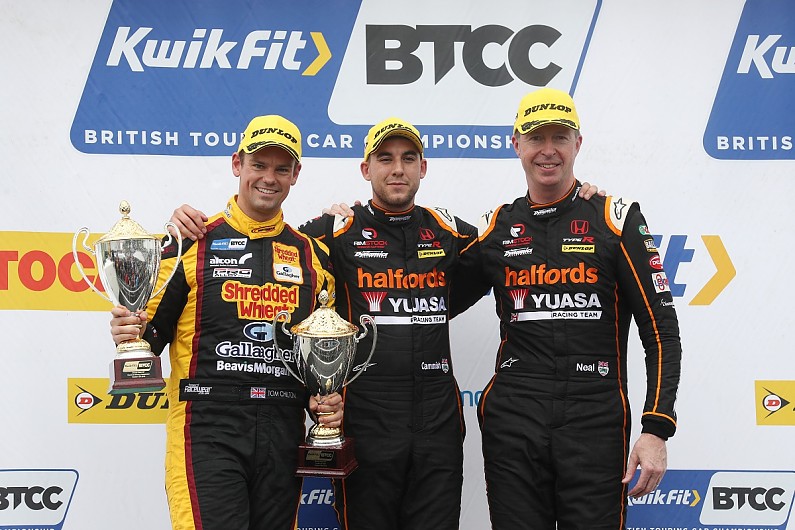 In the previous round at Silverstone, Cammish was reprimanded for the same indiscretion in race two.

He made contact twice under safety car conditions with Andrew Jordan having crossed the line side-by-side.

A delay to the timing screens meant he continued to contest the position with the WSR driver, with the latter ruled to be ahead.

For that incident, Cammish was handed a £1500 fine and his licence was endorsed with three penalty points - but he received no time penalty.

Cammish's Brands victory closed him to within just eight points of championship leader Colin Turkington ahead of the final two races.

The Dynamics Honda will start race two from pole with the maximum 54kg of success ballast.