Ashley Sutton secured a surprise pole position for the opening round of the 2019 British Touring Car Championship, beating former team-mate Jason Plato in an incident-packed qualifying at Brands Hatch.

Ahead of the first round, all 30 cars were running without success ballast, but greasy conditions disguised the true competitive order as everyone resorted to wet tyres.

Although the Indy circuit has traditionally favoured front-wheel-drive cars, and the Subaru Levorg GT has in particular struggled for pace, Sutton set the early benchmark.

The 2017 champion was the first driver to drop under 54 seconds, initially taking Team BMR top and ahead of the Honda Civic Type Rs of Matt Neal and Sam Tordoff.

However, free practice pacesetter Tom Oliphant improved to take his WSR BMW 330i M Sport clear over Neal's team-mate Dan Cammish before the session was stopped.

Motorbase's Ollie Jackson brought out the first of three red flags in the half-hour session as he guided his Ford Focus RS into the gravel at Clearways.

The wet conditions and the Levorg's low centre of gravity meant he was able to overcome its power deficit at the bogie venue.

The new-for-2019 wet tyres, estimated to be a second a lap faster, began to wear and that left Sutton unmatched.

He pitted for a fresh set of rubber and found another tenth, working down to a 53.602s lap.

Sutton then set the fastest first sector but had to abort his lap when Tordoff locked up under braking and beached his AmD Tuning Civic in the gravel at Druids. 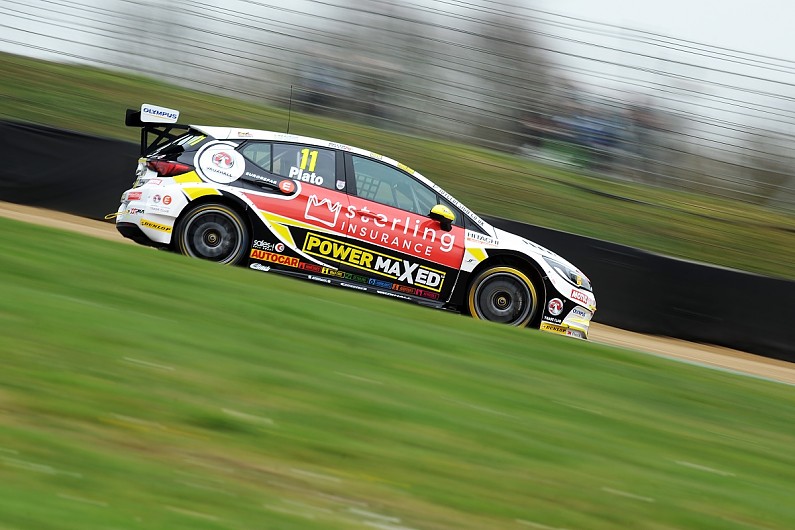 The session restarted with 11 minutes remaining, as former Team BMR driver Plato ran 11th. But on his return to Vauxhall, the marque with which he won the 2001 series crown, he climbed to second place on a 53.769s.

As the final six minutes of qualifying played out, only Neal could improve his time.

That meant Sutton secured his fifth BTCC pole position while Plato returned to the front row for the first time since Croft last season.

Reigning champion Colin Turkington improved to beat his WSR team-mates Andrew Jordan and Oliphant for a BMW 3-4-5, ahead of Neal and Cammish.

Tom Ingram returned eighth place for the brand new Toyota Corolla, beating Tordoff - who, having caused the red flag, had his position set by his second fastest lap.

BTC Racing's Josh Cook was forced to sit out the final minutes of the session, following a truncated FP2 during which his FK8 Civic required a wiring loom change, but he held onto 10th.

Plato and Sutton's team-mates, Rob Collard and Senna Proctor, were 16th and 17th.

Blundell beat Carl Broadley to end the session 28th in his Audi S3.

Stephen Jelley had ended the session in eighth, but his Team Parker Racing car was ruled to have failed ride height checks. He was disqualified from the results, meaning he will start the race last in 30th.