The 2013 British Touring Car Championship will go down to the final race at Brands Hatch after Jason Plato took victory and Andrew Jordan recorded his first retirement of the season.

Plato's Triple Eight MG made a great start in the wet and led from start to finish, but there was chaos behind.

First, title contender Gordon Shedden's Honda Civic had a huge slide at the first corner. Somehow everyone missed him, but it dropped the reigning champ into the middle of the pack.

On lap two, Jordan attacked Rob Collard for fifth at Paddock. There was contact, but Jordan backed out of it, allowing Collard to retain the position and Matt Neal (Honda Civic) to close on both.

Aron Smith's Motorbase Ford Focus got a great run on all of them, getting ahead of both Hondas.

Smith then clashed with Collard at Surtees and as Jordan tried to avoid the spinning BMW he and Neal touched, breaking the left-rear suspension of Jordan's Eurotech machine.

He made it as far as Hawthorns before spinning and eventually retiring, his first non-score of 2013.

Neal made it back to the pits, but would end his race on fire. That means he is now out of the title hunt.

Up at the front, Plato led Sam Tordoff to an MG one-two in the wet, while Mat Jackson overtook Motorbase team-mate Tom Onslow-Cole early on and drove off into a race of his own to complete the podium.

Adam Morgan's Toyota Avensis briefly got up to fourth, but a mistake at Paddock dropped him back and eventually Dave Newsham's similar machine came through to secure the position after a fine drive. 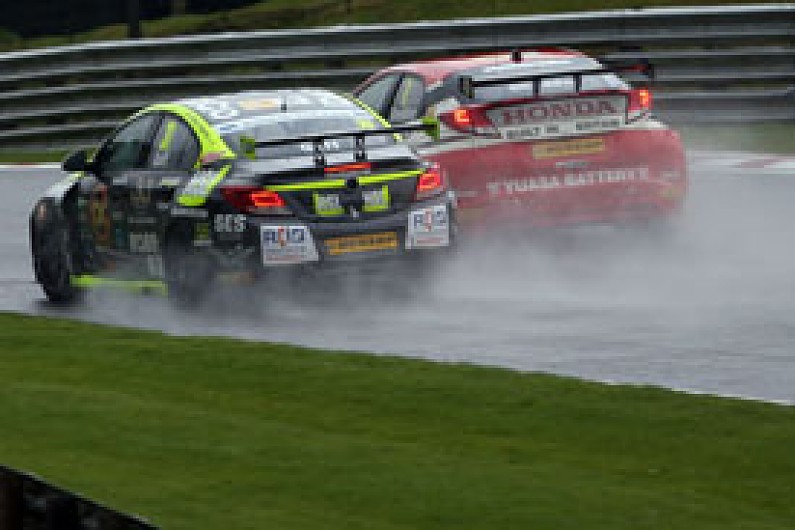 Smith was fifth, ahead of an impressive Jack Goff. The Team Hard Vauxhall Insignia driver battled with a recovering Shedden before pulling clear in the later stages to finish sixth.

With 22 points on offer in the final race, Jordan still leads Plato by 15 points, but will have to start the finale from the back.

An eighth place would secure the Eurotech Honda driver the title, irrespective of where Plato finishes.

Reigning champion Shedden is 20 points behind Jordan, so also remains in mathematical contention and will start the finale from pole, but Neal and Colin Turkington are now out of the running for the crown.