The Kobe driver's qualifying effort was compromised by missing a window of optimum track conditions when a storm disrupted the session on Friday.

But in a repeat of his rocket getaway at Paul Ricard a fortnight ago, Sato produced a masterly start to rise to fourth by Turn 1 away from the lights.

Thereafter a combination of assertive overtaking moves and a late pitstop strategy moved Sato into the lead. What appeared a spectacle of limited appeal as the final three laps were wound down was brought alive by the Japanese driver's heavy front tyre wear.

Early leader, and home favourite, Tamas Pal Kiss closed to within 1.2s at the chequered flag, while Andrea Roda picked up his maiden podium for Virtuosi UK.

Polesitter Markus Pommer had achieved Super Nova's fourth consecutive fastest qualifying time at the Hungaroring, but the German was beaten off the line by home favourite Kiss, and slotted into second at the conclusion of lap one.

Sato moved into third on lap seven by diving down Dejonghe's inside at Turn 2. The Belgian immediately opted to pit for fresh fronts on the following tour.

Campos GP2 driver Sato continued his charge, and three laps later had reached the gearbox of Pommer. The German held Sato at bay for just a lap before yielding second position at Turn 1.

Faced with a 3.5s deficit to Kiss, Sato immediately recorded a time of 1m34.8s in his first lap in clean air. In comparison, the leader could only circulate in the 1m36.3s.

Suffering from high tyre degradation, Kiss and Pommer pitted together from first and third on lap 13. While the Zele Racing crew turned Kiss around swiftly, Pommer suffered a troubled stop and would rejoin in sixth. 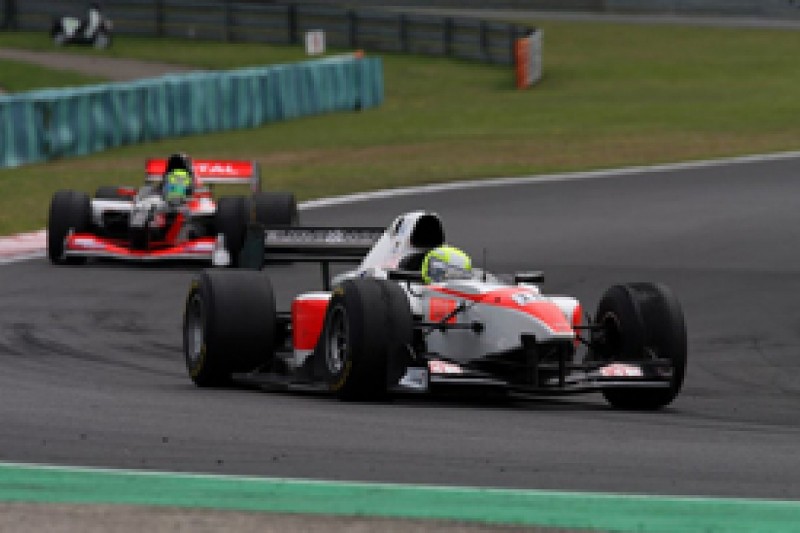 Virtuosi's Andrea Roda came in from second for his mandatory stop on the following tour, leaving Sato as the only man not to have changed tyres.

Sato would eventually stop three laps from home, and left the pits as Kiss rounded the final corner. Heavy front tyre wear on Sato's Euronova machine would set up an enthralling final two laps, as Kiss closed in.

The Italian had struggled with massive oversteer in practice on his Eurotech Engineering entry, but having started 10th, Giovesi grabbed fourth from Dejonghe into Turn 1 on lap 16.

Markus Pommer finished sixth on the road but was later given a 35s penalty after a troubled pitstop in which the left-rear wheel of the Super Nova car ended up in the fast lane of the pits after the clutch was released with the wheel unfastened.