I love Birmingham and am so glad to be going back again. This is the biggest and the best show in the world.

I came a few years ago for the first time just to talk on the Autosport Stage and I saw a little bit of what was going on in the Live Action Arena. Straight away, I knew I wanted to do more. Last year was unbelievable what we did with so many fans - I want to do that again this week.

Honestly, it's hard to explain what I do because so much of it comes naturally to me and I do it on instinct.

I can do these kinds of things with any kind of car as long as it's got some power and it's rear-wheel drive or four-wheel drive.

I enjoy doing these things as long as the people outside of the car are enjoying themselves as well. You get a good kick from the fans and they make a real connection with the person inside the car.

Depending on the size of the jump we have in Birmingham, we might have to run the car in asphalt or gravel specification.

If it's just a small jump, we'll be fine to run the car low without much suspension travel.

If it's a bigger jump, we really need to get more travel from the dampers and less chance for the bottom of the car to be crashing out when we land.

When I land the car, obviously I need to be able to put the steering input there immediately, so we can make the turn and carry on with the next trick in the show.

When you're coming up the ramp to the jump, the speed has to be exactly right, and as you take off it's really important to be on the throttle to keep the car straight. If you lift off at the wrong moment, you'll land the car on the nose.

Normally, if it's a big jump with quite a lot of time in the air then I'll change down a gear while I'm in the air - this gives you the acceleration on landing, which you need because you've slowed down so much while you're flying. 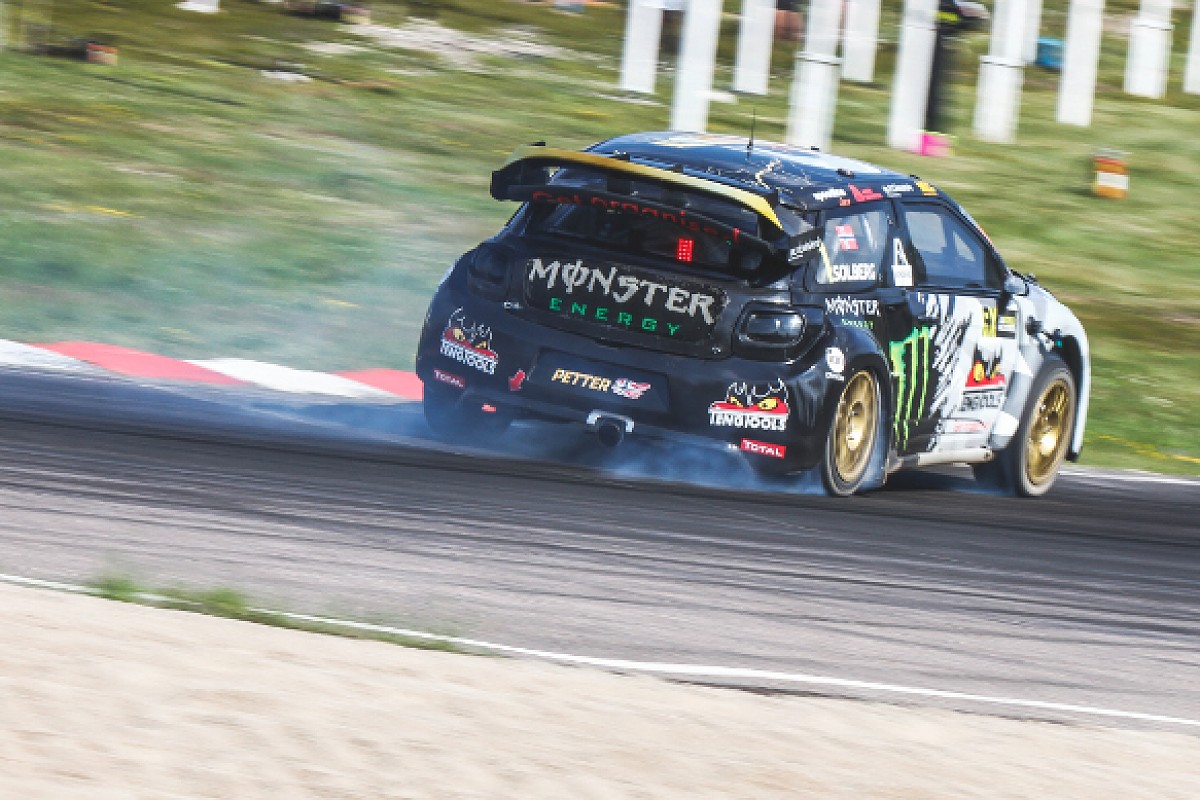 The first trick that most people are going to see from me is the powerslide.

I was coming in very fast, everything was perfect and I was drifting really nicely. I had done this just before and just touched the wall with the rear - it was fantastic, I honestly just kissed the wall and went away.

The next time I was a tiny, tiny bit faster and I got to the dirt - the bits of rubber and marbles which are left outside of the line the guys are normally driving on. I hit that and the car just took off. Bang, straight into the wall.

The impact smashed a corner of the car - that meant a new upright, driveshaft, brake disc and caliper. That mistake cost me €30,000. But, you know me, when I do the show I like to do it properly!

In Birmingham, the surface we drive on is really slippery; more like ice, except probably even more slippery - you can actually get some grip on some kinds of ice. But there's no grip in the NEC.

Some people think that makes it easier to spin the car and, I guess, it does make it easier to just do a straightforward handbrake turn. But when you have so little grip, you really have to work the car and yourself much, much harder.

All the time you're on a very fine line, right at the edge of the friction circle. If you push too hard, this place will bite you in the ass.

But there's sometimes a little more grip as the show goes on. When we go into the hall for the first time the floor is clean, but we get some rubber down and it gets a bit more grip. Not much more though... 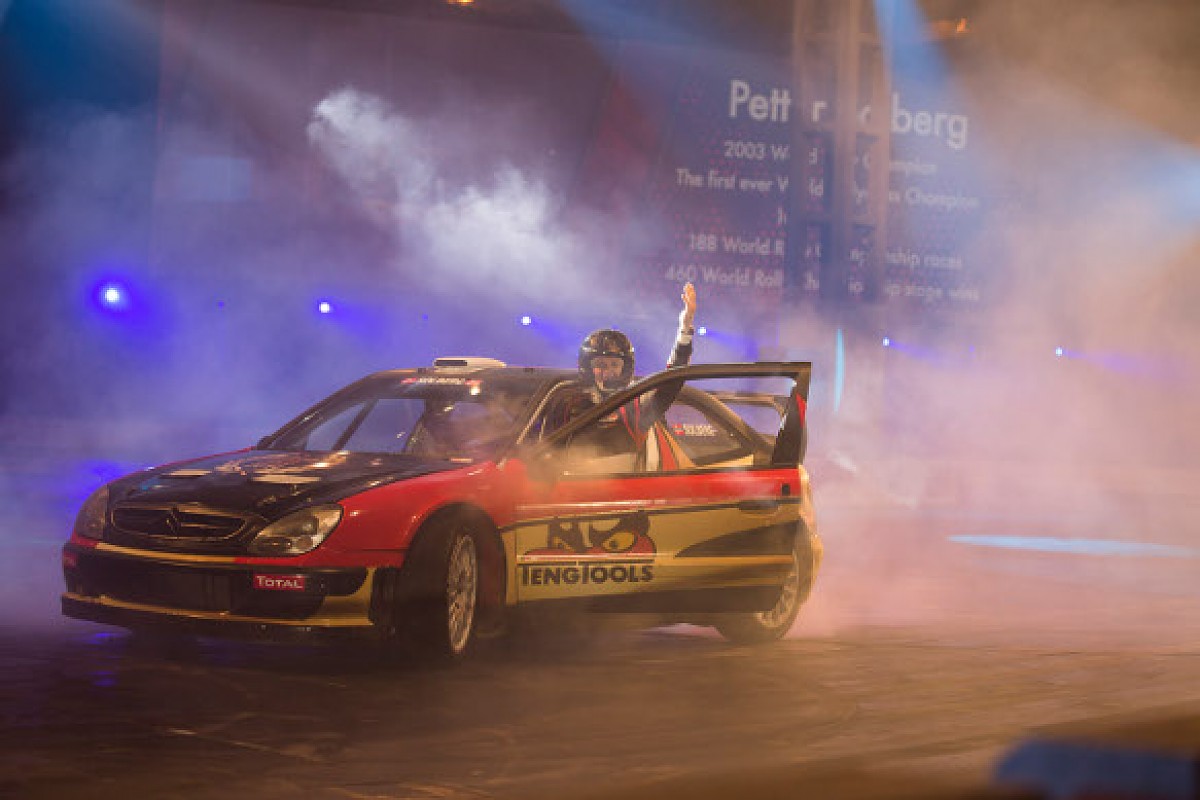 Depending on how much space we have and how much speed the car is carrying, you may or may not use the handbrake. When I'm coming off the startline and carrying some good speed into the arena, I can just throw the car into a slide and then control it on the throttle - but you do need some speed to do this.

It's like in rallying - if you have an open corner which is tightening then it's easy to control the slide and keep the nose in at the apex, even when the rear of the car is sliding very wide.

For a tighter doughnut, it's a quick grab of the handbrake to lock the rear wheels, immediately lots of throttle and steering input - quite violent - but after that you don't need the steering.

You keep the car spinning in the perfect circle with the throttle. Once the wheels are spinning and smoking, then it's easier to work with the car.

GETTING OUT OF THE CAR

You know that I like to put on a show for everybody - I always want to make sure everybody is having a good time.

A good way for me to do this is to get out of the car to wave to people as I'm driving along. I've done this for a long time now - but since I've been doing more of these demonstration-type events and rallycross, I've been doing it a bit more.

And now I've started doing doughnuts while sitting out of the car. This is really fun!

It's not easy, though. I have to start spinning the car while I'm in the seat like normal. Then it's really carefully onto the side of the seat and finally out onto the rollcage.

At the same time, I have to open the door with the left hand, steer with the right; get my left leg on the door bar and my right leg stretched across on the throttle - it's not easy!

You have to be careful. Some of you might remember the Bologna Motor Show a few years ago, when things didn't go exactly to plan...

I'd done this a few times, getting out of the car and onto the roof.

I did it this time, but didn't realise that when I was getting out of the car my knee had hit the paddleshift and I took second gear. Then, when I got onto the roof the speed increased and the door shut!

I had to jump down from the roof, but the speed was something like 45km/h and I fell. I broke my hand and really hurt my ass. That was a big f***-up, but I think some people thought it was part of the show!

Even with a broken hand, I continued to drive for 10 minutes after that - but it hurt a lot! 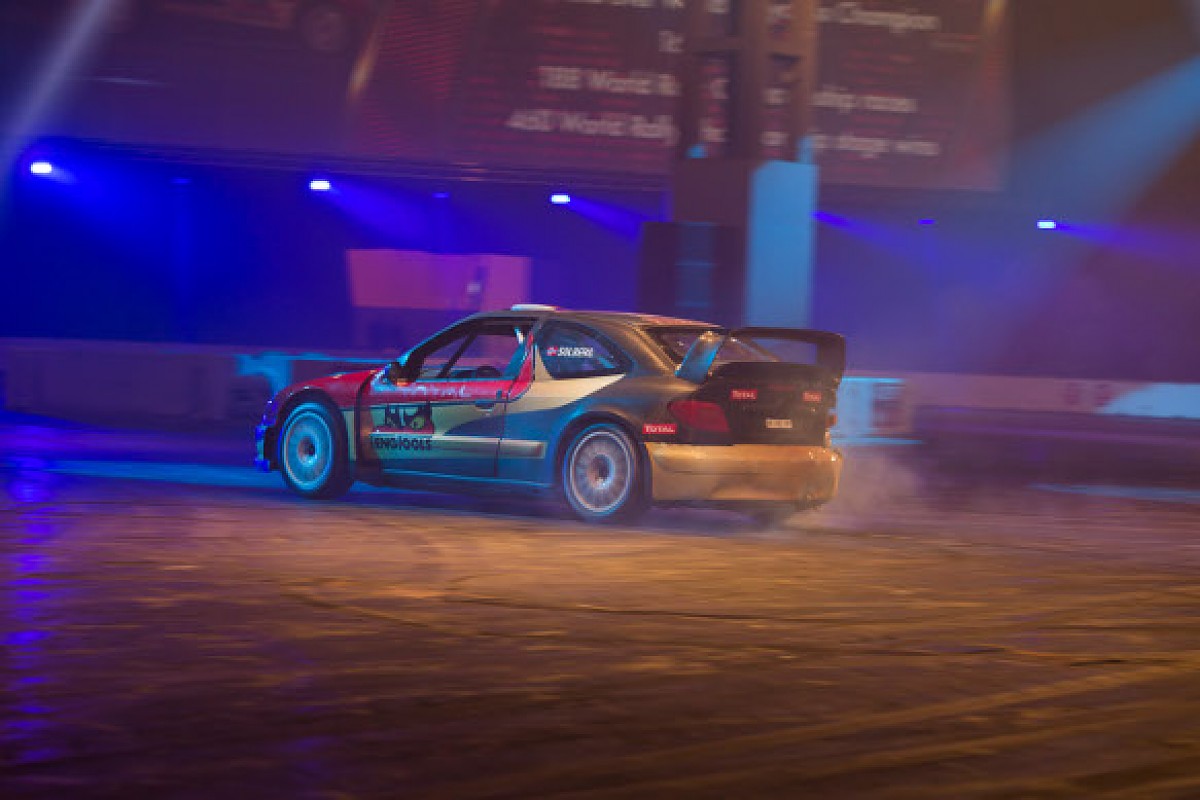 This is a tricky one in the arena in Birmingham, as usually it requires much more space.

I normally like to take more speed, because it makes the spin a bit more dramatic. I'll go flat-out through the gears going forward, then pull the handbrake at around 120 or 130km/h (75mph). This spins the car through 180 degrees and then we're doing that speed backwards.

While I'm going backwards, I change down the gears and drop the clutch to spin the wheels and pull forwards out of the spin.

Normally I'll take the asphalt tyre for Birmingham. There's not much grip here, but once you get some heat into the softest compound then you do get something.

The choice of tyre for this year does depend a little bit on the jump. Maybe we'll need the gravel suspension on the car; if we do, then we'll take the gravel tyre.

If we're on the gravel tyre, everything is just that little bit slower, the reaction from the tyre's not quite the same and there's more movement from the car. Everything is a little bit less precise.

For the rest of the car, it's the same. The differentials are all like we'd use on a rally and the engine's the same - except it has a bit more power.

What we need from the engine at an event like this is immediate response, so the anti-lag system is turned to the most aggressive.

This is good, though - this means there's lots of noise, lots of popping and banging, which all adds to the action.

STANDING ON THE SIDE OF THE CAR 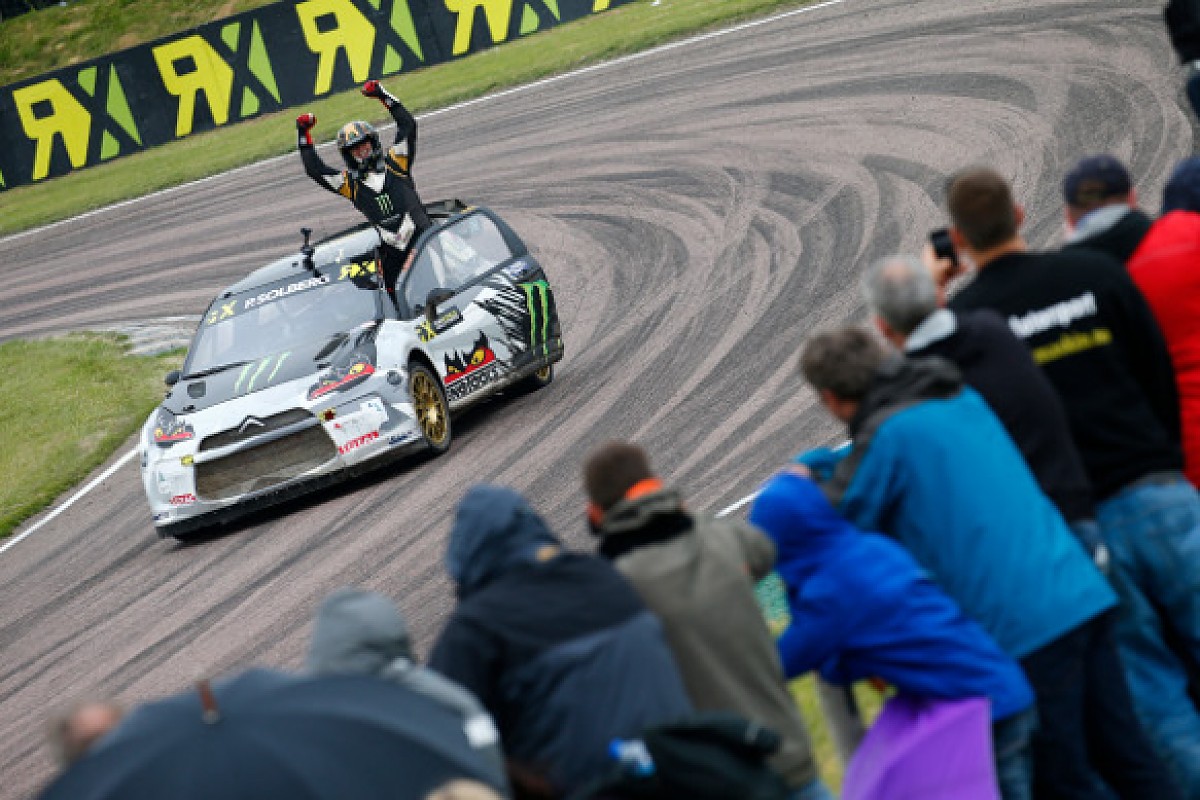 I only did this once with Terry Grant and I have to say it was a bit stupid! It was so risky - even I say this was a bit too crazy. I really don't think I'll be doing this one again, it was a bit too much on the limit.

But, you know, Terry is a good guy and a really good driver - we work very well together and I trust him. But it only needed the car to move a little and it would have gone wrong quite badly.

This is actually one of the most difficult things to do.

As you can imagine I'm strapped into the car as usual, and with the HANS device on you can't turn your head at all. The rear-view mirror and the wing mirrors are really useless because it's so dark in the arena.

When I've done a 180 and I'm sliding backwards - usually with the wheels spinning forwards - I can't see anything at all. It's really important to have some reference points in the arena so I know when I really have to stop going backwards! 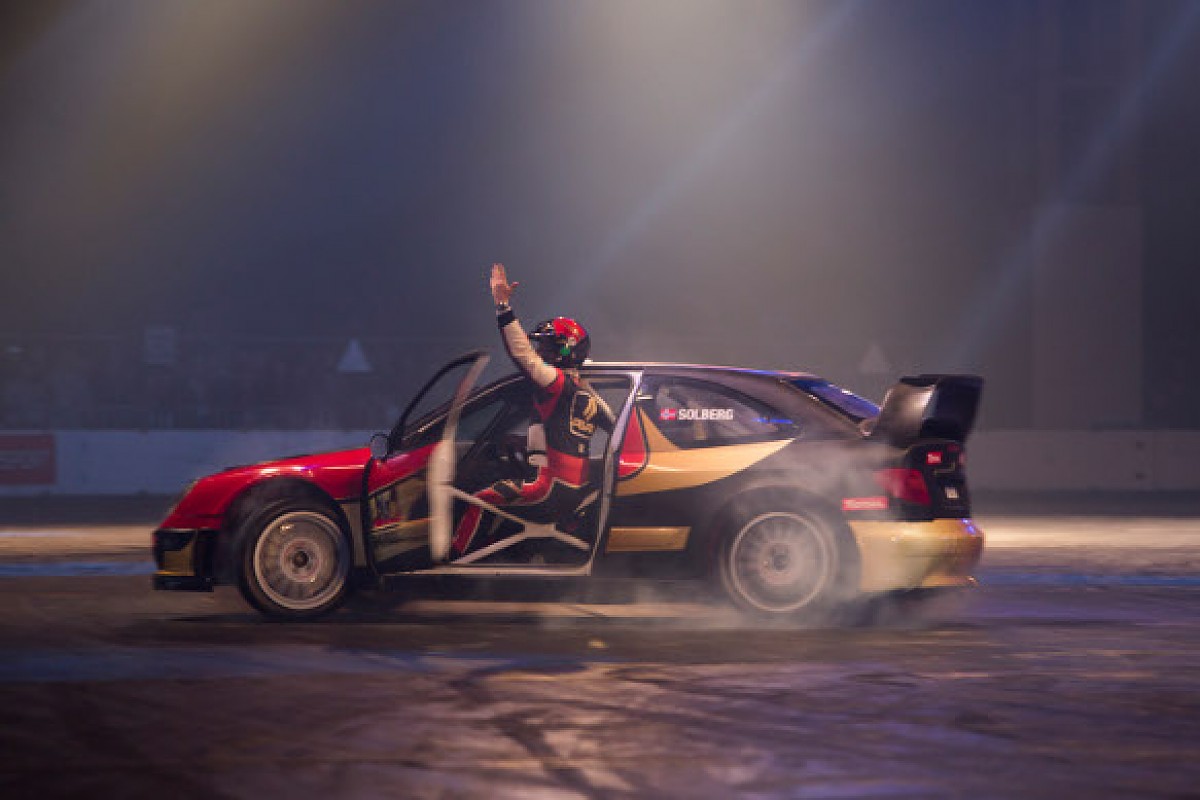 We have some new stuff this year, but a lot of what I'm going to do depends on what space we have and what comes into the mind straight away.

We make a plan with Malcolm [Forbes, Live Action manager], so I know what time I'm coming in and what I'm going to be doing, but there's always the chance for something a little bit different.