Yvan Muller reclaimed the World Touring Car Cup points lead with victory in Saturday's opening race, which featured a stoppage of more than two hours after a huge first-lap crash

Muller made a dreadful start on the initial getaway, but was the first car in the queue when the race restarted behind a safety car and controlled proceedings thereafter.

The race had been halted for car recovery and track repairs after a crash on the opening lap, which was triggered by polesitter Rob Huff and team-mate Mehdi Bennani making contact through the fast Turn 3 right-hander.

Norbert Michelisz had returned to the grid having survived a hit in that crash, but his BRC Racing Hyundai i30 N was not allowed to take the restart and was instead returned to the pits, giving Muller clear track when racing resumed at the end of lap four.

The four-time world champion was matched in the opening laps by Esteban Guerrieri - whose Munnich Motorsport outfit had worked throughout the stoppage to repair his Honda Civic in time for the restart - with Gabriele Tarquini in tow in third in the sole surviving BRC Hyundai.

But Muller gradually eked out an advantage and was never troubled by Guerrieri, with both opting to serve their joker laps at the end of lap eight.

Muller clinched his second win of the season by a little more than two seconds, reclaiming the points lead in the process as a result of nephew Yann Ehrlacher being eliminated in the first lap crash. 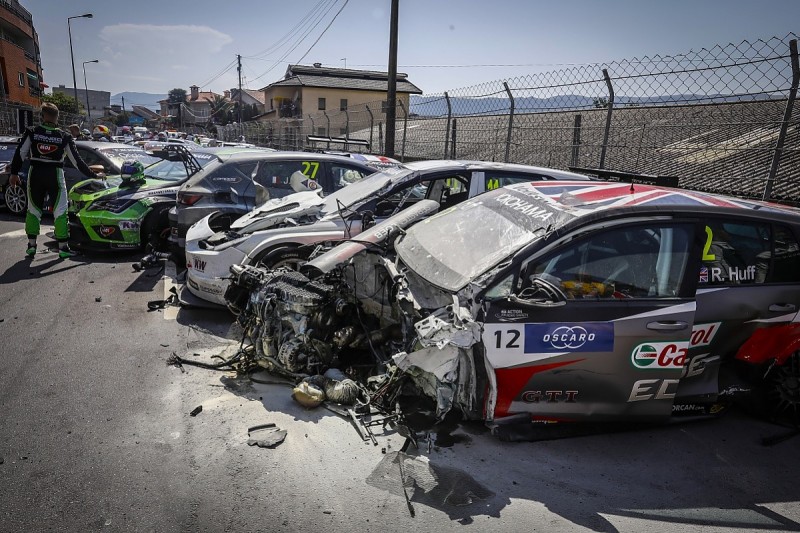 Tarquini had pressed Guerrieri in the closing stages, but suffered a left-front puncture on the final lap and dropped to fourth, ceding the final podium position to Pepe Oriola approaching the final corner.

Oriola had earlier completed a vital overtake on Jean-Karl Vernay - who had taken the initial start from the pitlane after crashing at the end of qualifying - by squeezing his Campos Racing Cupra past Vernay on the run off the second corner after Vernay had served his joker.

Vernay still finished a comfortable fifth behind Tarquini, while Aurelien Comte claimed sixth in his Peugeot 308TCR from Benjamin Lessennes in the closing stages.

Fabrizio Giovanardi finished 11th - recording the Team Mulsanne Alfa Romeo outfit's best finish so far in 2018 - but he was placed under investigation during the race for crossing the blue joker lap line in his Giulietta.