Yvan Muller scored his second pole position of the World Touring Car Cup season at Sochi as his nephew Yann Ehrlacher took another step closer to successfully defending his title.

Four-time World Touring Car Champion Muller proved fastest in the opening Q1 session in Russia, left it late to set a time in Q2 to reach Q3 and then topped the shootout in tricky rain-affected conditions that left drivers second-guessing on tyre choice.

Full-wet Goodyears all round ended up being the best choice, which almost caught Muller out in Q2 when he made his first run with slicks on the front and treaded tyres on the rear. But a rapid change by his Cyan Racing Lynk & Co team allowed him to make the cut and set up his run to pole position.

“It was a big lap,” said a delighted Muller ahead of the final two races of the year.

“An amazing qualifying. I was quick in Q1, by my first effort in Q2 was not good enough and I had to come in to change tyres and just make it into Q3.

“We made a set-up change and did a good lap, so well done to the boys.”

Spaniard Mikel Azcona was next to run after Muller in Q3 and looked set to threaten his benchmark, but fell short by 0.348s to go second. 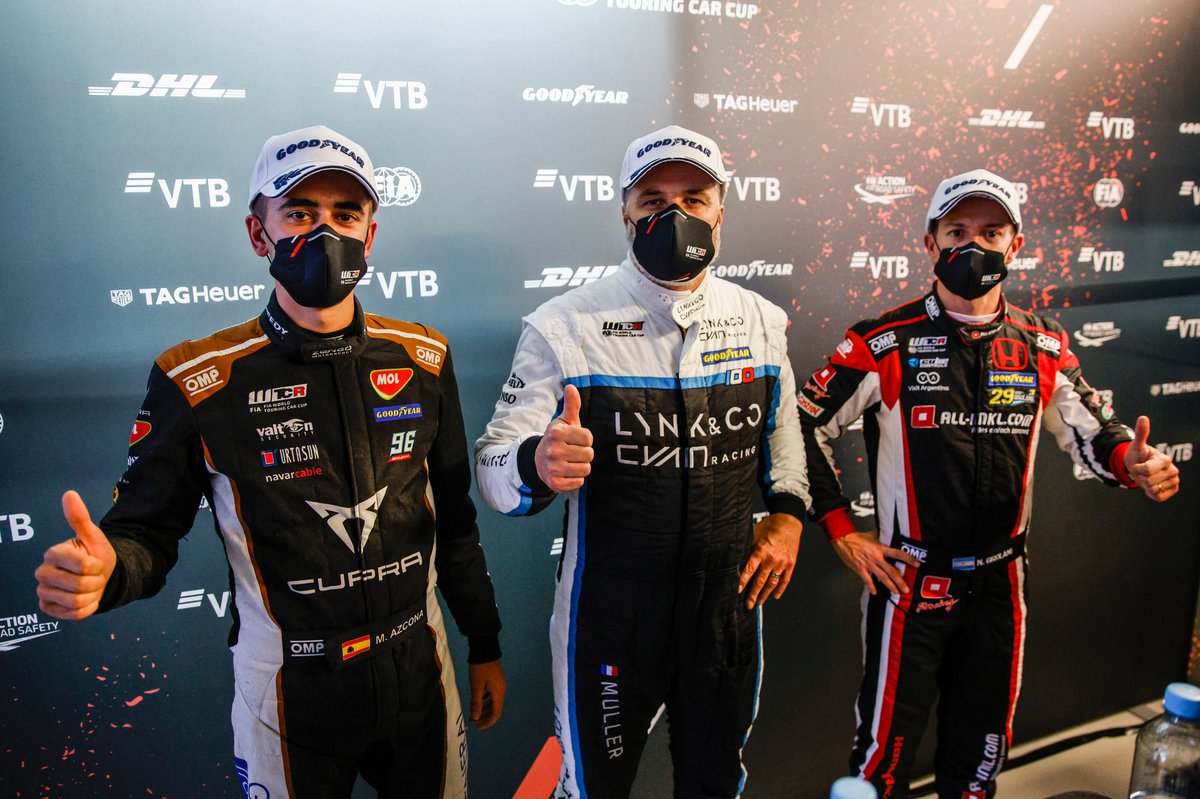 Ehrlacher qualified fastest in Q2, then chose to run first in Q3 as further rain threatened but never materialised. His conservative lap left him fifth, but still satisfied with his day’s work as he added a point to his advantage over closest rival Frederic Vervisch, who could only qualify his Audi ninth.

Ehrlacher now leads the Belgian by 37 points ahead of the two races on Sunday.

“It started raining after Q2 when I had done a mega lap that didn’t count for points,” said the reigning champion, regarding his decision to run first in the shootout.

“The main thing was getting into Q3. Now we are well placed, not to win but to score good points in both races. We have to be spot on tomorrow.”

Vervisch will at least start the partially reversed-grid race one from the front row alongside team-mate and countryman Gilles Magnus, who banked a late lap in Q2 to qualify tenth and secure pole position for the opener.

Away from the title battle, there was disappointment for Gabriele Tarquini in his final WTCR appearance before his retirement. The 59-year-old failed to progress beyond Q1 and was only 16th fastest in his BRC Hyundai Elantra N TCR.

“It was not the qualification I wanted to do for my last one,” said the 2018 champion.

“I tried to do my best, but in these conditions I was not fast. With the compensation weight we have we are struggling, but I can do better than this. I was far away from Q2.”