Norbert Michelisz moved closer to claiming the World Touring Car Cup by winning a wild opening race at Sepang, though his main rivals fought their way into the top six

The Hyundai driver was barely featured on-screen in the race broadcast, but he cruised to a comfortable fifth victory of the season in changeable conditions to move more than a race win's worth of points clear of nearest rival Esteban Guerrieri.

Light rain as the cars headed to the grid gave teams a headache over which tyres to fit, particularly when that intensified, though most, including polesitter Michelisz, opted for a combination of slick front tyres and wet rears to deal with the slippery surface.

Officials decided to start the race behind the safety car, though this was called in at the end of the first lap - with Michelisz deciding to hit racing speed halfway down the back straight.

Michelisz duly gapped Panis by two seconds in the opening laps and would end up 2.446 seconds clear of the Comtoyou Cupra driver - who scored his first WTCR podium - at the end of the extended 10-lap race.

On a dramatic opening lap, Guerrieri fought his way forward from ninth on the grid to seventh thanks to passes on Comtoyou Audi driver Frederic Vervisch and, after a tussle in the third sector, the Team Mulsanne Alfa Romeo Giulietta Veloce of Ma Qing Hua.

The Argentinian then dived past Augusto Farfus at the first corner at the start of lap three, and past Girolami and Azcona - now struggling for grip - at the Turn 9 hairpin the following lap.

That was the extent of Guerrieri's progress, though the result did limit his loss to Michelisz and also moved him slightly further clear of Yvan Muller, who finished sixth.

Muller made even more impressive progress through the field from his 16th-place starting position, though his progress was thwarted by the KCMG Honda of wildcard driver Joao Paulo de Olivera. 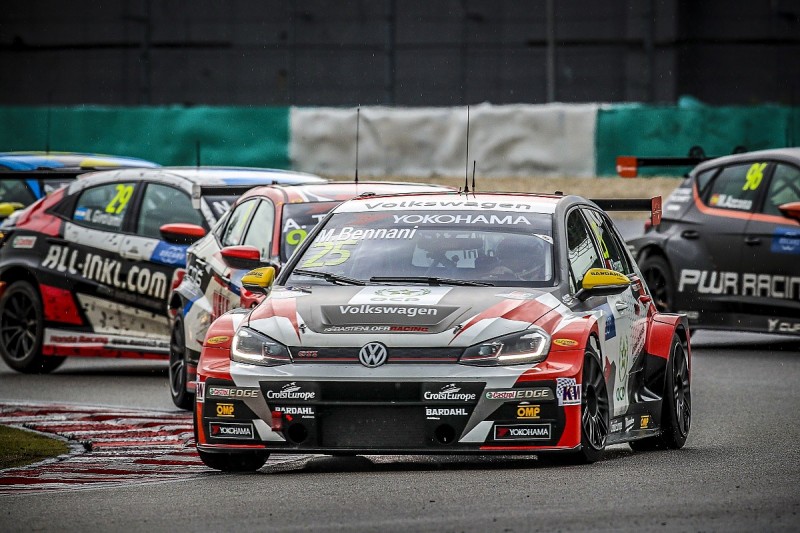 The 2010 Formula Nippon champion advanced from 13th to finish fifth, setting the fastest lap in the process, though his wildcard status means he is ineligible for points.

Though Azcona plummeted out of the points, his team-mate Daniel Haglof finished a fine seventh, ahead of double World Rallycross champion Johan Kristoffersson, who started 17th.