From fourth on the grid, Vernay progressed to second on the opening lap and grabbed the lead in the other side of a safety-car period, then resisted pressure from Muller and Huff for the majority of the race to win in his WRT Audi RS3 LMS.

Huff had dominated both of Friday's qualifying sessions, but after a good initial start he suffered some wheelspin on the run to the first kink, allowing YMR Hyundai driver Muller to work his way around the outside of Huff's Sebastien Loeb Racing Volkswagen Golf GTI.

While Muller held the lead, front-row starters Huff and Esteban Guerrieri were caught on the run to Lisboa by cars behind - with Huff passed by Vernay and Guerrieri dropping to sixth behind the BRC Racing Hyundai i30 Ns of Gabriele Tarquini and Norbert Michelisz.

Munnich Motorsport Honda Civic driver Guerrieri then survived an incident at the right-hander, when he, Mehdi Bennani and Frederic Vervisch collided (pictured below).

That clash, as well as another at San Francisco between Aurelien Comte and Denis Dupont, triggered an early safety car. 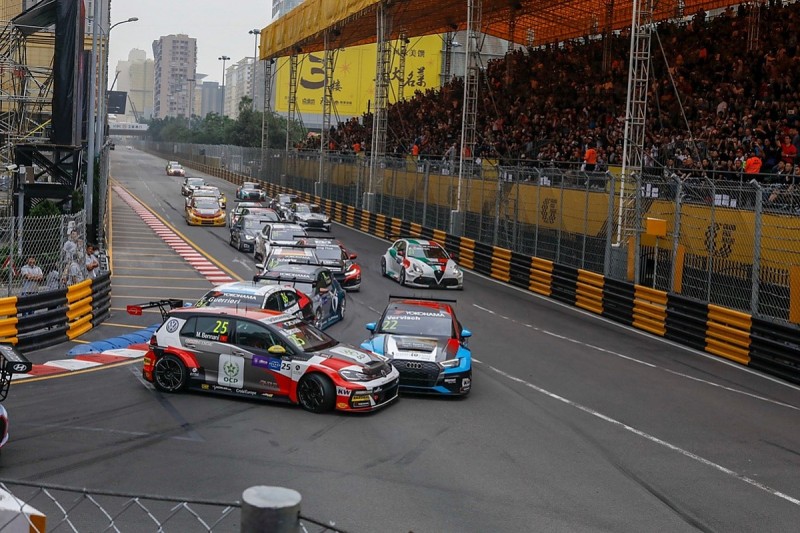 Vernay made his crucial move for the lead when racing resumed one lap later, drafting past Muller on the approach with ease after the restart.

He held Muller off for another two laps before the race was halted for 15 minutes, as a result of Vernay's team-mate Gordon Shedden running wide exiting Police bend and blocking the track for those behind.

When racing resumed, Vernay then spent the remaining four laps defending from Muller and Huff but, despite the chasing pair carrying less compensation weight, the grunt of the Audi on the main straight offered Vernay enough respite each lap, as he came through for his fourth victory of the WTCR season.

Muller's second place allowed him to make up some ground on championship leader Tarquini, although his gain was only six points as Tarquini finished fourth.

Having safely made up three places at the start, Tarquini was backed up by rear-gunner Michelisz - who kept the chasing pack of Guerrieri, Pepe Oriola and Timo Scheider behind.

His fourth place means Tarquini and Muller - who is 33 points behind his rival - are now the only two drivers who can claim the inaugural WTCR crown.

Vernay's win elevates him to third at the expense of Muller's team-mate Thed Bjork - who failed to score and was involved in a collision with Ma Qing Hua and John Filippi on the safety-car restart - but he is 60 points behind Tarquini with 55 left on offer in Macau.