Hyundai World Touring Car Cup hopeful Norbert Michelisz moved into the points lead with his third victory of the season in a wild second race at Ningbo.

The Hungarian was involved in a clash that accounted for long-time race leader Andy Priaulx in the final laps but, despite significant front-end damage to his i30 N, survived the incident to overtake Esteban Guerrieri - who again failed to score a point - in the standings.

Priaulx, starting a World Touring Car race from pole for the first time in almost nine years, beat fellow front-row starter Michelsz into the first corner as the pack bunched up.

It did not take long for contact to start, with Benjamin Leuchter (Sebastien Loeb Racing Volkswagen Golf GTI) and Niels Langeveld both eliminated early on.

Guerrieri's nightmare weekend continued when he was the next car to be taken out of contention.

He had been running in the lead pack and challenging the BRC Hyundai of Augusto Farfus and Thed Bjork's Cyan Racing Lynk & Co 03 when Farfus went sideways and into the path of Guerrieri's Munnich Motorsport Civic Type R, which ended up in the barrier.

Contact further round the lap also accounted for Farfus and Saturday runner-up Ma Qing Hua, whose the Alfa Romeo Guilietta Veloce shed its right-rear wheel, and meant the safety car was deployed before the end of the first lap.

A lengthy clean up period followed, but Priaulx again stayed out of Michelisz's reach when the race resumed at the start of lap six.

But the three-time World Touring Car champion could not shake off the attention of Michelisz or his team-mate Gabriele Tarquini, as the Lynk & Co driver became increasingly robust in his defence of the lead.

Michelisz got a great exit off the Turn 10/11 hairpin on lap 11 of 15 and attempted to go up the inside of Priaulx only for that line to be blocked, before the pair spent the remainder of the lap dicing for position. 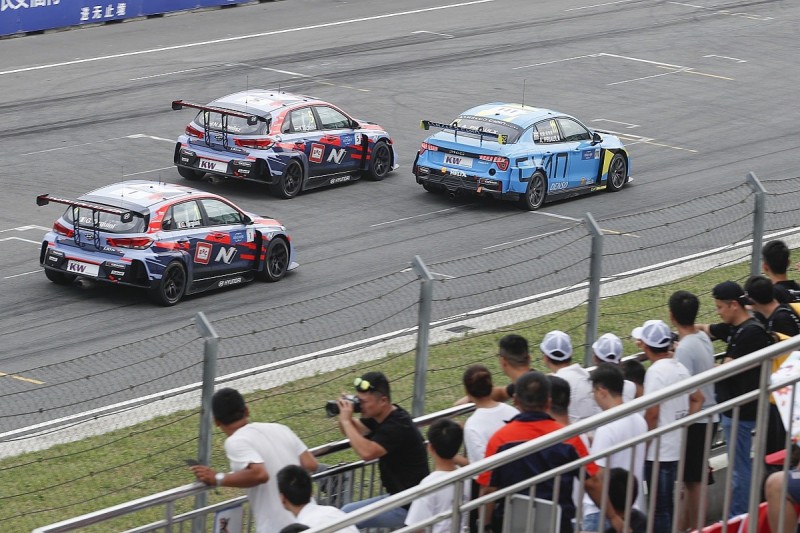 The Hungarian then backed out of a move on the run to the first corner, but would come to blows with Priaulx a handful of corners later.

Priaulx appeared to have picked up a puncture and, as he and Michelisz were both passed by Tarquini, braked much earlier than Michelisz - leaving the Hyundai little place to go but into the rear of he Lynk & Co.

While that clash ended Priaulx's race, Michelisz was able to continue and was given the lead back by Tarquini with two laps remaining, ultimately winning by 0.766 seconds.

As a result, Michelisz now leads Guerrieri by 16 points in the drivers' standings.

Behind Michelisz and Tarquini, race one winner Yvan Muller clinched third in his Lynk & Co 03, though that position might have gone to the PWR Cupra of Daniel Haglof had the Swede not been involved in late contact with the third Hyundai of Nicky Catsburg.

Catsburg had acted as a brilliant rear-gunner to Michelisz and kept the chasing pack at bay, but ran out of line while fighting Haglof for third and tagged the Cupra - allowing Muller and his team-mate Thed Bjork into third and fourth.

Haglof nevertheless crossed the line fifth, ahead of the KCMG Honda of Attila Tassi and Rob Huff (SLR Volkswagen).

Catsburg ended up eighth after losing more positions on the final lap, ahead of Tom Coronel and Kevin Ceccon in the second Alfa Romeo Giulietta Veloce.