In a scrappy reversed grid affair, Chilton grabbed the lead from second on the grid at the first corner and raced away at the head of the field to a second victory of the year in his Citroen C-Elysee.

Chilton's start was marginally better than polesitter Kevin Gleason's, and first was the Briton's midway through the first corner when Gleason half-spun in his RC Motorsport Lada Vesta.

Yann Ehrlacher briefly gave chase in his Vesta, but Chilton was untouchable at the front of the field and eventually raced away to win by 13 seconds.

With Chilton checked out at the head of the field, attention turned to a three-car scrap for second between Ehrlacher, championship leader Thed Bjork (Volvo S60 Polestar) and Honda stand-in Esteban Guerrieri.

Ehrlacher was quickly reeled in by the Volvo man, but Bjork's reluctance to pass the Lada brought Guerrieri into play.

Things came to a head three laps from the end of the 11-lap race, when Bjork finally made a move for second and briefly got the position, only for Guerrieri to get involved.

The Argentinian, replacing the absent Tiago Monteiro at Motegi, passed both Ehrlacher and Bjork in one move around the outside of Turns 5 and 6.

That still left the door open for Bjork, though, and the pair made contact that sent Guerrieri sideways off Turn 8 as he tried desperately to fend off the Volvo to assist temporary team-mate Norbert Michelisz's title bid.

That clash allowed Ehrlacher back through, and the chasing pair held station thereafter with Guerrieri third behind Ehrlacher at the finish.

Bjork made the finish unscathed in fourth, and was the only Volvo driver to finish the race without incident after team-mates Nicky Catsburg and Nestor Girolami were both handed drive-through penalties for contact with Honda drivers. 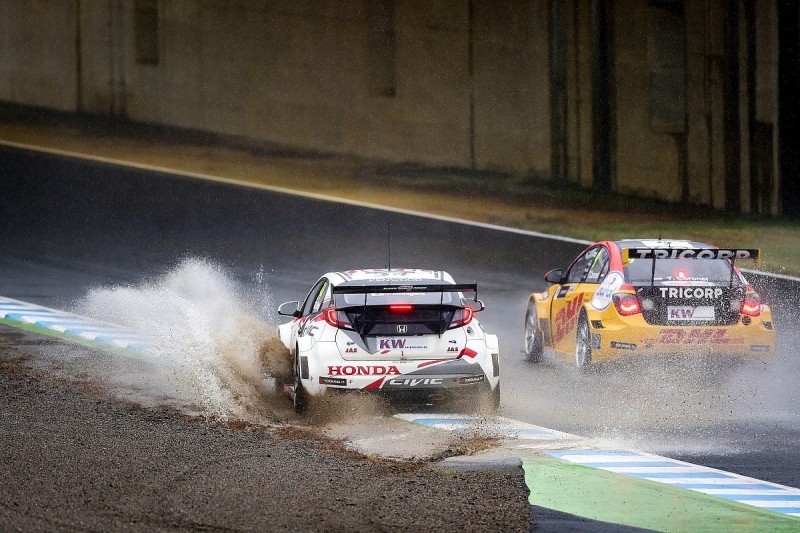 Catsburg tagged the third Honda Civic of Ryo Michigami as the pair both made their way through the field after engine changes put them at the back of the grid, while Girolami was punished for contact that delayed Michelisz.

Michelisz had cleared the second SLR C-Elysee of Mehdi Bennani with a brave move at the Turn 5 right-hander that passes under the oval circuit and looked set to capitalise on a mistake from Girolami at the end of the back straight, but was tapped into a half-spin at the slow kink at the end of the lap as he moved across onto the racing line.

With the two Volvos subsequently demoted, Michelisz was able to recover some ground and took the flag in seventh, behind Bennani and polesitter Gleason and ahead of Rob Huff after a bold pass around the outside of the Brit's Munnich Motorsport C-Elysee at Turns 5 and 6.

Catsburg eventually came home ninth, ahead of the delayed Michigami.