Norbert Michelisz 'exhausted' after missing out on WTCC title

Michelisz recovered from a 32.5-point deficit - after his Honda team was excluded from the China round in early October - with victory in Japan and a second place in Macau and started the final round 6.5 points shy of Bjork in the drivers' standings.

But his title challenge unravelled when he suffered a master cylinder failure in the second part of qualifying that snapped his brakes on and limited him to 11th on the grid for both Qatar races.

Michelisz had earlier been fastest in both of Thursday's practice sessions and Q1.

With overtaking opportunities at a premium on the Losail circuit, Michelisz managed ninth in the opening race and finished the main event eighth as Bjork sealed the title.

"It's really difficult; I feel totally exhausted," Michelisz told Autosport of his defeat.

"I always try to be positive to the outside, not really saying there's not a realistic chance to fight for the title.

"If I'm honest with you, Japan was really difficult after we received a message over the exclusion.

"It wasn't easy, the last two months, but always when there was some bad news came some good results like pole position [at Motegi], race wins, and closing the gap in the championship. This gave me a lot of energy, a boost.

"[But] right now I feel really, totally exhausted. I tried to give it everything. 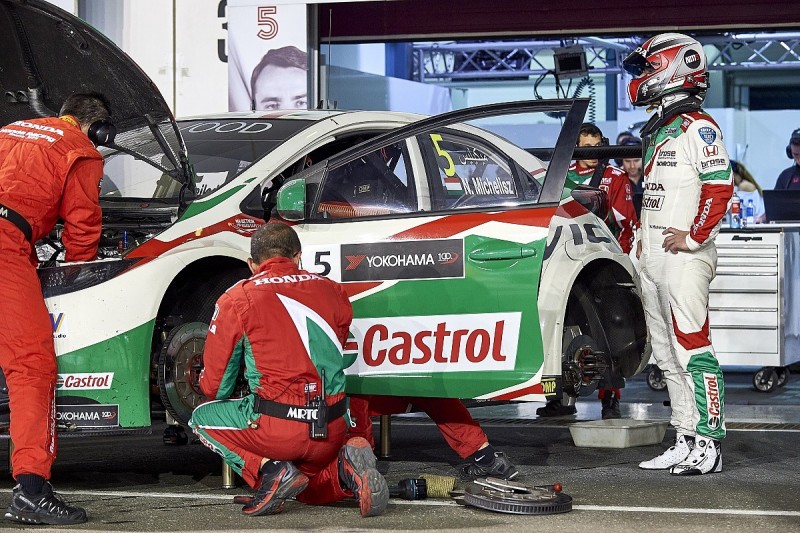 "The pressure the last couple of days was really high, I was trying not to think about the championship but it wasn't easy.

"To lose out under circumstances like this is difficult to handle, but I'm sure in a couple of days I'll be much more relaxed.

"I had bad luck in WTCC, but on the other hand it was the best year of my life so far with having my daughter, setting up a racing team [TCR outfit M1RA] and having success, enjoying life at home."

Michelisz, who spent the majority of race two behind Volvo's Yvan Muller, said he still believed he had a realistic shot at the title ahead of the first race before realising how difficult overtaking would be.

"I was disappointed, especially after the first race," he added.

"I truly felt with some luck I could turn it around but realising that it's almost impossible to overtake, I already felt it was going to be difficult.

"I don't think that second race decided the championship or me not being able to overtake Yvan.

"To struggle in qualifying and not be in the top 10 on a place where you cannot overtake is a big blow.

"You have some circuits where it's easy to overtake - you have two or three places where you know taking a decent amount of risk you can go for it. But this is not the place."