Neuville had controlled Saturday's action, extending his lead to over 40 seconds despite taking an extra spare tyre in case of punctures.

But he crashed on the end-of-day superspecial stage, losing a wheel and any hopes of a first win in Sweden.

He had been leading Rally Monte Carlo in January before hitting a post, also on Saturday's final stage, which broke his suspension.

Hyundai aims to fix the car overnight before sending Neuville back out under Rally2 rules on Sunday, when he will have the chance to score points in the powerstage.

What had been shaping up to be a three-way battle for second is now promoted to the lead fight, with 16.6s covering the group entering Sunday's final three stages.

After a succession of quickest stage times on Saturday morning, Ott Tanak clawed away at Latvala's advantage all day, reducing it to 3.8s after the superspecial. 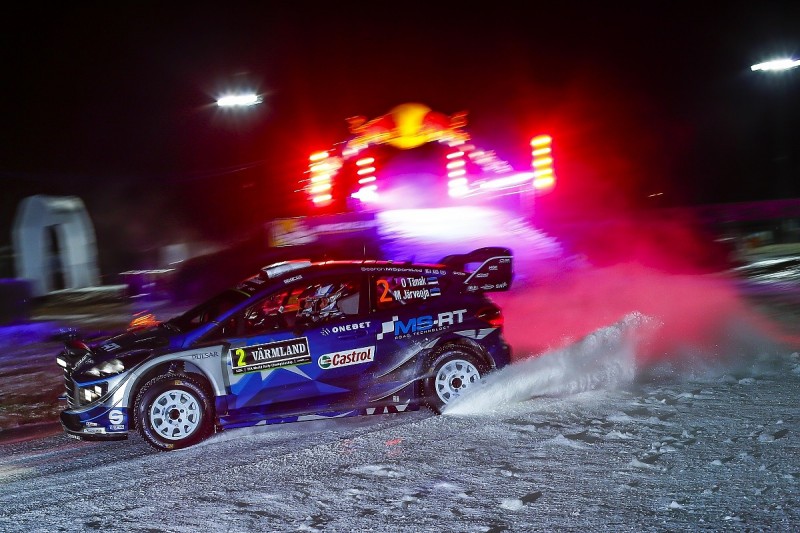 The M-Sport driver also has one eye over his shoulder as team-mate Sebastien Ogier began to claw back time on Saturday afternoon.

The four-time WRC champion cleaned the road on Friday and was unimpressive on Saturday morning compared to Fiesta colleague Tanak, but he came alive in the afternoon to sit third, 12.8s behind Tanak going into the final day.

Dani Sordo drove consistently on Saturday afternoon, pushing where he felt comfortable in his Hyundai i20.

The Spaniard moved up earlier in the day thanks to his team-mate Hayden Paddon falling down the order with powersteering failure.

Missing from the top 10 was Breen's team-mate Kris Meeke, who crashed out of fifth place on Saturday afternoon.

The Northern Irishman - who also crashed out of Monte Carlo - was caught out on a crest and went straight on at a slow-speed left hander on the second Hagfors test.

He got going again after losing over eight minutes, with spectators pushing his beached car back onto the road.

Pontus Tidemand continues to lead WRC2 by over a minute in his works-backed Skoda Fabia R5.

Follow the conclusion of Rally Sweden from 06:55am UK time on Sunday on Autosport Race Centre Live.