Neuville starts the event 27 points clear of nearest rival Sebastien Ogier and says his priority is to further that advantage rather than trying to become the first Belgian to win the event.

The Hyundai driver runs first on the road on Friday's opening loop of gravel stages and anticipates extremely difficult conditions as the hot summer continues.

"At the last round in Sardinia, we thought it could be bad, but then the rain came and it helped," said Neuville.

"This time, there is no rain coming unfortunately.

"Without any water to wash the loose away, it will be tough tomorrow.

"Stage two, three and six in particular, we will lose a lot because it's so dry.

"This is a part of the job and we have to handle it. The most important thing is that the difference between us and him [Ogier] is small.

"We know we are going to suffer a little bit but, at the same time, we all know where my focuses are.

"It's going to be to fight for the championship. I need to take some important points this weekend, try to be ahead of Ogier if possible and manage the gap."

Neuville will be keen to erase the memory of last year's event, where Ogier retired and he failed to capitalise on the Frenchman's mistake and finished a low-key sixth. 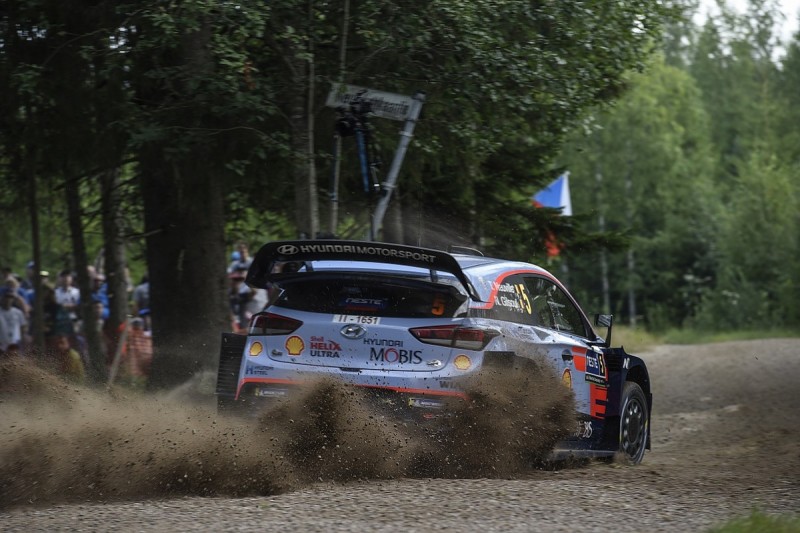 The Hyundai struggled for pace in Finland in 2017 but Neuville is confident it will be more competitive this year.

"We already saw at the end of last year the car was improving," said Neuville.

"We introduced the new aerodynamics, which are definitely one of the most important factors here in Finland.

"We have made small changes - like in the suspension - which will help things."

Last year's Rally Finland winner Esapekka Lappi has admitted starting fourth on the road on Friday could rule him out of back-to-back wins at home.

"I will try for sure, starting fourth I'm not suffering as much as Thierry from the road position, but still it's not the best position," said the Toyota driver.

"The roads will get better and better [for cars further down the field].

"It will be tough and very difficult to repeat the win this year. It's a big challenge."